There is little evidence to lend credence to or discredit the argument that development aid undermines political accountability. In Tanore district of Bangladesh, researchers tested the impact of providing external subsidies for sanitation projects on the behavior of local leaders and, subsequently, on constituents’ perception of their performance. They found that while constituents credited leaders for the sanitation program when the funding source was unknown, they did not credit local leaders when funding information was made transparent.

There are conflicting arguments about whether foreign aid benefits developing countries. Some argue that more aid is needed to address poverty, while others believe that aid undermines political accountability, making it hard for voters to distinguish between bad and good leaders. The latter theory assumes that constituents have difficulty distinguishing between the effects of leadership skill and externally-financed development aid. As a result, they are likely to give undue credit to their leaders for development programs that are actually supported by external aid. While some existing evidence supports the claim that constituents cannot always separate the actions of leaders from unrelated factors that increase community or individual well-being, there are also theories that suggest leader behavior and constituent perceptions of leaders’ performance may affect each other. Can providing information to constituents about the source of a benefit to their household or community help them correct misconceptions about their leaders’ performance?

The study was conducted in the rural areas of the Tanore district in the north-west of Bangladesh. Though sanitation coverage has increased over the last decade, the district still lags behind in sanitation indicators. Of households surveyed, 31 percent reported open defecation or an unimproved latrine as their defecation site, and only 34 percent owned or had regular access to a hygienic latrine. In response to these sanitation issues in Bangladesh, organizations such as Wateraid-Bangladesh and Village Education Resource Center (VERC) work in collaboration with the poorest and most marginalized communities to set up lasting solutions to water, sanitation and hygiene problems.

This study was conducted in four of seven sub-districts (unions) within the Tanore district. Within each union, the highest level local leader is the Union Parishad (UP), who is elected by his constituents. The experiment covered all communities in these four unions to ensure that the program was concentrated enough in a geographic area to affect and track leader behavior. 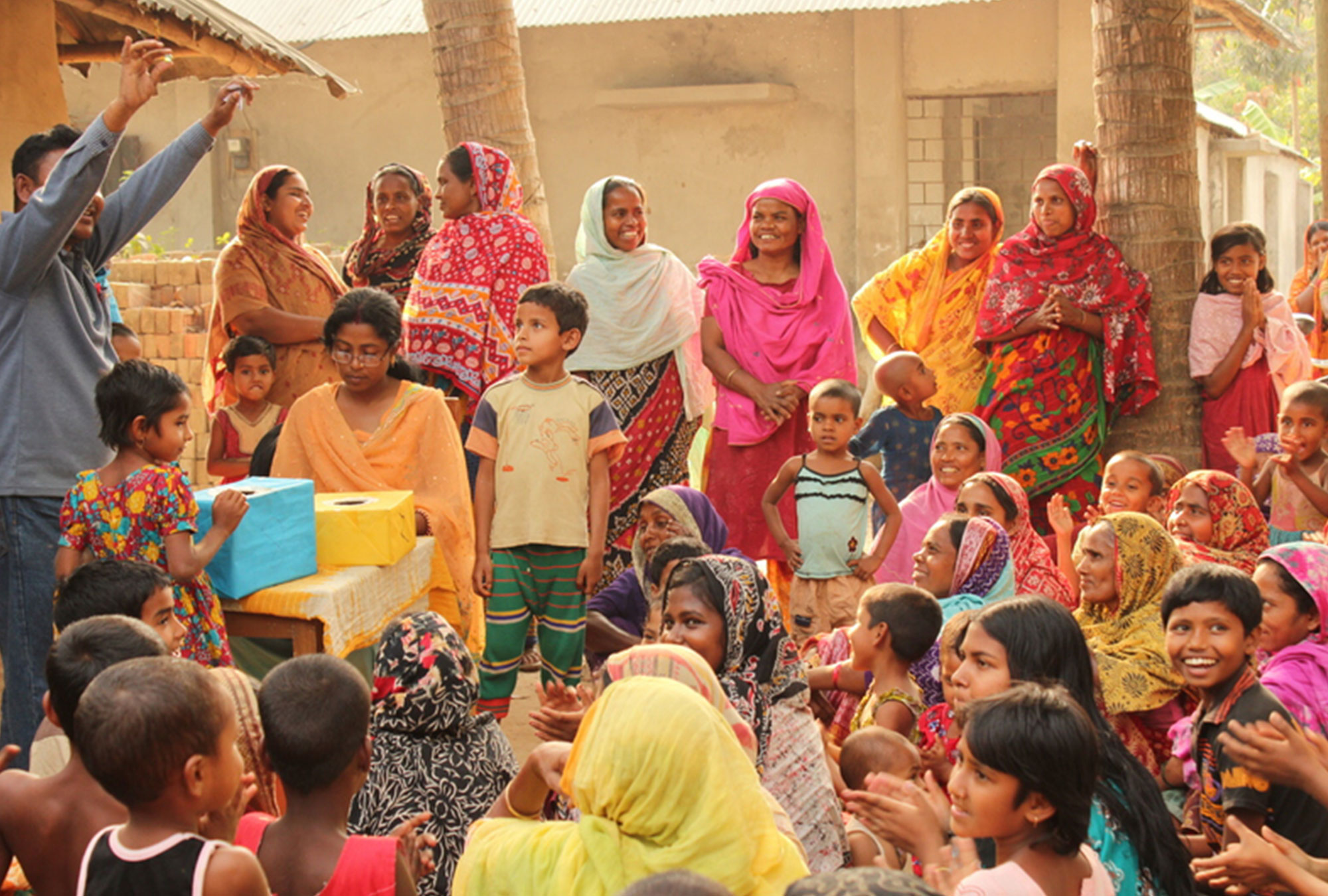 Researchers conducted a large scale randomized evaluation to test how leaders respond to externally funded sanitation programs in their communities, and how constituents subsequently assess their local leaders’ performance. The study sample consisted of 16,603 households in 97 villages. Each sub-district consisted of approximately 25 villages, and each village had 150-220 households.

Villages were randomly assigned to receive one of two interventions: (1) a community motivation campaign, called the Latrine Promotion Program (LPP) or (2) the LPP plus subsidies for the purchase of hygienic latrines. A third randomly selected group received neither program and served as the comparison group.

Latrine Promotion Program (LPP): Implemented in collaboration with Wateraid- Bangladesh and Village Education Resource Center (VERC), LPP involved a multi-day exercise run by VERC health monitors to raise awareness of the problems of open defecation and non-hygienic latrines. Emphasizing that sanitation is a community level problem, the program focused on ending open defecation, and doing so through the use of hygienic latrines.

LPP + Latrine Subsidies: A subsidy that covered 75 percent of the costs of the parts to install one of three types of hygienic latrines was randomly assigned by lottery to households in subsidy villages. Households were eligible to receive a subsidy if they owned 50 decimals of land or less, which represents the poorest 75 percent of the population in these villages. Vouchers were distributed by public lottery approximately two weeks after the LPP campaign took place.

In order to test whether households update their beliefs based on new information, researchers ran a second information campaign in subsidy villages following the LLP and latrine voucher lottery. A subset of households was randomly selected to hear one of two scripts with details about the sanitation program. The first script attributed the intervention to a research project without explicitly mentioning the role of the leader, while the second script explicitly stated that the government played no role in funding the intervention or in selecting beneficiary villages.

Leaders responded to having an externally funded toilet subsidy program in their villages, and were more likely to spend time in subsidy villages. Reported satisfaction with leaders in subsidy villages was higher relative to villages only receiving the LPP program. Nevertheless, while constituents credited leaders for the sanitation program when the funding source was unknown, they did not credit local leaders when funding information was made transparent.

Village level results:
Leader behavior: Leaders spent more time in subsidy villages after the program was implemented. Leaders showed up more often in villages where subsidies were implemented and also interacted more with the community once they showed up – constituents in LPP + subsidy villages were 10 percentage points more likely to have seen or interacted with their leaders than in LPP only villages. This supports the hypothesis that certain leaders respond to externally funded programs in their community, which in turn may affect constituent perception.

Constituent perception: Villages receiving only LPP showed some increases in sanitation investments, and greater overall satisfaction with access to sanitation relative to comparison villages. Moreover, providing subsidies led to greater investment in sanitation and even greater satisfaction. However, LPP communities became less satisfied with leader performance relative to comparison villages. On a scale of 1-10, reported satisfaction with leaders in LPP villages was 0.6 points less than in comparison villages. Researchers hypothesize that the information campaign armed constituents with greater knowledge of the problems of open defecation and highlighted the need for community level investment, which in turn led to greater political accountability. In contrast to the LPP only program, providing the subsidy had a significant positive effect on constituent perception of leader performance – reported satisfaction in subsidy and LPP villages was 0.6 points higher on the 10 point scale than in LPP-only villages.

Household level results:
Leader behavior: Within subsidy villages, winners of the latrine voucher were no more likely to see leaders than lottery losers. When it was clear that the allocation of vouchers was due to lottery, leaders had no incentive to spend more time with lottery winners over losers.

Constituent perception: Within subsidy villages, winners are no more likely than losers of the subsidy to attribute credit to their leaders for meeting their sanitation needs. Constituents understand that the benefits of the public lottery are due to random chance. Additionally, informing villagers about the true source of the subsidy appeared to eliminate the excess credit that the residents of subsidy villages previously assigned to leaders. Hence, constituents incorrectly attributed credit to leaders when the source of a program remained uncertain; however, when villages were informed of the true source of the subsidies, households no longer assigned credit to leaders when credit is not due. These results indicate that political accountability is not easily undermined by development aid when information is transparent.