Returns to Apprenticeship Training in Ghana

Youth unemployment—an acute problem in Sub-Saharan Africa—is an important policy concern. This study measured the impact of a government apprenticeship program for youth in Ghana on wages, employment, skills, fertility, migration, and other outcomes. Four years after the program was launched, there were limited improvements in labor market outcomes such as total earnings and hours of work. The program shifted youth out of wage work and into self-employment, especially women. There were some promising patterns among women working in the hairdressing and beauty sectors, but limited effects in garments and construction trades. In part this is consistent with the greater training completion rates among hairdressers compared to garments and construction trades who were more likely to still be in training. Skills increased and durable assets increased, especially among hairdressers. The results suggest that apprenticeship programs can provide youth with skills and transition them into self-employment. However, a longer-term follow up would be needed to better estimate the returns in earnings from the program.

Youth unemployment is an acute problem in low-income countries, and especially in Sub-Saharan Africa.1 Young people account for 60 percent of the unemployed in Sub-Saharan Africa, and 72 percent of young people between the ages of 15 and 24 live below the $2 a day poverty line.2 A lack of necessary skills is often cited as contributing to high unemployment. However, traditional job training programs, such as training through public vocational institutions, have been shown to provide low labor market returns on average.

Apprenticeship training with private-sector firms has the potential to cost-effectively expand labor market opportunities for young people by providing them with relevant on-the-job experience and market-ready skills. However, evidence on the impact of apprenticeship training is limited, and open questions remain about its effectiveness. In Ghana, as in other poor countries, productivity (and likely, training ability) varies greatly across businesses. In addition, providers of on-the-job training may focus on firm-specific, rather than general, skills. Firms may also seek to retain apprentices at a skill level that is profitable for the business but makes them less than employable elsewhere.

In 2012, 26 percent of people in Ghana between the ages of 15 and 24 were unemployed.3 These employment challenges are driven in part by limited labor market skills among Ghanaian youth. The skills deficit in Ghana is partly driven by an education system in which a large number of students fail to progress beyond junior high school. Access to senior high school is based on performance in national examinations and places are often limited: in 2011/2012, only 50 percent of qualified students transitioned to senior high school, and the gross enrollment ratio for senior high school was only 37 percent.4 The gross enrollment ratio in public technical and vocational training institutions was just 3.5 percent. Limited capacities at schools and training institutions, combined with costly fees, prevent many young people from furthering their education and improving their skills.

The National Apprenticeship Program (NAP) is a training program initiated by the Council for Technical and Vocational Education and Training (COTVET), and implemented by district-level coordinators of the Ghana Education Service, in close partnership with craft-specific trade associations. 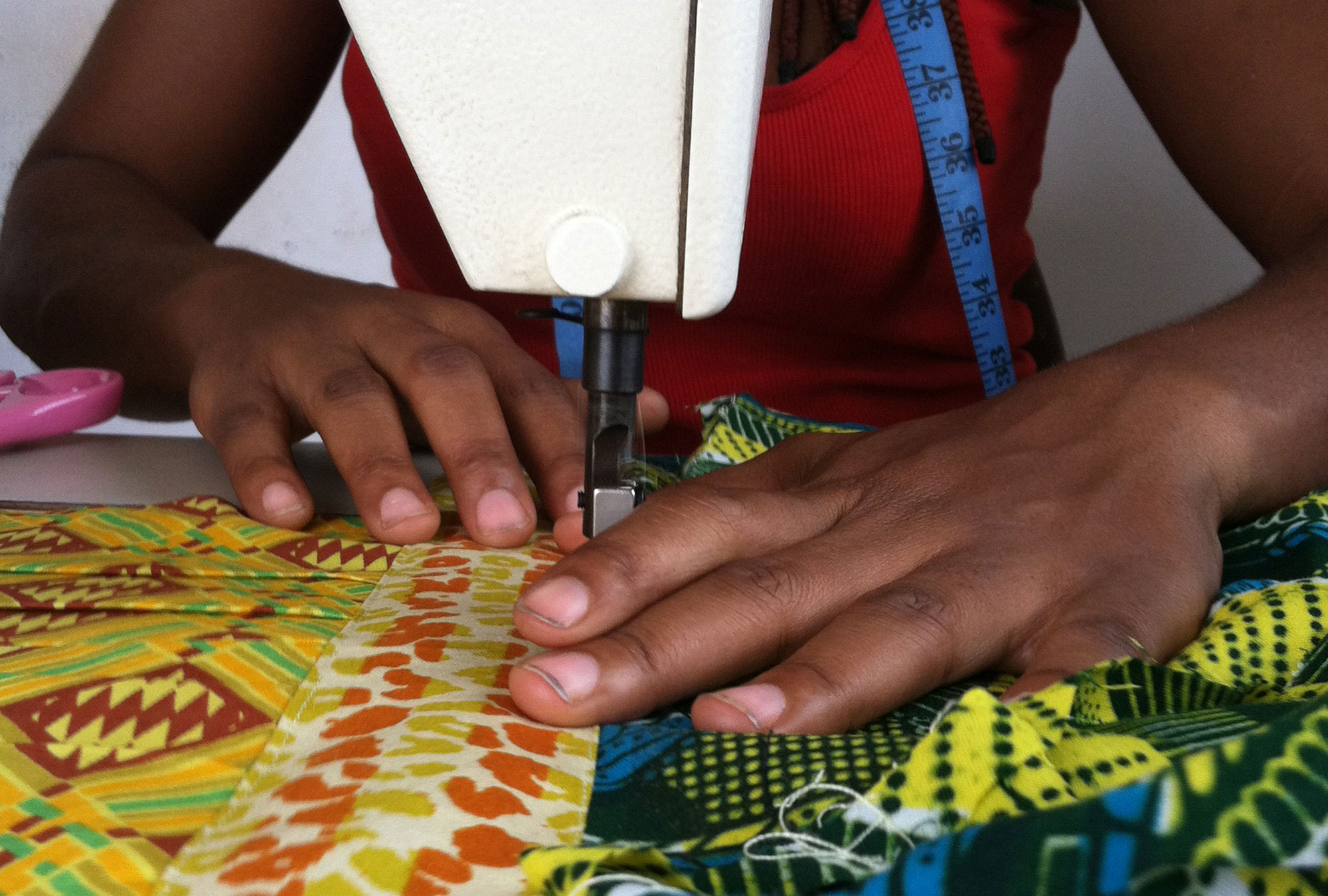 A tailoring apprentice in Ghana using an overlocking sewing machine. The use of these machines requires specialised skills and can increase tailors' earning potential. Photo: Morgan Hardy | J-PAL

Researchers used a randomized evaluation to measure the impacts of a national apprenticeship program on labor supply, wages, skills, and employment, as well as consumption, fertility, migration, and other outcomes. The evaluation also examined whether characteristics and effort of the training firm made a difference in labor market outcomes.

In 32 nationally-representative districts across all 10 regions of Ghana, researchers collaborated with COTVET and local district officials to randomize the selection of participants in the apprenticeship program from the pool of 3,928 applicants. Those applicants who were not selected for treatment served as the comparison group. Program apprentices were then randomly assigned to master trainers’ businesses that matched their trade and geographic preferences. Although training was designed to last for one year, most NAP apprenticeships lasted three years or longer, a timeline that is similar to traditional apprenticeships in Ghana. The program offered participants the opportunity to training in construction, garments, and hairdressing/beauty. This resulted in gender segregation with men training in construction and women in garments and hairdressing/beauty.

Participating businesses and their owners have a wide range of characteristics, which enabled researchers to measure whether certain business-level characteristics were associated with higher-quality training (as measured by self-reported progress throughout the program, and apprentice attendance, retention, and completion) and higher labor market returns upon completion.

Researchers are still analyzing data for a complete analysis — all results reported below are preliminary.

Take-up and completion: Compliance with the apprenticeship program was low, and 62 percent of youth assigned to the comparison group began an apprenticeship offered outside of the NAP program. Overall, youth who were randomly selected to participate in the NAP program were almost 10 percentage points more likely to complete an apprenticeship. This translates to a 40 percent increase compared to the control group average completion rate. These completion effects were driven by women in the garment-making and hairdressing trades. Surprisingly, at the time of the follow up (almost four years after training started), most men were still in their apprenticeships (in construction). This lag likely explains much of the differential impacts by gender and occupation described below.

Employment: Access to the program reduced wage employment for men and women and increased self-employment in some groups, particularly among women in the beauty sector (who graduated from the apprenticeships first). Men (in construction) were also more likely to be in training and less likely less likely to be working in agriculture.

Earnings: Treated men (in construction trades) experienced lower wages than men in the comparison group, likely because 33 percent of the males who took up the program were still in their low-paid apprenticeships at the time of the follow-up survey. Twenty percent of women in the garment industry were also still in apprenticeships at this time and also experienced lower wages. Women in hairdressing also saw reductions in wages, however, these declines were offset by increases in self-employment earnings. Since the increases in self-employment were concentrated among women in hairdressing who had the highest completion rates and had completed their training earlier than the other trades, it is possible that the overall labor market outcomes for the NAP program would be stronger in the future. Researchers theorize that apprentices may be stagnating, in some way, in their path to self-employment possibly due to lack of start-up capital in the more capital-intensive trades of garments, and especially, construction. Additional data would be needed to better estimate the returns in earnings to the program once participants have had time to fully transition into paid jobs.

Durable assets and consumption: The program had no impact on durable household assets for women on average and a negative impact on men. It appears women in the beauty sector (who had been out of their apprenticeships longest) had more durable assets. Researchers theorize men may have sold assets to support themselves during their training.

Skills: Apprenticeship training increased trade-specific skills and general job skills used in self-employment (including reading, calculating, and using a computer). Given the importance of skills in the labor market, researchers considered this an encouraging sign for participants’ future labor market outcomes.

Marriage and fertility: The program had no effect on fertility except for women in the cohort who had been out of their apprenticeships longest (the beauty industry), which is consistent with their better labor market outcomes.

Migration: Those offered the program were not more likely to have migrated than those in the comparison group on average, but it appeared women in beauty sector cohort who had been out of their apprenticeships longest migrated at a higher rate. The probability of migration was higher in rural areas than in urban areas.

Mental health: The program had no impact on mental health of men or women on average. Consistent with the other findings, however, women in the beauty sector appeared to have improved mental health.

Overall, these results suggest that apprenticeship programs can provide youth with skills, and may encourage youth to shift into self-employment. Although no earnings gains were found in the short run, earnings may increase in the long run given the increase in skills and the emerging patterns on migration, fertility, and durable assets among women. Focusing on the skills outcomes, and assuming that the program costs were driven by the fees paid to trainers, the program raised scores on a skills test by 0.42SD per US$100. A further round of data collection would be needed to better assess the impact of the program on the labor market.