The Sustainable Development Goals set a triple educational objective: improve access to, quality of, and gender equity in education. In line with this goal, researchers conducted a randomized evaluation to measure the impact of a multifaceted educational program on school enrollment and learning in rural Rajasthan. Results showed that the program increased girl’s enrollment in the first and second years reducing the gender gap in school retention. Boys and girls both had improvements in learning in the first year.

The United Nations’ Sustainable Development Goal 4 proposes that by 2030 “all girls and boys complete free, equitable, and quality primary and secondary education.” This ambitious goal sets a triple objective for educational policies: improving free access to, equity in, and quality of learning. However, existing education evaluations tend to only assess the impact of one input at a time. To address this evidence gap, researchers implemented a multifaceted education program with multiple objectives in India to enroll marginalized girls and improve student learning. Can a program with multiple objectives achieve both goals at the same time?

In Rajasthan, India, as of 2011, only 48 percent of students in grades 3–5 were able to read a grade 1 text in public schools, and only 33 percent were able to do subtraction. Furthermore, almost 5 percent of girls aged 7–10 did not go to school, more than double the number of out-of-school boys. This gender gap in schooling widens as children get older, often due to cultural and social norms such as marriage. As of 2012, 57.6 percent of women were married before the legal age. To address this issue, in 2012 Educate Girls, an Indian-based NGO introduced a multifaceted education program: door-to-door campaigns, training volunteers to teach activity-based and playful learning, and working with members of the community to promote girls’ education. 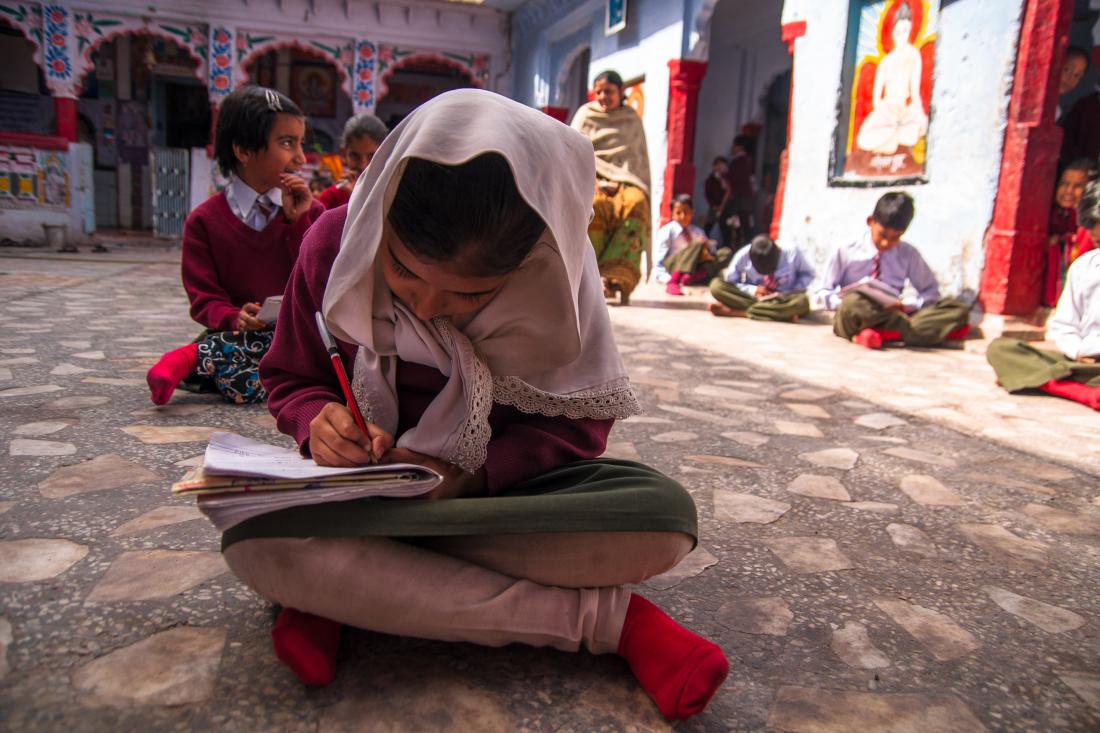 Researchers conducted a randomized evaluation to test the impact of a multifaceted education program on student enrollment and learning in Rajasthan, India. The evaluation was conducted in 230 primary schools in 98 villages. Using a random number generator, researchers assigned 49 villages (117 schools) to the treatment group and 49 villages (113 schools) to the comparison group. Schools in the treatment group received a combination of the following interventions:

The intervention was conducted from 2011 to 2014. Researchers measured the impact of the program on student enrollment and learning, and whether or not the program had different effects on girls and low-performing students.

The program significantly increased girls’ enrollment in the first and second years. and learning in the first year. However, results did not persist into the second year.

Learning: There was a significant gain in scores among both boys and girls on tests covering Hindi, English, and Math in the first year. Students who received the multifaceted program performed 0.32 standard deviations higher than those in comparison schools and were 22.7 percentage points more likely to improve from the pre-program test, with no differences by gender. Students with higher pre-program test scores experienced greater learning improvements than students with lower pre-program test scores. This suggests that low-performing students did not benefit from the program.