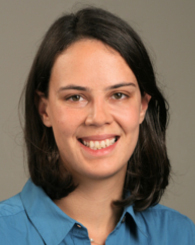 Cynthia Kinnan is an Assistant Professor in the Economics Department at Northwestern University.  Her research focuses on the interaction of networks and access to financial systems in the developing world.
Kinnan holds a Ph.D. from the Massachusetts Institute of Technology (MIT).

My freshman year I also took my first trip outside North America, to Nanjing, and the contrast between China's development experience and the greater horn countries' made a big impression. Wondering whether China's experience could (or should) be translated to Africa, and more generally how to figure out "what works" led me to development economics.

I was on the debate team in college, and my freshman year the topic was increasing development assistance to the greater horn of Africa. In researching the topic, I was amazed that many prescriptions for, and polemics against, development assistance seemed to have no rigorous evidence behind them (this was 1999, pre-J-PAL!). My freshman year I also took my first trip outside North America, to Nanjing, and the contrast between China's development experience and the greater horn countries' made a big impression. Wondering whether China's experience could (or should) be translated to Africa, and more generally how to figure out "what works" led me to development economics.

Co-authors Gabriella Conti, Kosuke Imai, Anup Malani, Anuj Shah and Alessandra Voena and I are working on a project that will evaluate the impact of inpatient health insurance in Karnataka, India. It's the largest evaluation I've worked on—12,000 households across two districts 700 km (430 miles) apart. It has the potential to answer what I think are some first-order questions: Can an at-scale health insurance product affect households' health, financial portfolios, decision-making and wellbeing? How much do households value the insurance, and does valuation change over time as health shocks, and experience with healthcare, are realized? Are there spillover benefits from insured to uninsured households within a village? Enrollment is happening now, and we'll follow households for two years--we hope to have year-one results by early 2016.

Misaligned incentives seem to play a big role in why "good" policies don't get adopted: the incentives of the policymakers or interest groups who effectively decide on trade liberalization, education reform, immigration reform, etc. might be very different from the incentives of the population as a whole. If it were feasible (which it's not) I would love to evaluate "bonds" that would give policymakers and those negatively affected by reform a share in the increase in total output generated by the reform. For example, farmers who benefit from agricultural tariffs would get a share of the gains from removing tariff barriers; or teachers would get a share of the gains from adopting "better," but harder-to-teach, curricula. (Saumitra Jha has some really interesting research looking at a similar idea as it played out in Meiji Japan.) Just the first step of figuring out how the gains would be measured and turned into a money metric would be a fascinating project in itself.

What is your craziest story from the field?

For lab experiment I worked on in Karnataka, India, we went to villages, asked people to take part in our experiment, and then, at the end, paid them based on their choices. In the first village we piloted in, the experiment took longer than expected, and it got dark before we finished making payments. The classroom we were working in didn't have lights (it wasn't usually used after dark), so we found ourselves making payments—from a backpack stuffed with small bills—by candlelight, while the people waiting to be paid got more and more impatient—they needed to get home to milk their cows or cook dinner for their kids. It was a memorable lesson in keeping field activities as short and sweet as possible.

News
Moving beyond microcredit
Microcredit doesn't live up to promise of transforming lives of the poor, 6 studies show
Evaluaciones
The Impact of Family Planning Training on Private Sector Health Care Performance in Nigeria
The Value of Health Insurance: A Randomized Evaluation in India
The Effect of Mobile Money On Adopters’ Social Networks in Tanzania
Midiendo el Impacto de las Microfinanzas en Hyderabad, India
Publicaciones
Social Networks as Contract Enforcement: Evidence from a lab experiment in the field.
Can Microfinance Unlock a Poverty Trap for Some Entrpreneurs?