The Effect of Election Officer Identity on Voting Outcomes in India

Management and administrative processes during elections—including the staffing of polling stations on election day—can have important impacts on election results and policy choices. During the 2014 parliamentary elections in Bihar, India, researchers leveraged a national policy that randomly assigned election officers to polling stations to examine whether the identity of polling station officers affected voter behavior and voting outcomes. The identity of polling station officers significantly impacted voting outcomes: more diverse officer teams increased the vote share for the minority-oriented coalition, with stronger effects when officers had greater discretion over the voting process. Researchers found suggestive evidence that the effects were driven by identity-based bias in the decision-making of election officials.

Free and fair elections are critical in maintaining the accountability and responsiveness of elected officials to their constituents. Management and administrative processes during elections—including the staffing of polling stations on election day—can have important impacts on election results and policy choices. For example, the identity of election officials may influence election outcomes in contexts where individual ethnic or religious background strongly aligns with particular political parties. Firstly, if election officials working in polling stations have discretion over the verification of voter identity, officers could behave with bias, possibly disenfranchising qualified potential voters or enfranchising unqualified individuals. Secondly, officials may selectively allow members of the party they support to attempt to influence potential voters, either through illicit persuasion or intimidation around the polling station.

Even in the absence of inappropriate behavior by the election officers, their presence at the polls could influence voter behavior if potential voters can identify the religious or ethnic identity of the officials. If a team of election officers all identify with the same group, this homogeneity could amplify the influence of the officials’ identities. How does diversity, or lack thereof, of the staff at polling stations on election day affect voting outcomes?

In Bihar, the location of this evaluation, certain religious or caste groups consistently align with specific political parties. As of the 2011 Bihar census, Hindus constitute the religious majority with 83 percent of the population. Muslims are the largest religious minority with 17 percent of the population.1 Elite Hindu castes, which are less than 15 percent of the population in Bihar, tend to align with the Bharatiya Janata Party (BJP) party. In the 2014 elections, approximately 78 percent of upper-case Hindus voted for the BJP. Yadavs (a non-elite Hindu caste, designated Other Backward Class by the national government) and Muslims traditionally support the Rashtriya Janata Dal (RJD) party. Roughly 64 percent of both Muslims and Yadavs voted for the RJD coalition in the 2014 election. The BJP and RJD parties—two of the five major parties in Bihar during the last decade—consistently oppose each other. 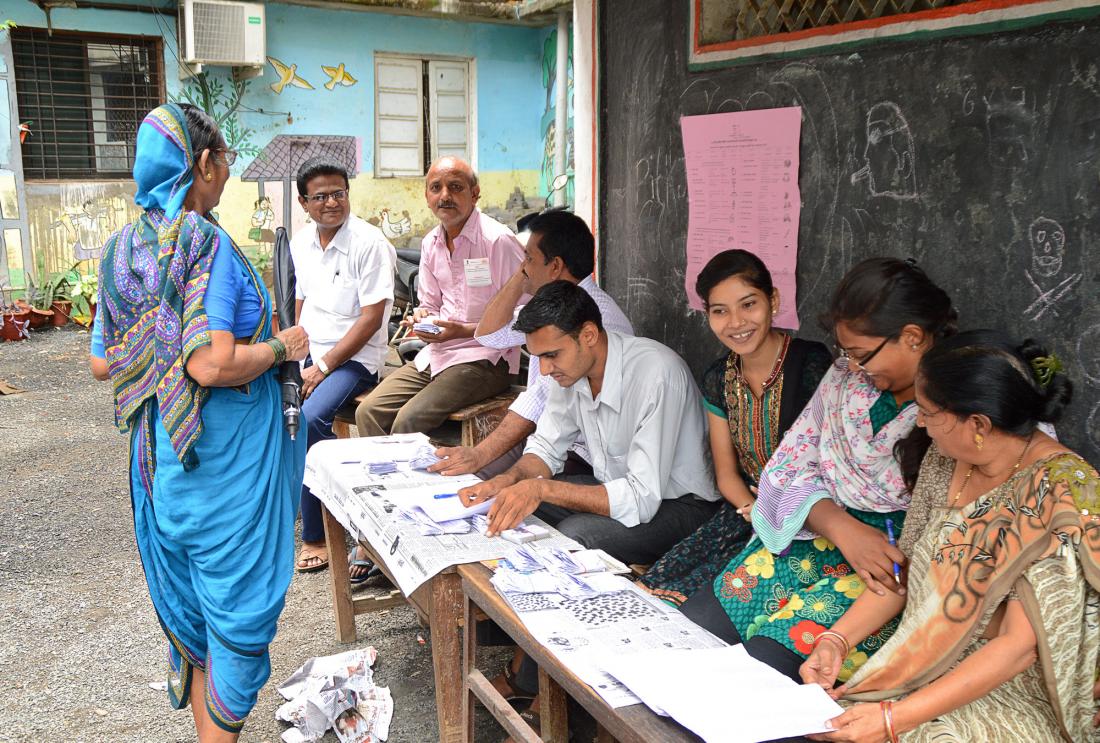 Researchers examined the impact of the identity composition of polling station officers on voter behavior and voting outcomes during the 2014 parliamentary elections in Bihar, India. This election covered two districts, with approximately 5,561 polling stations, 23,384 officials, and 5.6 million registered voters. The study leveraged the existing national policy that mandates the random assignment of election officers to polling stations.

In every election, teams of three to five state employees, randomly selected from a broader district-level pool of state employees, are randomly assigned to staff each polling station. These officers each perform different administrative responsibilities to verify a voter’s identity at the station before allowing them to vote, and to maintain a neutral electoral environment around the polling station. Polling station officers have sufficient discretion in the voter identification verification process to affect voters’ choices, keep qualified voters from voting, or let unqualified voters cast a vote. However, they have less discretion over determining the eligibility of voters with a government-issued voter identity card—the officially preferred and less controversial form of identification. Registered voters are only able to vote at a specific pre-assigned polling station.

Researchers compared polling stations with a “diverse” team of officers – consisting of a team with at least one Muslim or Yadav officer-with polling stations with a “homogenous” team with only non-Muslim, non-Yadav officers. To measure the impact of the election officer team composition on election outcomes, researchers collected data on officer assignments and party vote shares from the election.

Researchers complemented this data with additional survey experiments carried out between May and September 2015 with 860 officers and 4,243 voters. These survey experiments explored potential channels through which election officer teams could influence election outcomes. First, polling station officials were asked to estimate the likelihood of a hypothetical individual being allowed to vote. Researchers randomly changed the individual’s name to correspond to different religious and caste identities, allowing them to estimate officials’ bias against certain identities. Second, voters were asked if they were treated differently by election officers based on their religion or caste, or if they saw election officers try to influence voting activity at their polling stations. As these are potentially sensitive questions to include in surveys, researchers randomly gave some voters a survey that contained these sensitive questions, with other voters receiving the same survey without the sensitive questions. By comparing the number of positive answers in both voter survey groups, researchers could estimate whether biased behavior had occurred on election day.

The identity of polling station officers significantly impacted voting outcomes: more diverse officer teams increased the vote share for the minority-oriented coalition. The effects were concentrated in areas where fewer individuals possessed voter identity cards, where officials had more discretion in the voter identification verification process. The results suggest that the effects were driven by identity-based bias in the decision-making of election officials.

Voting outcomes: In polling stations with a “diverse” officer team, votes for the minority-oriented coalition (the RJD) increased by 4.9 percent, while votes for the opposing coalition (BJP) decreased by 4.2 percent. This translated to a 2.5 percentage point, or 13.8 percent, average increase in the RJD’s vote share margin. In addition, these effects spilled over to nearby polling stations: having a “diverse” officer team in a station in the same building or compound further increased the RJD’s vote share across stations by an average of 2.7 percentage points (a 19 percent increase in the RJD’s vote share margin in the absence of diverse officer stations). The effects of election officer team diversity on voting outcomes are concentrated in areas where fewer individuals possess identity cards, where officers had wider discretion over determining each voter’s eligibility.

Polling station officer bias: Based on data from their survey experiments, researchers found suggestive evidence that polling station officials were biased in their behavior towards potential voters. Officials were 10 percentage points, or 25 percent, more likely to consider a hypothetical individual eligible to vote if they shared the same religious or caste background. In addition, approximately 23 percent of potential voters perceived that officers treated individuals differently based on religion or caste on election day, and 14 percent said that officers attempted to influence voter behavior. Non-minority voters were also more likely to indicate they were able to vote and had a more satisfactory experience in homogenous polling stations than minority voters, though these differences disappeared when both minorities and non-minorities possessed voter identity cards.

Overall, these results suggest that diversity within teams of election officials can improve the impartiality of polling station management and boost the electoral performance of minority-oriented parties. These electoral gains can be significant—researchers estimated that having at least one minority officer in each polling station team would have changed the identity of the winning coalition in around 7 percent of races across the 2010, 2014, and 2015 elections in Bihar. Furthermore, diverse polling stations would have led to a roughly 12 percent increase in Muslim legislators following these elections. However political or administrative factors might undermine the feasibility of mandating diverse teams of election officials. Other policies which reduce officials’ scope for discretion, such as widespread voter identity cards, may be promising alternatives to reduce the ability of local-level election officials to influence voting outcomes.