Over the past decade many developing countries have expanded primary school access, energized by initiatives such as the United Nations Millennium Development Goals, which call for achieving universal primary education by 2015. However, these improvements in school access have not been accompanied by improvements in school quality. Poor learning outcomes may be due, in part, to high absence rates among teachers, who often lack strong incentives to attend work. There have been relatively few rigorous studies that have evaluated successful interventions to address absenteeism, so little is known about how reduced absenteeism impacts other educational outcomes. If teachers are incentivized to show up to school, is that all they do, or once there do they teach? Do simple financial incentives undermine their motivation to teach well?

Despite booming economic growth and an improved educational infrastructure in many regions in India, primary education is lagging in many remote and marginalized communities. Sixty-five percent of surveyed children enrolled in grades 2 through 5 in government primary schools could not read a simple paragraph, and 50 percent could not do simple subtraction. Teacher absenteeism, a pervasive problem in these schools, may contribute to these poor educational outcomes. Disciplinary actions are rarely undertaken against absent teachers: in a survey of 3,000 Indian government schools, only one principal reported a teacher having been fired for poor attendance . This may account for the extremely high rate of teacher absence in India: in schools examined by this study, teachers attended classes about 65 percent of the time. 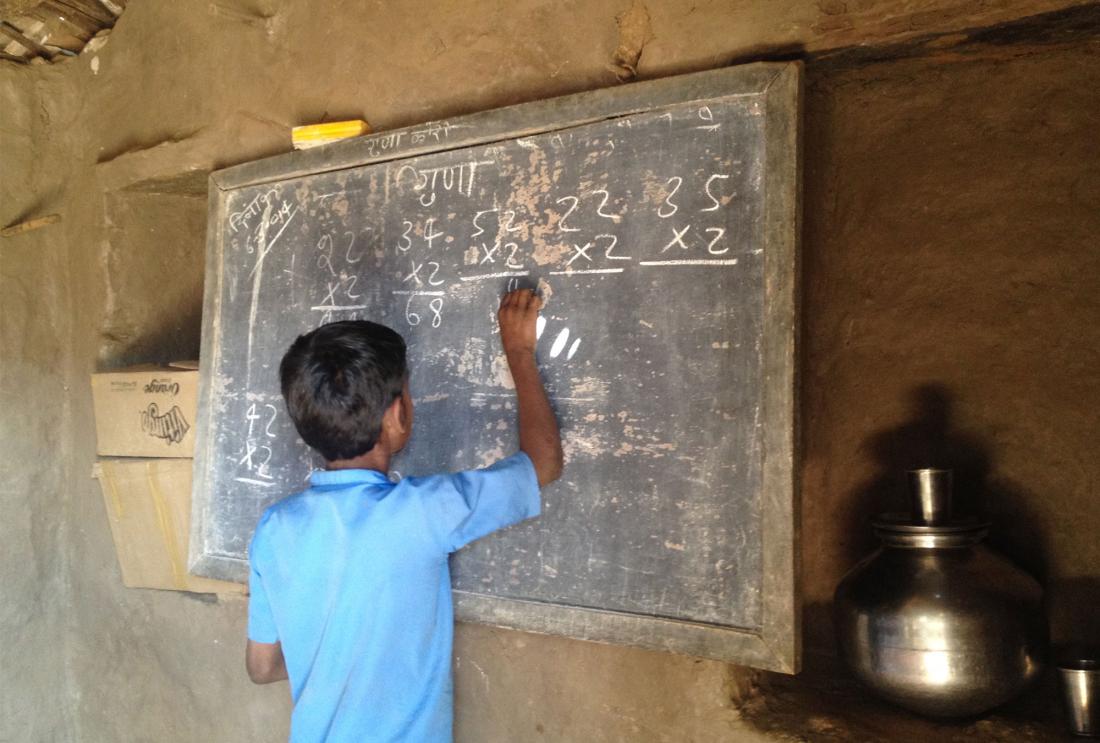 In rural Udaipur in India, Seva Mandir, an Indian NGO, runs informal schools to help students not reached by ordinary government schools. Each school has only one teacher who instructs about 20 students in basic Hindi and math. Similar to other schools around the world, teacher absenteeism was high: the teacher absence rate was 44 percent.

Because these were NGO schools and teachers, it was an ideal setting to test how teachers responded to incentives: would the incentives be effective, or would teachers find a way around the system? Unlike government schools, Seva Mandir had enough freedom and control over its own schools to experiment with a straightforward method for motivating teachers.

Each teacher in the program was given a camera with a tamperproof date and time stamp and was instructed to take a picture with students at the beginning and end of each school day. Teachers were paid for the number of days that they attended as recorded by the cameras, giving them a clear incentive to attend school. To test the effectiveness of the program, Seva Mandir randomly assigned half of the teachers to the camera program, while the rest were supervised and paid the normal way as a control group. Unannounced, random checks measured the true attendance of each group.

The camera program did not require a large change in school regulations or institutions. Instead, it provided a way to enforce existing rules.

Objective monitoring linked to clear, credible incentives motivated attendance: The camera-mediated incentives improved teacher attendance. Attendance increased from 58 percent in the control group to 79 percent in the group with cameras. Overall, this translates into 34 more days of instruction per student per year. Attendance increased for teachers with both relatively high and low attendance records. In the camera group, 36 percent of the teachers were present at least 90 percent of school days; in the control group, only one teacher was.

Higher teacher attendance means higher test scores for students: When teachers came to school more, students learned more. Students in camera schools had higher test scores by 0.17 standard deviations and were 62 percent more likely to be admitted to regular government schools. Seven percent more girls were able to take a test that required being able to write. This study also speaks to the debate on informal schools. Many say such schools are ineffective because teachers tend to be less skilled than government teachers. However, this program shows that under the right conditions informal schools can improve education for the rural poor.

The program was a cost-effective way to increase student learning: The camera program was not designed to be a scalable intervention, but rather to test the impact of motivating teacher attendance, particularly for student learning. Because the incentive pay proved equal on average to the salary teachers would otherwise be paid, the only cost of the program was for cameras and monitoring. Surprisingly, the program was so successful that it became a cost-effective way of promoting learning. The program cost INR 5,379 (about US$120) per teacher per year, about 40 percent of a teacher’s yearly salary. Of this, about US$25 was for the camera; US$85 was for film, batteries, and photo development; and US$10 was for labor costs to run the program. Each additional day of teacher presence cost US$2.20. This translates into US$0.11 per extra day of school per child. A larger program with more economy of scale or digital cameras might be even less expensive.

Rampant absenteeism of teachers and health care workers around the world is not going to be solved by cameras. This study was not designed to test a replicable program, but to understand the effect of monitoring.

Objective monitoring with incentives worked. Given credible incentives to attend school, teachers improved their attendance. Once at school, teachers in camera schools were just as likely as regularly salaried teachers to actually be teaching, so monitoring caused teaching time to go up. Incentives did not undermine teachers’ motivation: students learned more, scored higher on tests, and were more likely to graduate.

The camera program’s objective monitoring linked directly to incentives caused it to succeed where other programs designed to motivate teacher attendance failed. Neither teachers nor their supervisors could hide performance, excuse absences, or distort incentives. The result gave teachers control of their incomes and gave students a better education.

8 result(s)
Implementation ups and downs: Monitoring attendance to improve public services for the poor in India
Fixing educational policy's failure
Inside the Machine: Towards a New Development Economics
Camera and Cash Pill for Truant Tutors
Computer Error?
Measuring the Effectiveness of Foreign Aid
Trial and Error
Camera Schools: The Way to Go