The Impact of Early Childhood Education on Child Development in Karnataka, India

Early childhood is a critical time for cognitive, social, and physical development. Unfortunately, in developing countries, many children under five fail to reach their developmental potential. Researchers partnered with Hippocampus Learning Centers (HLC), an organization that aims to provide affordable and high-quality pre-primary education in rural Karnataka, India, to test the impact of attending kindergarten on children’s cognitive and socioemotional development. The scholarships program positively impacted enrollment in kindergarten and children’s performance on cognitive tests, with some effects persisting through the first year of primary school. However, the scholarships did not have an effect on socioemotional development.

Early childhood is a critical time for cognitive, social, and physical development. For children under the age of five, cognitive and psychosocial stimulation may be especially important for psychological and neurological growth. Research from the United States, where Early Childhood Education (ECE) options such as public preschools and kindergartens are commonplace, suggests that ECE can help children gain skills necessary for educational success later in life.1 Unfortunately, most evidence on the impacts of pre-primary schooling is from high-income countries, and experimental research on the impact of ECE in low- or middle-income contexts is relatively nascent. To address this evidence gap, researchers evaluated the impact of scholarships to attend kindergarten on child development in rural Karnataka, India.

In rural India, enrollment in formal pre-primary schooling was quite limited at the time of the evaluation, with just 14 percent of preschool-aged children enrolled as of 2017. In many villages, government-run anganwadi centers provide some ECE, but largely serve as daycares staffed by individuals minimally trained in teaching. However, the government’s role in ECE is set to expand—India’s National Education Policy 2020, passed in July 2020, now includes preschool for children ages 3-6 in the education system structure.

Private preschools and kindergartens are another ECE option, but these often charge high fees and feature a curriculum based in rote learning. Additionally, parents may not believe that ECE is important for their child’s development. Among the households in this study, parents tended to believe in the importance of rote learning, which could imply a lack of awareness of the importance of stimulating their children to encourage emotional and intellectual development.

Researchers partnered with Hippocampus Learning Centers (HLC), an organization that aims to provide affordable and high-quality pre-primary education for 3-6 year old children in rural Karnataka, India. HLC runs village “learning centers” which offer a year of prekindergarten and two years of kindergarten for US$70 to $107 per year.2 The HLC model is unique because its curriculum has detailed, daily lesson plans and necessary materials in a ready-made kit that make it easy for teachers in rural areas to deliver quality lessons. New teachers are provided twenty days of intensive training and monthly in-service training throughout the year. The structured curriculum allows the HLC model to be easily scaled as the organization grows. 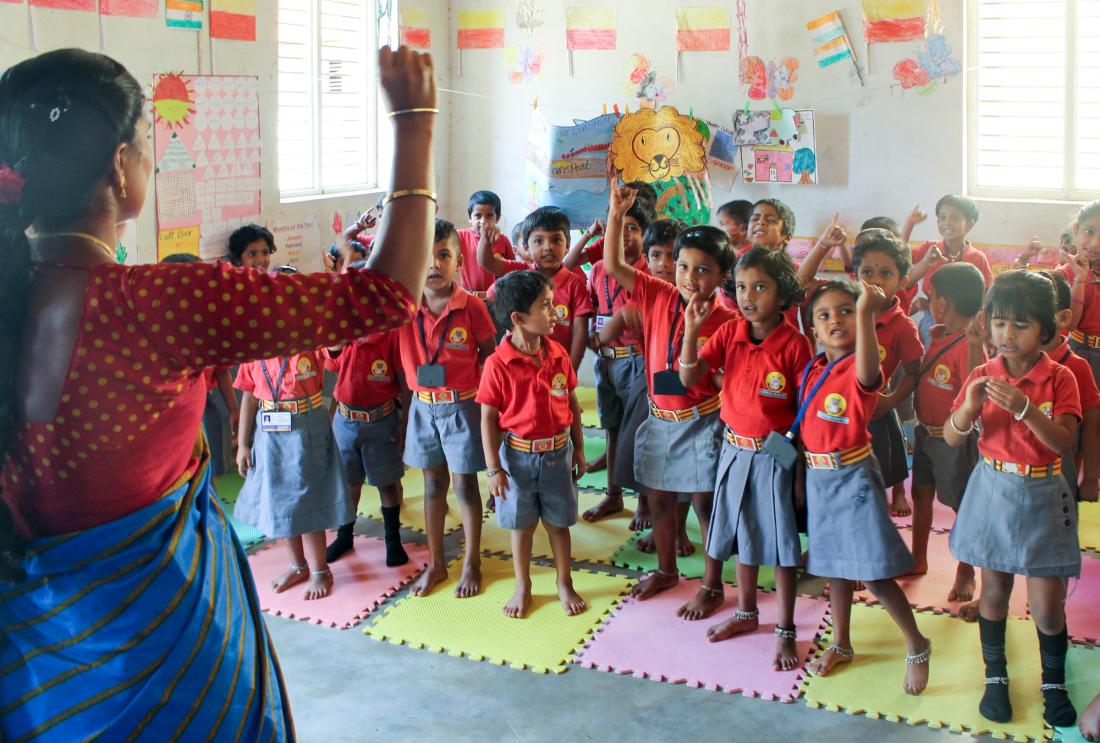 In partnership with HLC, researchers conducted a randomized evaluation in 71 villages in Karnataka to test the impact of attending two years of kindergarten at HLC on children’s cognitive and socioemotional development as well as their learning outcomes in the first year of primary school.

To encourage children to attend HLC, researchers created a scholarship program for children who were age-appropriate to enroll in the first year of kindergarten (aged 3.5-4.5) from the poorest households in their villages, determined through household surveys. The scholarship was worth 80-87 percent of the total cost to attend two years of kindergarten, accounting for material fees and kindergarten level (junior or senior) at an HLC school, or about INR 4,125-6,825 (US$59-98 in 2016). Scholarship families were responsible for an INR 1,000 co-pay (US$15 in 2016) per year.

Researchers gathered data on children’s development at three points in time. After a baseline cognitive test prior to starting kindergarten, children were assessed on their cognitive and socioemotional development after completing kindergarten and again after completing first grade. The first assessment of socioemotional development was made by surveying parents on their impressions of their children’s development, while the second, more direct, assessment was made via a series of games.

Cognitive development: Offering children a scholarship, and in particular attending HLC on a scholarship, had a large positive effect on cognitive development.  Immediately after kindergarten, those induced into attending formal kindergarten have roughly doubled the rate of learning compared to the peers who did not attend kindergarten. After two years of attending HLC kindergarten, children who were offered a scholarship scored on average 0.4 standard deviations higher on cognitive tests covering subjects including math, language, memory, motor skills, reasoning, and creativity than students who were not offered a scholarship. Students who were offered the scholarship and attended HLC as a result (68 percent of students offered the scholarship) scored on average 0.8 standard deviations better than children who did not attend HLC on the cognitive tests. About 40 percent of this effect was found to persist through the first year of primary school.

Socioemotional development: The HLC program did not have an effect on any of the measured aspects of socioemotional development, either in the short- or medium-run. The direct assessment conducted at the end of first grade found no effect on children's contentiousness, willingness to attempt hard problems, their willingness to share with another child, or other measures. One explanation may be that socioemotional skills seem to arise when children interact with one another in a structured environment, and because most children in the comparison group attended public day care centers, the social environments of the scholarship and comparison groups may have been similar.

These results suggest that there can be substantial cognitive benefits to participation in ECE with a more formal curriculum. However, a more formal ECE curriculum does not appear to yield additional socioemotional gains beyond community day care.