Urban armed groups, especially criminal gangs, are a growing threat to peace and economic growth in cities across the world. These groups often exert state-like powers, enforcing contracts, policing, and taxing businesses in the areas they informally govern. The conventional wisdom suggests that criminal organizations provide governance when states do not, and that increasing state services could crowd gangs out. In partnership with the City of Medellín, researchers randomly introduced a program that intensified government outreach to gang-controlled neighborhoods. The study found no evidence that the city’s intervention reduced gang rule.

Urban armed groups, especially criminal gangs, pose a growing threat to peace and economic growth in cities across the world. Gangs, mafias, and urban militias have turned large portions of many cities into violent hot spots where government officials and police forces do not go. In certain neighborhoods in Latin America and elsewhere, criminal organizations also act as local governing bodies, exerting state-like control over populations that are underserved by the government.

Despite the prevalence of such “criminal governance” in cities around the world, there is very little information available to policymakers about effective strategies to reduce the influence of urban armed groups. Can the state begin to provide everyday governance in place of these unofficial groups, and thereby increase its own legitimacy?

After five decades of civil war and drug trafficking conflicts, Colombia has made significant improvements in security across the country. However, urban gangs remain a threat to state authority in poor and historically underserved areas. In Medellín, Colombia’s second largest city, gangs established their power and control in response to a historic lack of government presence and services, as well as the city’s geographic significance to drug trade routes.

In Medellín’s urban core, the state is relatively strong and well-organized, and the city government provides a variety of public services to all corners of the city. However, in certain areas of the city’s peripheries, state presence is weak and combos are strong. 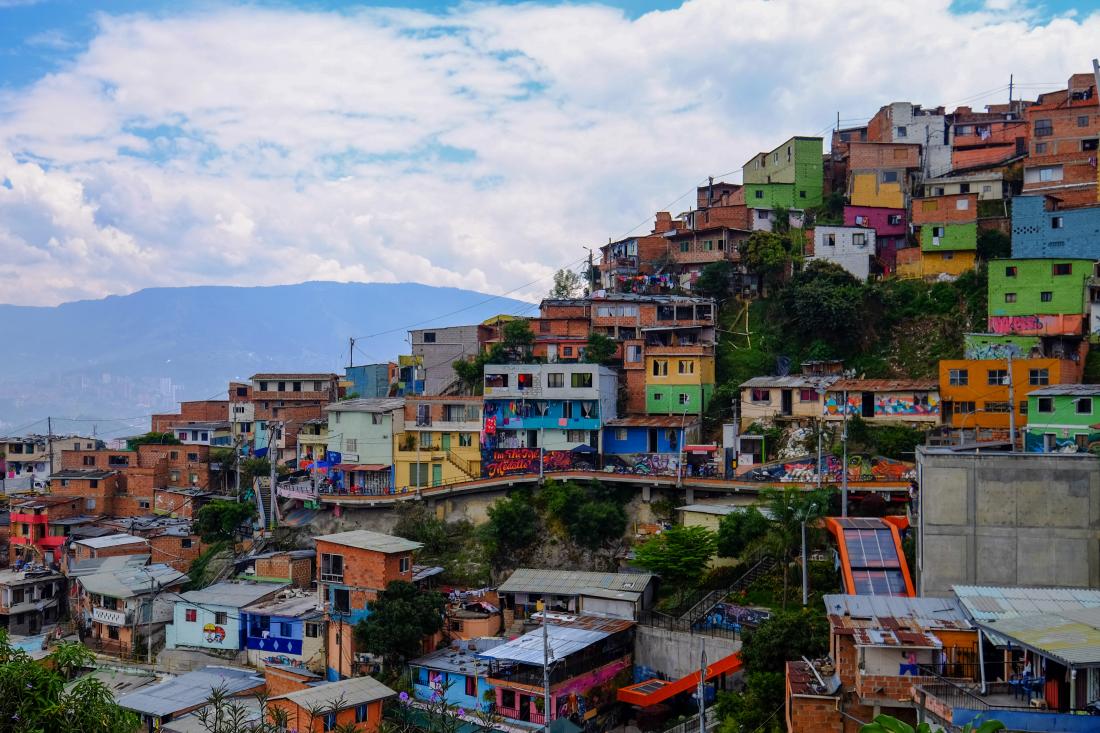 In partnership with the City of Medellín and community officials, researchers randomly introduced an intervention to increase state presence and improve access to government services in gang-controlled neighborhoods to test the impact of increased municipal governance on the roles and legitimacy of local gangs and the state. The intervention was designed after two years of intensive study of combos through hundreds of interviews with community members and leaders, experts, police, combo members, and other criminal leaders.

Medellín is divided into 16 large urban administrative units called comunas and 5 rural administrative units called corregimientos. Each comuna is further divided into official neighborhoods. Prior to the intervention, the city identified 80 sectors where governance by combos was high. A sector is an informal territorial area, significantly smaller than an official neighborhood, usually with about 1,000–3,000 residents. Researchers randomly assigned forty of these sectors to receive the intervention. The other forty sectors received the normal amount of outreach and services offered by the government and served as the comparison group.

In each sector assigned to the intervention, the city government placed a “liaison” who was responsible for advocating for and coordinating government service delivery. Liaisons’ roles included (1) routine problem-solving and dispute resolution, (2) coordinating and intensifying delivery of existing city services, such as social welfare or maintenance services, and (3) improving community organizations' ability to obtain public resources. Under the status quo, the city government assigns one liaison per 120,000 people. In sectors assigned to the intervention, the ratio dropped to one liaison per 2,000 people. The city government also intensified its regular strategies to govern and deliver public services. A multi-disciplinary team within the city’s Secretariat of Security worked with other city agencies to deliver tailored services to sectors as requested by liaisons.

The study found that the city’s intervention did not reduce gang rule. Even in the neighborhoods where the intervention worked best, a large increase in street-level governance services failed to reduce criminal supply of similar services.

Researchers found that, on average, the state is the predominant provider of governance for residents. However, the combo is seldom far behind and, in dozens of neighborhoods, it is the leading provider. Through complementary qualitative interviews with combo members and leaders, the team found that gangs consider neighborhood protection as part of their business lines, and dedicate resources accordingly.  However, it is not the profits from neighborhood protection that appears to drive this, but rather the gangs’ need in large part to protect themselves from state repression. Specifically, providing order and protection fosters citizen loyalty and, in turn, reduces the chances that residents will inform authorities of the combo’s activities.

Accompanying quasi-experimental evidence also suggests that combos rule more when the state does so: it appears that state presence provokes a strategic response by gangs to protect their interests in that area. This dynamic reflects a defining characteristic of criminal governance: whereas conventional wisdom suggests that crime flourishes where the state is weak, instead criminal governance is almost always embedded within and subject to state power.

By identifying many of the drivers that prompt gangs to provide governance in the first place, the study offers the following policy lessons for future programming:

Factors driving gang rule: Qualitative evidence from researchers’ in-depth interviews suggests that gangs do not appear to be solely motivated by profits accrued through providing protection to the local community (collected via fees or “taxes”). Rather, providing this service facilitates the continuity of gangs’ other business lines, particularly retail drug sales. Gang leaders’ desire for status and community respect could also be motivating factors for providing order. Gang abuses, including purely extractive extortion, appear to be driven primarily by their need for community loyalty, collaboration, and respect. This suggests that civilian perceptions and attitudes can be a powerful tool for gang regulation.

Redefining the basis of states’ responses: The conventional wisdom suggests that criminal rule provides protection when states do not, and that increasing state services could crowd gangs out. However, our results suggest that gangs rule in large part to protect themselves from state repression and thus, it may be very difficult for governments to reduce gang rule simply by governing more and better. Even in neighborhoods where the city did intensify actual governance, the average citizen was not immediately aware, suggesting it takes time to build relationships, raise awareness of state presence, and foster the government’s legitimacy. In addition, the findings suggest that other common policy interventions, such as police crackdowns, improving ease of anonymous reporting, or coordinating neighborhood merchants to resist extortion (i.e. collective action) could fail in the presence of gang rule. Such interventions ignore the indirect payoffs to governing and the fact that gangs often have an incentive to rule even if they are unable to collect extortion fees.

Besides prosecuting criminal leaders and governing better, the researchers suggest that states need to tackle gang revenues to plausibly reduce the success of organized crime. For instance, lower profitability of drug markets could reduce optimal gang size as well as incentives to govern. So long as there is high consumer demand for illicit drugs and loans, crackdowns and displacement may not undermine the gang’s main motives for existence and ruling.