Local authorities that provide public goods and services to the rural poor are often not democratic and accountable and community driven development (CDD) is often employed as a means to promote democratic and accountable institutions at the local level. Researchers studied the impact of a community driven development program in Sierra Leone in the short and long-run and contrasted it with a technocratic approach to delegate the management of development projects to high skill individuals. In the short term, the CDD program increased the stock of higher quality local public goods, but did not lead to fundamental changes in local institutions or decision-making in the shorter term. The technocratic selection intervention improved local project management relative to the traditional status quo and the long-term institutional reform through the CDD intervention.

Local authorities that are responsible for providing public goods and services to the rural poor and driving local development are often criticized for not being democratic and accountable. Additionally, they tend to be far less educated than younger community members, due to recent investments in education in low-income countries. On the other hand, good institutions that impose checks and balances, allocate political power more equitably, and protect property rights may promote long-run economic growth. One of the most popular strategies employed by donors to promote democratic and accountable institutions at the local level is "community driven development," or CDD. Typical CDD interventions combine block grants that communities can spend on local projects with requirements that decisions must be made in an inclusive and transparent manner, and include training on how to do this. The participation requirements aim to ensure that the projects funded reflect the needs of the community and minority groups that may not have a voice in decision-making.

Human capital, or the skills and capacities of individuals in communities can also be leveraged to promote economic growth and might even be a more important driver of growth than institutions. Thus, identifying high-skilled individuals in a community to manage development projects can help improve the implementation of these projects.

Sierra Leone lags behind most countries in terms of government effectiveness and economic development. For example, Sierra Leone is in the tenth percentile of government effectiveness according to the World Bank (where 0 indicates the lowest rank in government effectiveness and 100 indicates the highest) and ranks 179th out of 188 in the United Nations Human Development Index.  Traditional chiefs make decisions related to public goods provision, land distribution and local justice decisions and are not often subject to institutional checks and balances. Recent investments in Sierra Leone have led to major improvements in education, such as the achievement of universal primary enrollment in schools. These improvements have opened up the possibility of leveraging existing human capital and skill to respond effectively to the challenges of local development.

In 2016, the local elected governments in the study districts ran a competition to award grants for small-scale infrastructure construction. A committee of elected local councilors evaluated the proposals and awarded implementation grants to the top twenty proposals. The grant, worth US$2,500 was sufficient to fund meaningful projects such as the construction of a community center, grain storage house or multiple latrines. Researchers used this program to contrast the effects of different interventions with the traditional status quo. 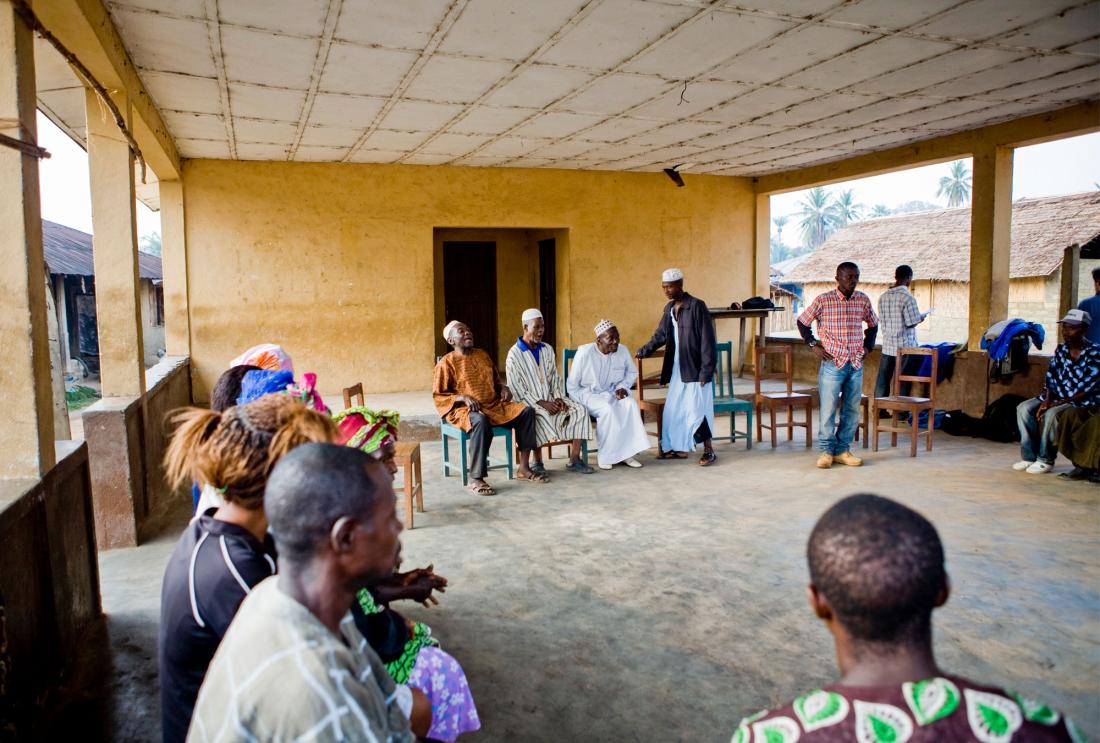 Researchers evaluated the impact of two separate interventions by providing them to a randomly selected subset of villages from a set of 236 villages in the Bombali and Bonthe districts. The first was a community driven development project (known as the “GoBifo” program) that ran from 2005 to 2010. The second was an intervention to delegate managerial responsibilities of development projects to high-skilled individuals, which was conducted several years after the CDD project was implemented.

Researchers chose high skilled individuals based on community input and a standardized test to measure basic literacy, past experience, etc. All communities were asked to nominate potential technocrats during a community meeting, who then took the standardized test. The highest scorer in this test was named the local technocrat.

Next, researchers randomized all 236 programs and comparison villages from the GoBifo program into three groups. In the first program group, local leaders were nudged to put the local technocrat in charge of managing the proposal. In the second program group, a management training was provided to the local technocrats alongside the nudge. The third group received no intervention and served as the comparison group.

Researchers collected data in 2009, shortly after the first intensive phase of GoBifo activities had ended, to capture any impacts on the stock and quality of public goods, as well as measures of institutional change and collective action. Researchers collected data from the original 236 villages in the treatment and comparison groups in 2017, to assess long-term impacts on institutional changes.

Researchers also collected information on the prior beliefs of academics and policy experts in Sierra Leone and OECD countries on the long-run effects of CDD, by asking them to predict the magnitude of treatment effects.

Finally, researchers measured the quality of proposals submitted in the 2016 government grant program through review by different sets of local development professionals. They used the quality of proposals to compare the long-term impact of the CDD program with the technocratic selection intervention, and contrast these with the status quo of the traditional chiefs’ authority.

Overall, in the short term, the CDD program increased the stock of higher quality local public goods, but did not lead to fundamental changes in local institutions or decision-making. The technocratic selection intervention improved local project management relative to the traditional status quo and the long-term institutional reform through the CDD intervention.

Short-run impacts of CDD: In data collected in 2009, shortly after the intense first phase of project activity concluded, research found evidence for substantial positive effects of the GoBifo program on the stock and quality of local public goods, but no evidence of impacts on measures of institutional change and collective action  In the short-run, GoBifo villages had a larger stock of higher quality local public goods, such as a functioning primary school or community grain-drying floor, than comparison areas which did not receive the GoBifo intervention. There was also more market activity in treatment communities, including the presence of more traders and items for sale, suggesting short-run economic gains. However, the program did not lead to fundamental changes in local institutions or decision-making in the shorter term. Despite the fact that many women in treatment villages attended GoBifo meetings, they were no more likely to voice an opinion in community meetings after the project ended or to play a leadership role in other areas.

Long-run impacts of CDD:  Exposure to several years of the CDD program, on the other hand, did not lead to improvements in proposal quality. Researchers found that the CDD intervention didn't change how communities were actually governed. For example, chiefs in CDD communities did not take additional measures to identify high-skilled individuals. The individuals nominated to be the local technocrat through deliberation in community meetings were no different, on average, in CDD groups and the comparison group, in terms of test performance and other characteristics, like gender and age. When it came to actual delegation of project management, chiefs in CDD communities were slightly more likely than the comparison group to delegate project management to high skill individuals. However, the same effect was greater in the technocratic treatment group.  These findings indicate that technocratic selection may be a more viable and affordable strategy to attract high human capital individuals to local development projects than attempts to affect institutional transformation in Sierra Leone.

Prior beliefs of experts: Based on the data collected on the priors of policy experts and researchers in Sierra Leone and OECD countries, researchers found that policy experts in Sierra Leone greatly overestimated the potential for long-run institutional change, while OECD policymakers were roughly on target on average. Meanwhile, economics and political science faculty were more pessimistic on average, with a substantial number predicting precisely zero long-run effects.

Thus, the results from this study indicate that there is substantial scope to attract individuals with high skills and human capital into local development projects to achieve positive public outcomes.

4 result(s)
How to Tap Skilled Managers in Villages Where Chiefs Still Rule
How Should War-Torn Countries Go About the Reconciliation Process?
Don't mention the war! Talking about conflict heals society but leads to depression among the individuals involved
It’s been 25 years since Sierra Leone’s brutal civil war. Here’s what we know about helping communities recover.