Although there is growing interest in improving the quality of pre-school education in low- and middle-income countries, there is little evidence on cost-effective ways of doing so at scale. Researchers introduced an additional education-focused worker in early childhood development centers in India in order to evaluate the impact of increased staff capacity on students’ learning and health outcomes. The program increased time spent on pre-school instruction and improved scores on independent tests of math, language, and executive function while also lowering stunting and severe malnutrition. The researchers also estimated that the potential benefits of the program significantly exceed its costs, even under conservative assumptions.

A large body of evidence has established the central role of early childhood health and education in fostering lifetime well-being and economic success.1 Despite growing policy interest, little evidence exists on cost-effective ways of improving the quality of early-childhood education programs in low- and middle-income countries at scale. In these countries, access to public pre-school systems has improved, but it has not been accompanied by substantial improvements in student learning or attendance. Second, the child-nutrition literature has shown that interventions can help improve child nutrition up to the age of two. However, there is still a limited understanding of whether interventions can reduce stunting between the ages of three to five. To fill these evidence gaps, researchers tested the impact of adding an extra worker focused on pre-school education, on the learning and health outcomes of children under the age of five in India.

India has the largest number of children under the age of six in the world—over 160 million.2 Data from a national survey in 2015-16 suggests that 33 percent of Indian children are under-nourished.3 Put together, India has the world’s largest number of malnourished children, which significantly increases their risk of not reaching their development potential. Additionally, Indian children display low levels of learning starting as early as primary school. Learning outcomes are worse for children who attend public schools with only 19 percent of public school first graders being able to read words as compared to 42 percent of private school first graders.4

The Integrated Child Development Services (ICDS) is the program primarily responsible for early childhood development in India. ICDS provides health and nutrition services as well as pre-school education via a network of Anganwadi centers. It is the largest early childhood care program in the world, reaching tens of millions of socio-economically disadvantaged children between the ages zero to six, who are likely to benefit the most from early childhood education and nutrition programs. All Anganwadi centers are staffed with one worker who is responsible for managing all services provided at the center, and one helper who helps to maintain the center and prepare food. While the Anganwadi worker is expected to have at least a secondary school education, the helper is not required to have formal education beyond basic literacy.

This study was conducted in the state of Tamil Nadu, which is home to 4.2 million children between the ages of three to six.5 Despite the state being ranked high nationally in terms of human development, 27 percent of the children in Tamil Nadu are stunted and 24 percent are undernourished.6 Furthermore, an initial diagnostic check on time-use revealed that, on average, Anganwadi workers in Tamil Nadu spent only 38 minutes per day on pre-school instruction out of a scheduled two hours. 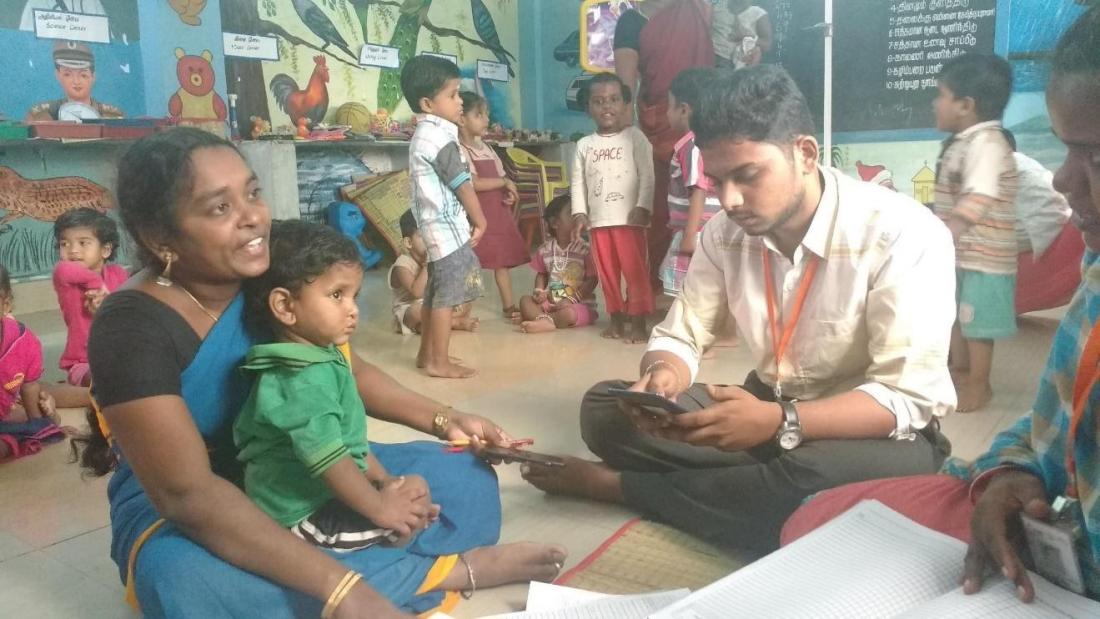 This study was conducted as part of an ongoing research partnership with the Government of Tamil Nadu and its primary objective was to identify cost-effective, scalable ways to improve outcomes of the ICDS. A total of 320 Anganwadi centers were randomly sampled across four districts (Kancheepuram, Karur, Tiruchirapalli and Virudhunagar), representative of the state of Tamil Nadu, excluding the metropolis of Chennai. Researchers randomly assigned half of these centers to a comparison group and the other half to an intervention group. The program Anganwadi centers were given the opportunity to hire an extra early childhood education (ECE) facilitator to focus on pre-school instructional tasks. These Anganwadi centers hired facilitators on two-year contracts using a similar set of eligibility criteria to those used for Anganwadi workers, though the minimum age was reduced from 25 years to 18 years.

Facilitators were expected to work half the hours of an Anganwadi worker, and were correspondingly paid around half the salary (INR 4000 per month compared to INR 8000 per month that is USD$60 per month against USD$120 per month). The Government of Tamil Nadu, in collaboration with UNICEF, developed the instructional content of the curriculum, which was designed to adhere to global guidelines on early-childhood development while preserving local context. ECE facilitators received manuals, and one week training on delivering the curriculum. A baseline survey was conducted between September to November 2016 prior to randomization and a follow-up survey was conducted eighteen months later. The primary outcomes studied were children’s scores on independent tests of math, language, and executive function skills, as well as measures of nutrition.

The addition of an extra worker focused on early childhood education doubled the total instructional time and led to an increase in math and language test scores after eighteen months. Further, the intervention also lowered rates of stunting and severe malnutrition in the intervention group. The researchers also conservatively estimate that the increase in the value of the participants’ future earnings, adjusted for inflation, would be much greater than the cost of the program.

Anganwadi worker attendance and punctuality: Almost all centers that were given the option to hire an ECE facilitator chose to do so. The addition of the ECE facilitator reduced the likelihood of centers being closed at the scheduled start of pre-school instruction (10 a.m.). Based on unannounced visits, program centers were closed only 3.8 percent of the time as compared to 12.5 percent in comparison centers. Additionally, the absence of Anganwadi workers in program centers was lower by 50 percent from a base of 20 percent.

Total instructional time: The intervention led to a large increase in total time spent on early childhood education when considering the combined time spent by the ECE facilitator and the Anganwadi worker. Children in program received 76 minutes per day of pre-school instruction as compared to 38 minutes in the comparison group, effectively doubling the time allotted to education.

Assessing Cost-effectiveness: Researchers conservatively estimate that the present-day value of future earning gains resulting from the program’s educational impacts alone is likely to be around eleven to twelve times the cost. Incorporating nutrition gains would make the benefits 16 to twenty times the cost of the program. Additionally, from a public finance perspective, results show that the cost of the program would be recovered even if the government captured only 6.3 percent of the tax revenue from the future earnings of the children who attend Anganwadi centers. Since this program only requires the hiring of locally- available staff with a secondary education and only a week of training, it is easily scalable and its potential future benefits accruing to the implementer are likely to greatly exceed the costs of the program if implemented at scale.