Youth involved with and exposed to violence will likely have less schooling, which, in the long run, increases the chances of their continued involvement with violence. Generating a safe school environment for children may be an effective way to break this vicious cycle of violence. Researchers partnered with the government of Mato Grosso do Sul to evaluate the impact of a program that deploys police patrolling and direct communication between the police and school administrators in reducing school violence and improving schooling outcomes of students in Brazil.

Evidence indicates that exposure to violence has detrimental long-term impacts on individuals’ physical and mental health. For children who live in unsafe areas, violence and conflict can disrupt their education process through the deterioration of infrastructure, limited access to schools, and higher turnover of teachers, among other potential reasons. In addition, most perpetrators and victims of violence are young people, and a substantial amount of youth related violence takes place close to schools and around school hours. On the other hand, research also shows that schooling can reduce crime.

Together, these factors form what can be described as “the vicious cycle of violence”: youth involved with and exposed to violence will likely have less schooling, which, in the long run, increases the chances of their continued involvement with violence. Therefore, generating a safe school environment for children is fundamental to break this cycle. This is especially important in under-resourced areas of major urban centers, where school aged children are often highly exposed to crime. However, there is little evidence on what types of programs are effective in reducing school violence. What is the role of police action and the traditional public security apparatus in deterring crime in schools and improving schooling outcomes? Is a closer and more continuous involvement of police with schools the most effective way of making students and teachers safe?

This evaluation takes place in Campo Grande, the capital of the state of Mato Grosso do Sul, in the center-west region of Brazil. With a population of 885,711 in 2018, the city is the 15th largest capital in the country.1 Over the past decade, the region has experienced an increase in crime associated with drug trafficking and indirect consequences of gun proliferation such as robberies and homicides. Increased crime rates may be linked with worse outcomes for young people in Campo Grande, as youth are widely involved in gangs and high school dropout rates in the state are higher than the Brazilian average – 7.5 percent against 6.1 percent in 2018.2

The government of Mato Grosso do Sul created a program called “Escola Segura, Família Forte” (Safe School, Strong Family), which aims at reducing crime in the surroundings and interior of public schools. The main objective of the program is to control crime and violence when students and teachers enter and leave the school, reducing stressful situations and threats that can compromise individual safety and the ability of teachers to focus on teaching and student learning. 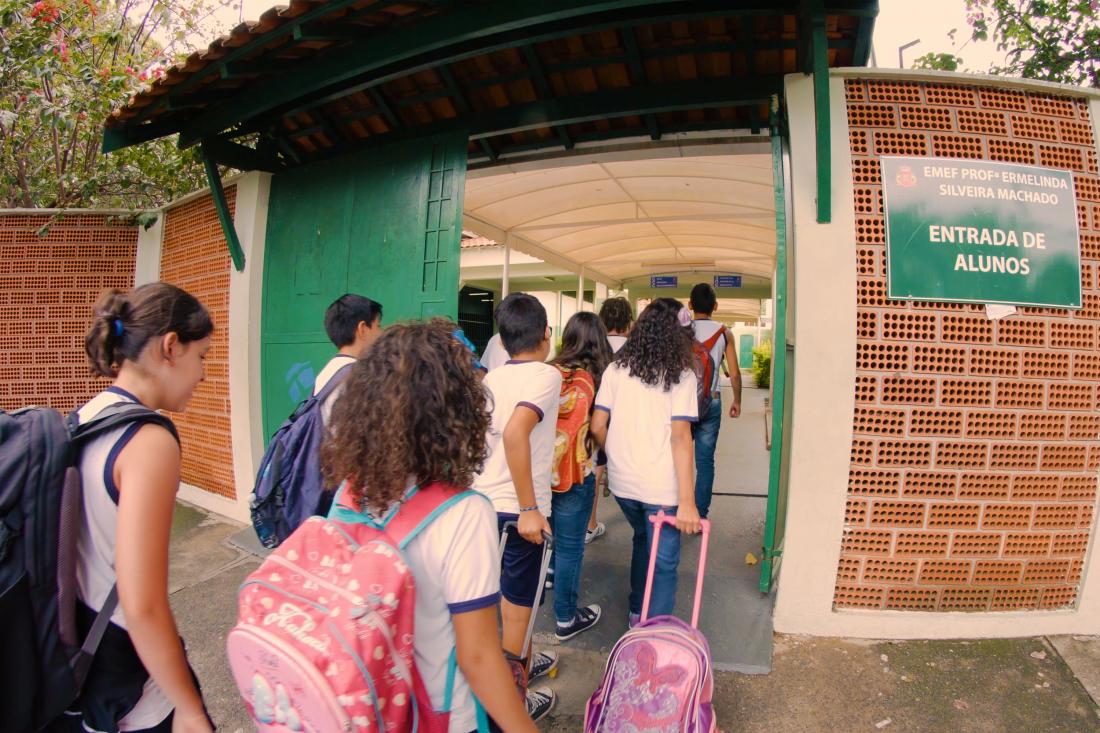 Researchers partnered with the government of Mato Grosso do Sul to evaluate the impact of the program “Escola Segura, Família Forte” in reducing school violence and improving schooling outcomes. To do so, they randomly assigned 160 public schools across 64 neighborhoods in the city of Campo Grande to one of three groups:

The program consists of two components. First, roughly ten teams of two police officers will patrol the schools and their surroundings when students enter and leave schools. They will follow a pre-determined policing routine, which will include parking the car in front of the schools, enter the school to talk to the school principal, interact with students and, in the case of crime, conflict, or violence, intervene to solve it. The police officers will be pre-selected such that they have previous experience interacting with the youth and have the desire to do such a daily activity. They will each have a specially designed car to patrol and access to a tablet and smartphone designed for the program.

Researchers will use administrative data on weekly measures of all reported crimes to assess the impact of the program on violence. Because crime rates are often significantly underreported, they will also conduct surveys with students and teachers. The surveys will also help assess conflict and crime inside the schools, as well as the school community’s trust in the police. Finally, researchers will look at schooling outcomes, such as drop-out rates, pass rates, and test scores, to evaluate the impact of the program on students’ learning.