Source Dispensers and Home Delivery of Chlorine in Kenya

Diarrheal diseases are a leading cause of morbidity and mortality in the developing world, killing an estimated 2.6 million people per year between 1990 and 2000. Children under 5 experience an average of 3.2 diarrheal episodes per year,1 and diarrheal diseases account for 20 percent of deaths in this age group.2 Even when diarrheal episodes are not fatal, they can have long-term impacts on children’s cognitive and physical development. Diarrheal diseases are often transmitted when a water supply is contaminated with fecal matter, and may be endemic in places where the water supply is irregular. Practices from handwashing to water source protection are proven to reduce diarrhea episodes, yet the adoption of such practices has been slow in regions across the developing world.

Despite widespread awareness of the dangers of drinking unsafe water, there is extremely low adoption of sanitation or clean water practices in rural Western Kenya. While three quarters of households have heard of point-of-use water chlorination and 70 percent admit that drinking dirty water causes diarrhea, only 5 percent of households report that their main drinking water supply is chlorinated. The most common method of water chlorination is through the individual purchase of chlorination products, which must be added to water at home. Community level chlorination has been considered as another strategy to increase chlorine take up. Much cheaper than individually packaged bottles, point-of-collection chlorine dispensers can be used at the sources where people collect their water. Here, social pressure may be maximized by making each individual’s sanitation choice publicly known. 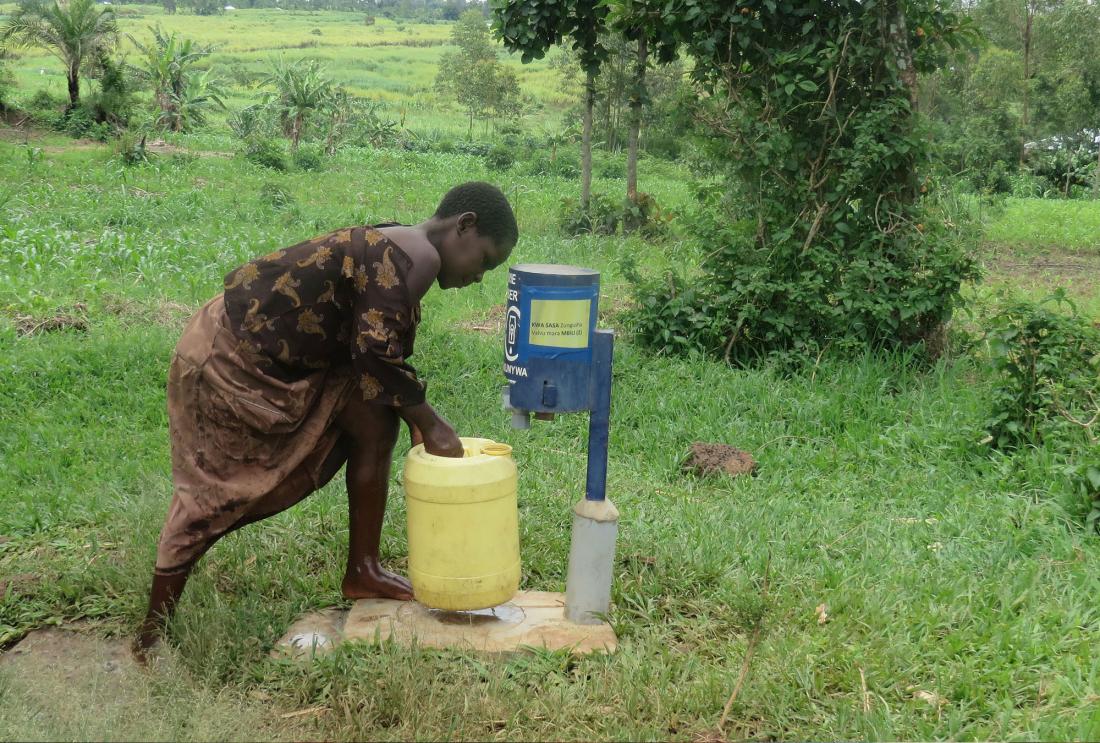 Researchers sought to examine the impact of factors including price, persuasion, promotion, and the chlorination products themselves with a two-phase study. Prior to the study baseline surveys were administered to a random selection of households.

In the first phase, households were given seven WaterGuard bottles, an individual water treatment product, each sufficient for one month’s supply of clean water. They were also provided with improved drinking water storage pots with a tap to prevent contamination and detailed instructions on use. One third of this group received twelve coupons for a 50 percent discount on WaterGuard bottles, each valid for one month during the next year, and calendars with reminders. Another third received additional verbal persuasion messages beyond the basic WaterGuard instructions, and another third received no additional coupons or messages. To estimate social networking effects, the free WaterGuard bottles were distributed in different percentages in each community, allowing researchers to see if higher community levels of use increased individual adoption. A follow-up survey was administered between 2 and 7 months after the free WaterGuard was distributed.

In the second phase researchers compared six different treatments designed to increase WaterGuard adoption. For the first three treatments, scripted promotional messages were delivered at either the (1) household level, (2) community level, or (3) both. The second two treatments included repeated promotion of chlorination through a home visit by a community elected promoter. Despite volunteering to work for free, the promoter was paid either a (4) flat rate, or was (5) paid based on how many households had chlorinated water at follow-up visits. The last treatment (6) combined the incentivized promoter model with an unlimited supply of free WaterGuard delivered through a point-of-collection chlorine dispenser at the local water source. Follow-up surveys were conducted 3 weeks and 3-6 months after the start of the study.

Impact of Free Home Distribution: Most households have a low willingness to pay for chlorine, despite its well known benefits. After receiving a free 7-month supply, chlorine was detected in 58 percent of households, much more than the 2 percent starting level. Still, only 10 percent of the distributed coupons were redeemed. Where WaterGuard bottles were distributed freely, additional persuasive messages had no effect on take up, and in retail markets they only had short-term effects. There appeared to be no “social networking” effects of living in a community with a higher level of chlorination, and no evidence was found that price was an effective screening mechanism to target households who are more likely to benefit from cleaner water.

Impact of Persuasion: Hiring local community members at a low wage to promote chlorine use among their neighbors is highly effective at increasing use. Chlorine was detected in 40 percent of households visited by a promoter, compared to only 4 percent in those who weren’t visited. Incentivizing these promoters had only modest effects. Communities with point-of-collection chlorine dispensers in combination with promoters saw 61percent of households chlorinate their water, up from only 2 percent prior to the study, suggesting that this is a highly cost-effective way to promote take up.

Scale-Up: Investments in marketing campaigns and coupon schemes proved to be ineffective strategies to encourage point-of-use chlorination. Free chlorination dispensed at water sources along with community promoters provided the most effective strategy to improve water cleanliness, potentially preventing diarrheal incidence in areas such as rural Kenya.

Based on this research, more than 27,000 chlorine dispensers have been installed across Kenya, Malawi, and Uganda through the Dispensers for Safe Water Program, providing access to clean water for four million people. For more details, see the evidence to policy case study.

8 result(s)
Nudging grows up (and now has a government job)
Tricking people into being healthy
Evidence-based development: A trend whose time has come?
Peer pressure can be a lifesaver
A surprising barrier to clean water: human nature
For Clean Water, An Approach That Works
Small Changes, Big Results
Water Technologies: What Works Best in Poor Countries