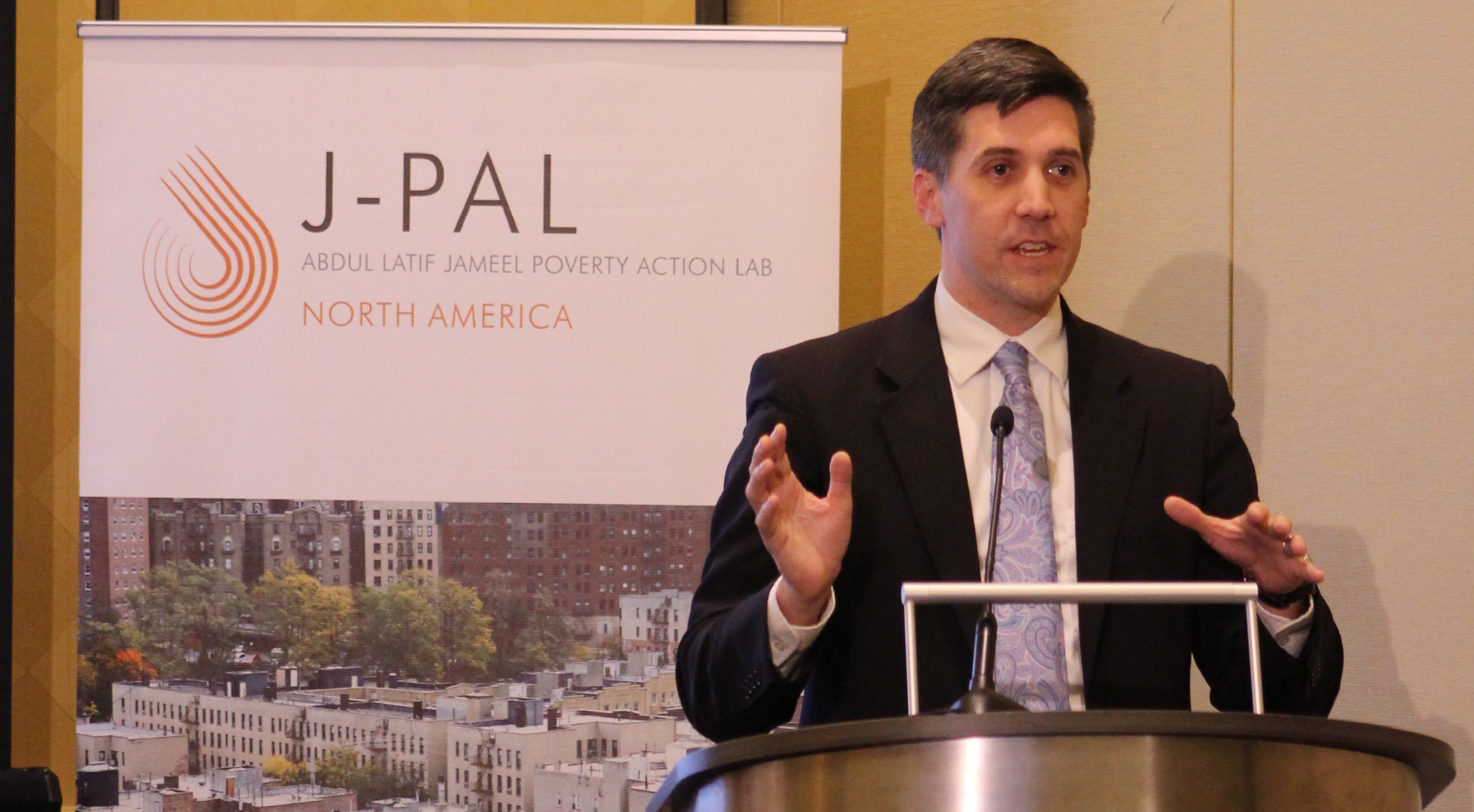 State and local government leaders, leading scholars, and social service providers gathered in Cambridge on January 12th and 13th to share their first-hand experiences creating and using rigorous evidence to address key challenges related to poverty. Participants focused on highlighting examples of how governments and researchers have partnered to use evidence from randomized evaluations to reduce crime and violence, improve maternal and child health, and promote housing mobility.

“Government leaders at all levels are increasingly turning to evidence to inform their policy decisions. Knowing what works best, what doesn’t, and why allows decision makers to implement policies that have a real and lasting impact and can help governments achieve budgetary savings,” said Melissa Kearney (University of Maryland), co-chair of J-PAL North America’s State and Local Innovation Initiative.

J-PAL North America, which hosted the conference, is a regional office of MIT’s Abdul Latif Jameel Poverty Action Lab (J-PAL). J-PAL seeks to reduce poverty by ensuring that policy is informed by scientific evidence. Through the State and Local Innovation Initiative, J-PAL North America supports state and local governments in embedding randomized evaluations into social programs and using the results to inform their priority policy questions. The conference brought together the five governments selected to participate in the first year of the initiative—Philadelphia, Rochester, Pennsylvania, Puerto Rico, and South Carolina—along with other state and local government leaders and their research partners.

Evelyn Diaz (Heartland Alliance) and Sara Heller (University of Pennsylvania) shared their experience generating evidence to prevent crime and violence in Chicago. In response to rising homicide rates in the city, Diaz and Heller collaborated to design and carry out an evaluation of One Summer Chicago Plus, a program providing summer jobs to disadvantaged youth. The program led to a 43 percent decrease in violent crime arrests over 16 months. These results captured both municipal and federal attention, and the program is now on track to quadruple in size. "Just by doing a high-quality study, that also happened to have good results, we were able to make this program available to four times as many young people,” said Diaz. “That never happens in social services." Heller has used these lessons to inform new research, including an ongoing evaluation to test whether assigning participants an adult mentor is needed for the program to work.

A panel on using rigorous evidence to improve health outcomes for mothers and children featured an ongoing evaluation of the Nurse-Family Partnership’s flagship nurse home visiting program for low-income, first-time mothers and babies. Christian Soura (South Carolina Department of Health and Human Services) discussed the practical and political challenges of expanding this program through a pay-for-success contract—an exciting government strategy to fund social programs based on outcomes rather than inputs—and why evaluation is critical to the program’s long-term viability in South Carolina. Katherine Baicker (Harvard T.H. Chan School of Public Health) joined Soura to offer a researcher’s perspective on partnering with government to embed a randomized evaluation into program operations.

The final panel focused on leveraging housing vouchers as a ladder to economic mobility for low-income families. J-PAL North America co-scientific director Lawrence Katz (Harvard University) and Gregory Russ (Cambridge Housing Authority) spoke on the seminal Moving to Opportunity experiment—a project launched by the U.S. Department of Housing and Urban Developing in 1994 to study the impact of randomly selecting low-income families to receive housing vouchers, some of which required families to move to low-poverty neighborhoods. A recent follow-up study found that children who moved before age 13 with a voucher that was restricted to low-poverty neighborhoods went to college at higher rates and had incomes that were 31 percent higher compared to their peers who did not receive a voucher. This research has spurred an innovative collaboration between 17 public housing authorities and researchers, called Creating Moves to Opportunity, to develop and implement new interventions focused on helping families move to higher opportunity areas.

The second day of the conference included a series of workshops during which academics, policymakers, and practitioners addressed some of the practical challenges of setting up new evaluations and shared lessons across jurisdictions.

J-PAL North America is currently accepting letters of interest for the second round of the J-PAL State and Local Innovation Initiative from governments interested in developing randomized evaluations and using the evidence generated to inform their decision-making. The deadline to submit letters of interest is February 17th, 2017. For more information, visit www.povertyactionlab.org/stateandlocal or contact Julia Chabrier at [email protected].

Videos of each speaker from the conference can be found here: