The Impact of Migration Subsidies on Rural Labor Markets in Bangladesh

Rural to urban migration is an integral component of economic development, but there is limited evidence on the decision to migrate and little evidence on how emigration affects rural labor markets. To better understand these, researchers varied the proportion of travel grants offered to landless households in rural villages in Bangladesh to assess the impact of the grants on temporary migration and income during the agricultural lean season—one of the hardest economic times of the year due to drops in food affordability. Providing cash subsidies for seasonal migration not only benefited the migrants and their families, but also indirectly improved welfare for households who were not offered a cash subsidy and increased agricultural wages in origin labor markets.

Rural to urban migration is an integral component of economic development, but there is little experimental evidence on the drivers of migration and how emigration affects rural labor markets. Recent research has found that workers are more productive in cities in both developed and developing economies, but anti-migration bias remains rampant in policy circles; many governments have historically reacted to migration as if “it were an invasion to repel,” setting restrictions on migrants’ transport, settlement, and employment opportunities. While migration could benefit landless village residents by reducing competition for work, it could also reduce local economic productivity if a high number of skilled workers leave simultaneously. Therefore, understanding what drives someone to migrate and the consequences of that migration for broader rural society (e.g. local labor markets, wages, and food prices) is essential. Can alternative policies that encourage connections between regions for improved labor opportunities decrease rural poverty and inequality while also improving rural livelihoods?

Globally, approximately 805 million people are food insecure, the majority of whom live in rural communities. Roughly 300 million of the rural poor experience seasonal hunger, which often occurs between planting and harvesting, when farmers have to wait for the crop to grow, labor demands are low, and food prices are higher than normal.1

In the Rangpur region of northern Bangladesh, many rural households face seasonal hunger in October-November (and March-April)—a time in which demand for agricultural labor falls due to waiting periods in the crop cycle, commonly referred to as the lean season. This results in nearly 16 million landless poor—who traditionally supply agricultural labor on others’ farms—struggling to find employment. Around 56 percent of the population in the area of this study, in the Kurigram and Lalmonirhat districts of Rangpur, are landless poor. However, nearby urban and peri-urban areas, which are less dependent on agriculture, do not face the same seasonal downturns and can, instead, offer low-skilled employment opportunities during the same period, suggesting a mismatch in the location of jobs and the location of workers during the lean season in rural areas. Seasonal migration is one of the primary methods used to diversify income and cope with this seasonality. 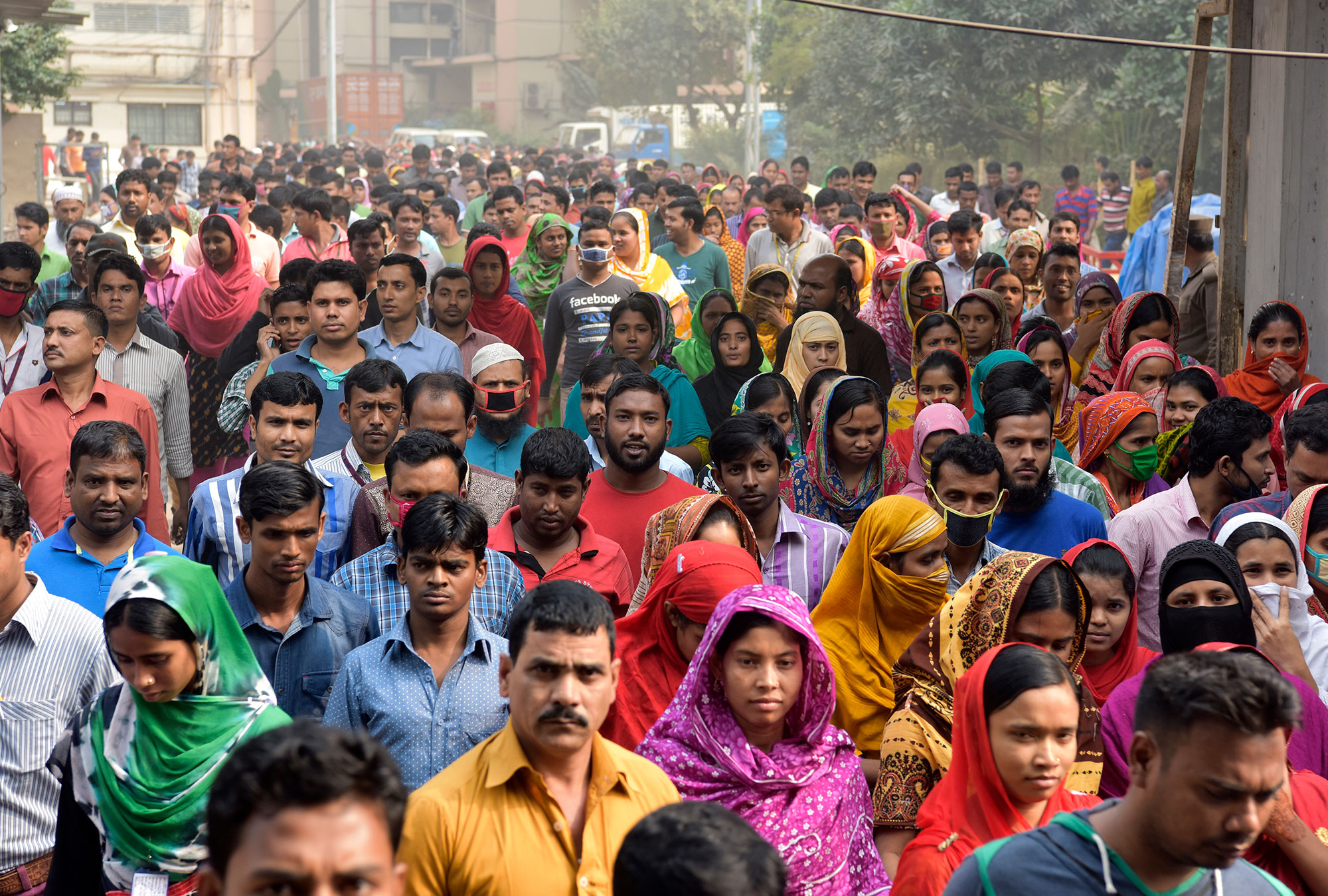 This study is a follow-up of a previous study by Bryan et al. (2014), which found that offering conditional cash transfers for migration increased household consumption.2 Researchers expanded on the original design to measure the effects of migration at the community level and to study the overall impact of the program on the rural economy.

Researchers partnered with RDRS—a local NGO that runs poverty alleviation programs—to help landless households participate in temporary migration during the hungry season by randomly varying the number of landless families in villages that were offered small transport subsidies. Prior to the program, Innovations for Poverty Action Bangladesh conducted village censuses to identify eligible households based on two criteria: they owned less than 0.5 acres of land and had reported in 2008 that a member of their family had experienced hunger—i.e. skipped meals—during the 2007 hungry season.

Beginning in November 2014, RDRS randomly offered cash grants worth 1,000 Taka (US$13) to rural households to cover the round-trip cost of one person’s travel to one of the nearby cities where jobs were more prevalent during the lean season. Cash grants were transferred to households conditional on one member agreeing to emigrate during the lean season. To ensure adherence to conditionality, an RDRS monitor visited each household to check whether someone had migrated or not.

To assess the overall impact of the subsidies on the rural economy, including on households that did not receive a cash grant offer (but lived in a village where the subsidy was offered), researchers randomly varied the proportion of eligible households in each village who received migration offers:

Throughout and immediately following the intervention, the research team conducted surveys to capture the impact of offering cash grants for migration on: households’ migration and work choices, earnings and hours worked, employers’ wage offers and profits, and local food prices. They also conducted two additional surveys two years after the intervention to capture longer-term effects on households and employers.

A similar evaluation was attempted in 2013. However, due to an unprecedented wave of political strikes and violence during the months when rural households typically migrate made it both risky and costly for participants to migrate—with the price of transport increasing by 69 percent. Consequently, researchers were unable to enforce the conditionality of the grant, resulting in an unsuccessful program evaluation.

Providing cash subsides for seasonal migration not only benefited the migrants and their families, but also indirectly improved welfare in the broader rural community. The cash grants increased emigration, increased migrants’ income, and made it less competitive to get work within the village.

Migration: The intervention increased the likelihood that households sent at least one seasonal migrant to search for work in nearby cities. Households in low- and high-intensity villages were 24.8 percentage points (72.5 percent) and 39.8 percentage points (116.4 percent) more likely to send seasonal migrants, relative to the 34.2 percent of households who sent migrants in comparison villages. These effects persisted—one year following the intervention, households that received subsidy offers in high-intensity villages were 29.3 percentage points (77.5 percent) more likely to re-migrate even when cash grants were no longer provided, relative to 37.8 percent of households in comparison villages.

When a higher proportion of households within a community simultaneously received subsidy offers, households that were offered cash grants were more likely to migrate and induced others connected to them to migrate as well. Households located in a high-intensity village, but who did not receive a subsidy offer, had a 9.7 percentage point greater likelihood to migrate than households in comparison villages. However, these households only migrated if they knew another household that received an offer and this effect was amplified if households had a “strong” connection with another subsidy household.

These results suggest that people coordinate their migration plans in order to reduce associated risks. Thus, villages where many households were offered migration subsidies experienced much larger changes to the village labor market during the intervention.

Earnings: Those offered subsidies in both high- and low-intensity villages experienced large gains in migration income. Migrants traveling from high- and low-intensity villages earned an extra 6,173 Taka (US$80) and 4,672 Taka (US$61), respectively, at their destinations. Re-migration a year following the intervention led to persistent gains in income. However, extra income did not increase savings, implying that households in the sample, who were extremely poor, consumed any extra income during the lean season.

Village Economy: When large numbers of people were induced to migrate, the village economy benefited. Both agricultural wage rates and available work hours increased for laborers when they returned to their villages, benefiting laborers at the expense of the richer landowners who hire them. Although food prices in villages with high-intensity migration increased slightly overall—largely driven by an increase in the price of fish and prepared foods, like tea and samosas—the prices of main staples, including rice and flour, did not change.

Cost-effectiveness: Researchers suggest that the intervention was at least five times as cost effective in improving food security as four other major food-for-work and cash transfer programs that have been evaluated in the Bangladeshi context.

Informed by the results of this study, RDRS, in collaboration with IPA Bangladesh and Evidence Action, scaled up the program to reach around 158,155 eligible households across 699 villages in 2017. Implementation monitoring during the 2017 program revealed mixed results: specifically, program operations expanded substantially, but there were implementation challenges and take-up rates were lower than expected. Testing the program at scale, a different randomized evaluation found that the program did not have the desired impact on inducing migration and, consequently, did not increase income or consumption. After making changes to implementation processes, Evidence Action conducted a second evaluation-at-scale, the results of which emerged in early 2019, and has since decided to terminate the program.3

3 Levy, Karen, and Varna Sri Raman. “Why (and When) We Test at Scale: No Lean Season and the Quest for Impact.” Evidence Action blog, posted on November 19, 2018. https://www.evidenceaction.org/why-test-at-scale-no-lean-season/