Information campaigns are often regarded as a low-cost way to protect people from environmental health risks. In the case of arsenic-contaminated well water, free testing campaigns have been shown to encourage households to switch to safer drinking sources. Yet, testing is not always provided for free, and there is a need to develop a sustainable market. In Bangladesh, researchers evaluated the impact of different selling schemes on demand for testing, and the impact of test results on switching to a safer well. Although group test sales and well safety placards increased substantially the likelihood that households switched to a possibly safer well, demand for testing was very low.

Access to clean water remains a key health challenge in many countries. Some of these health conditions, such as those resulting from the consumption of arsenic-contaminated well water, are preventable by encouraging behaviors that avoid exposure. Where naturally occurring arsenic in tubewells is widespread, piped water from regulated and monitored sources would likely be most effective at eliminating the root cause of exposure. However, these large-scale investments in infrastructure may be very expensive or unsustainable. As a result, information campaigns, such as testing, are often seen as more viable, low-cost policy instrument.

Free testing for arsenic has been shown to encourage households with unsafe wells to switch to safe drinking sources.1 However, an important policy question is how to drive demand for testing when tests are not provided for free. Does the way in which tests are sold affect take-up as well as the way risk-mitigating behaviors reacts to the information provided by the tests?

In Bangladesh, millions of households in rural areas rely on water from privately owned and unregulated tubewells. The country remains in the midst of a health crisis due to the presence of low-dose, naturally-occurring arsenic in these wells. As of 2009, it was estimated that 20 million people were likely exposed to arsenic levels above the Bangladesh standard of 50 parts per billion (ppb). It is estimated that exposure to arsenic reduces a household’s labor supply by 8 percent,2 and household income by 9 percent for every earner exposed.3

Even over a small area, there may be a mix of high- and low-arsenic contaminated wells. Given that the contamination status of a well rarely changes overtime,4 encouraging households to switch from contaminated to clean wells may be a viable policy option.

Arsenic contamination is widespread in the Sonargaon sub-administrative unit, or upazila, in which this evaluation took place. Most recent blanket testing from the Bangladesh Arsenic Mitigation and Water Supply Program (BAMWSP) in 2000 found that in about 80 percent of villages, 40 percent or more of tubewell water was unsafe. Where free testing hinges on significant investment from donors and government, it is important to establish a sustainable market for arsenic testing to mitigate arsenic consumption. 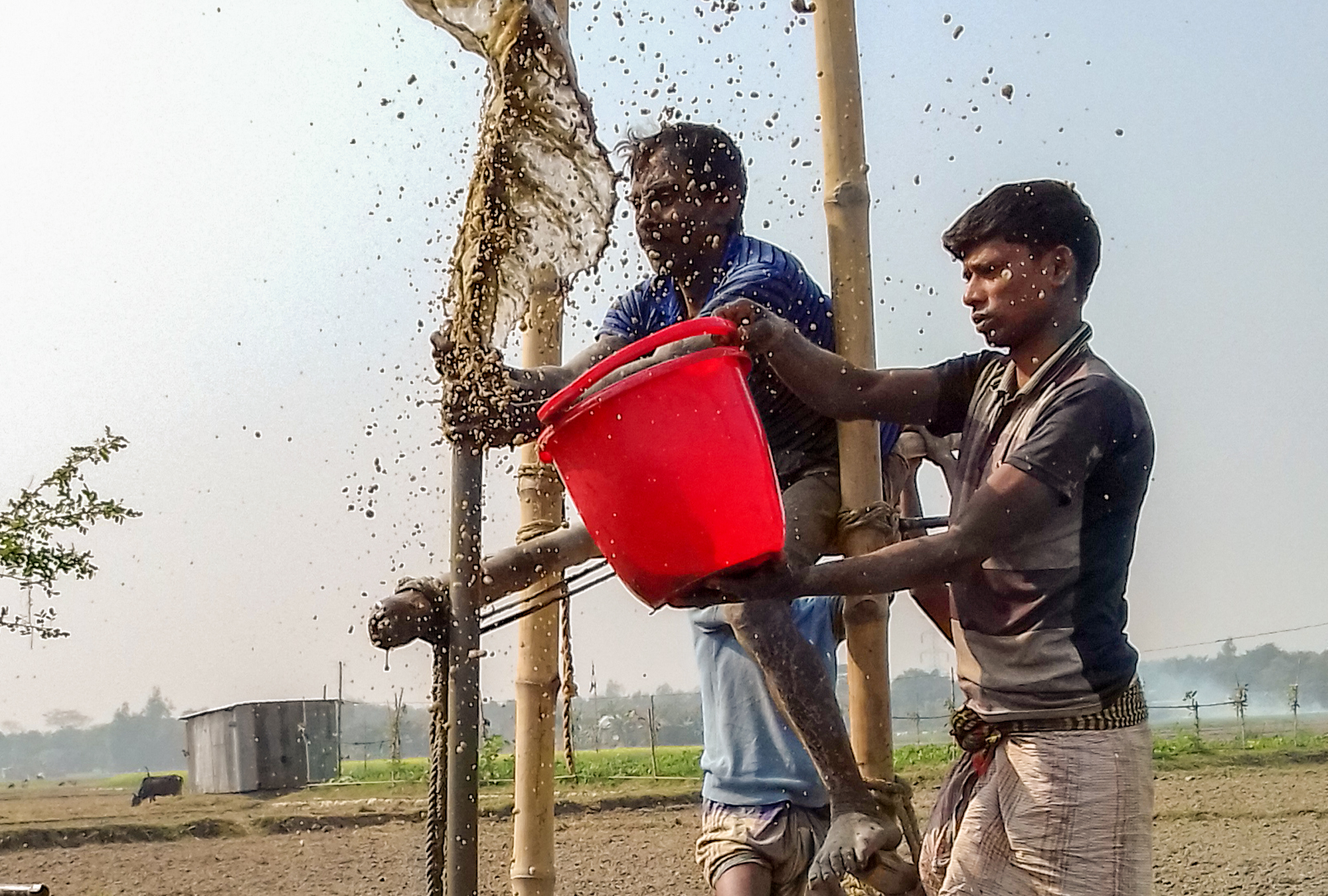 Researchers set out to identify the impact of different selling schemes on the demand for arsenic testing and the impact of an unsafe testing result on the adoption of risk-mitigating behaviors.

Researchers selected 112 villages in Sonargoan with more than 10 wells and with 40-90 percent of wells being unsafe, according to the BAMWSP blanket testing campaign carried out in 2000.  All households were offered an arsenic test at a subsidized price of BDT45 (US$ 0.60 in 2018), the cost of which would cover the salary of surveyors and their supervisor. The cost of the field kit (US$ 0.30 in 2018) was covered by the project. Villages were randomized into one of three groups:

Between January and June of 2016, surveyors identified all wells in the study villages and conducted home visits with well owners or caretakers—typically the most senior woman in the household. During this visit, surveyors explained the risk of consuming arsenic-contaminated tubewell water and administered a short questionnaire on drinking and cooking water use, tubewell age and depth, and opinions about well safety. Afterward, they offered to test the well for a small fee. In the case of purchase, surveyors distributed a color-coded laminated hand-written test result and well identification number. Roughly eight months later, between August 2016 and January 2017, researchers revisited well owners or caretakers to measure well-switching behavior.

Informal group agreements and visual reminders of well arsenic concentration through metal placards did result in households switching wells when their own well was found to be unsafe. However, few households took up the tests under any of the three schemes.

Knowledge of arsenic: Despite that almost all respondents were aware of arsenic in well water and the associated health risks before the intervention, 76 percent of respondents did not know whether their well was safe. Almost all wells had no visible sign of safety status, such as the spout being painted red or green, or a metal placard attached.

Demand for testing: Despite the low cost of testing, widespread awareness about arsenic in tubewells, and low knowledge about the safety status of individual wells, only 25 percent of households purchased a test under any of the three selling schemes.  Neither the group sales nor the metal placard impacted demand for testing compared to private sales.  The low demand is consistent with a larger body of evidence that finds that charging fees for preventative health products reduces take-up.

Results of arsenic testing: Overall, 19 percent (455) of the tested wells were deemed unsafe, which was much lower than the BAMWSP estimate of 40-90 percent of wells 10 years prior. Researchers attribute this to greater knowledge of local arsenic risk as well as more households being able to afford deeper wells that are safer.

Effect of testing on switching to safer wells: Thirty percent of households who were privately offered a test and whose wells were deemed unsafe switched to a different water source. Compared to private sales, group sales and placards increased rates of switching by 26 and 42 percentage points, respectively. The researchers note, however, that the safety status of the well to which households switched was unknown.

Potential mechanisms through which the testing intervention impacted well selection include making well sharing easier through soft-commitments (group sales), visible reminders about the safety of well water (placards), and facilitating the spread of information about safe options within a village (group sales and placards).