Despite recent economic growth in Bangladesh, food insecurity remains widespread. Researchers evaluated the impact of an agricultural training program for farmer groups on technology adoption in rural Bangladesh, and investigated what drives adoption and who is affected by the training, both directly and indirectly.

In South Asia’s highly agrarian and populous countries, farm holdings are typically small and agriculture is characterized by intensive cultivation.1 Despite recent economic growth, 17 percent of the population was undernourished in 2011-2013, making the region home to the highest number of undernourished people in the world.2 Adoption of certain farming technologies, such as improved seeds, farm-yard manure, and integrated pest management, may enable farmers to produce more food and earn more income, yet many farmers have not adopted these technologies. This research contributes to our understanding of technology adoption in the region.

Over the last two decades, Bangladesh has achieved impressive economic growth and poverty reduction. Its agricultural sector grew at a rate of 4.8 percent between 1990 and 2005. However, poverty-related food insecurity is widespread, bolstered by the soaring prices of key staples like rice, wheat, and legumes. The country has a poverty rate of over 30 percent and a highest incidence of malnutrition: in 2008, Bangladesh’s food insecure population was estimated at 65.3 million, or 45 percent of the population.3

The Government of Bangladesh is pushing for increased use of technology and more intensive agricultural practices to improve food security and sustain economic growth. Funded by the Global Agriculture and Food Security Program (GAFSP), the government is implementing the Integrated Agriculture Productivity Project (IAPP) under the supervision of the World Bank and U.N. Food and Agriculture Organization. The project aims to enhance the productivity of crops, livestock and fisheries. The project is taking place among small-scale and marginal farmers in northern and southern districts characterized by high rates of poverty and food insecurity, and vulnerability to the negative effect of natural shocks, such as tidal surges in the south and flash floods and drought in the north. 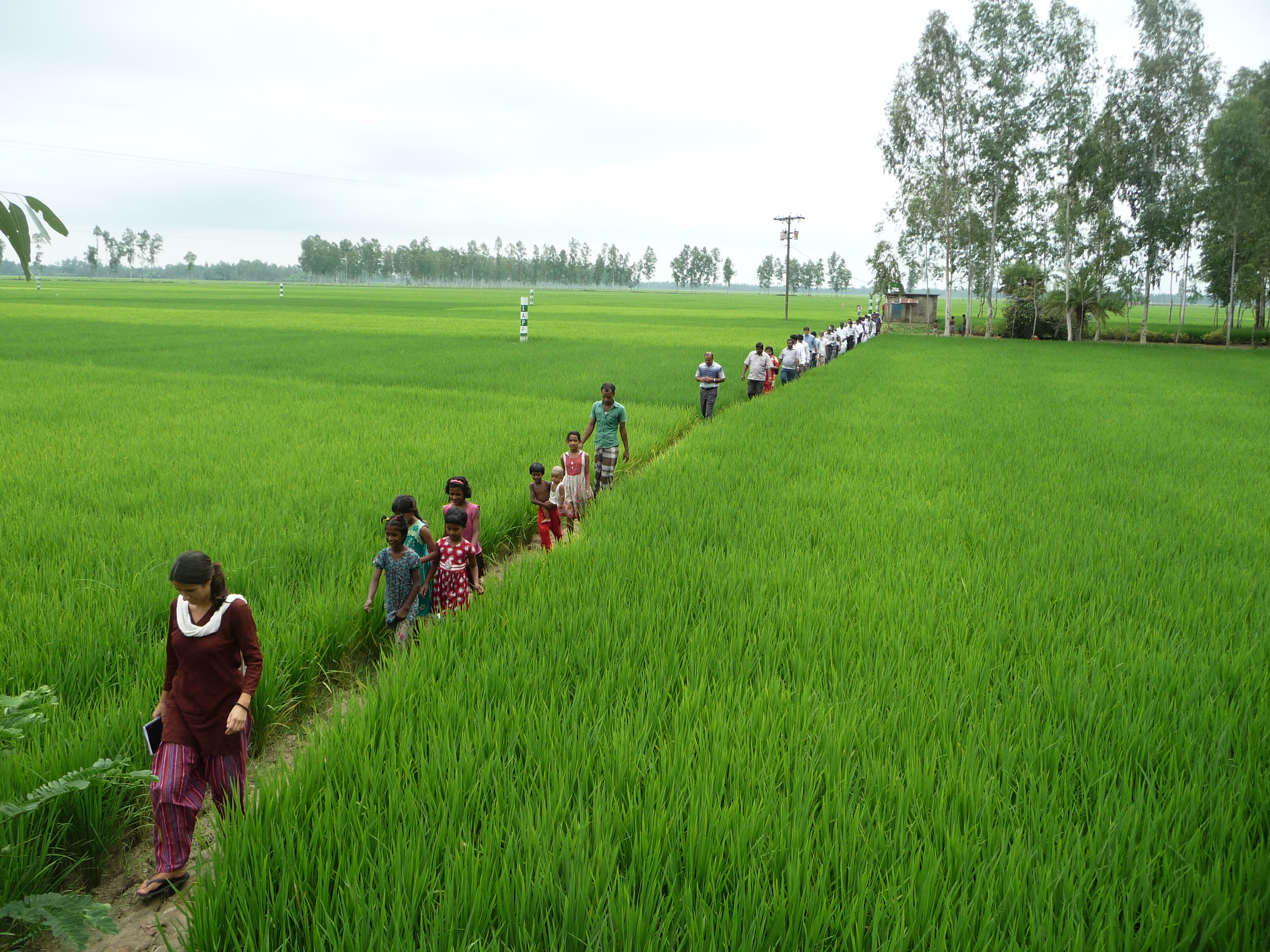 Researchers are conducting a four-year randomized evaluation in 316 villages to study the impact of the IAPP’s livelihoods field schools (LFS) on technology adoption and to investigate what factors drive adoption of new technologies. The FFS consists of groups of approximately 25 farmers who meet twice a month with extension agents. The aim of the school is to promote adoption of new seed varieties and improved production practices.

To evaluate the overall impact of IAPP activities on farmer livelihood and the effect of FFS on technology adoption, in 2012 researchers randomly assigned 96 villages in six districts to either the treatment group, which participated in program activities immediately, or the comparison group, which received the program two years later. In treatment villages, one demonstration farmer was chosen for each type of technology introduced into the farmer group. This demonstration farmer received free seeds, fertilizer, and training. The selected farmer cultivated the promoted crop in the first year, and the rest of the group was expected to learn from his or her experience. In the second year, the rest of the farmers were encouraged to grow the crop. Farmers that adopted the technology in the second year received free seeds and some training sessions but no other inputs.

In addition, to test which demonstration plot approach produces the greatest increase in adoption within the farmers’ field school model, a randomized evaluation is being conducted in 220 villages in 2 districts. Villages have been randomly assigned to one of five treatment arms:

This study is evaluating the impact of the technology adoption program on the FFS members’ crop productivity, fisheries productivity, and livestock productivity. The study is also measuring the impact of IAPP on farmers’ overall income, income from agriculture, and food security in relation to farmers who did not receive the training. Furthermore, researchers are mapping the social networks within groups in order to understand how relationships affect technology adoption, evaluate any differences in how the program affects men and women, and conduct a cost-benefit analysis.

2 U.N. Food and Agriculture Organization. “The State of Food Security in the World.” 2013