The Effects of STEM Summer Programs on College Major, Persistence, and Graduation for Underrepresented High School Students in the United States

Black and Hispanic workers are underrepresented in the well-paying fields of STEM (science, technology, engineering, and mathematics), contributing to racial and ethnic wage gaps. Pipeline programs that support historically underrepresented students interested in STEM offer promising solutions, but there is little empirical evidence on their effectiveness. Researchers evaluated three STEM-focused summer programs for high school students and found that the programs increased students’ likelihood of attending a highly-ranked university, graduating, and earning a degree in STEM.

In the United States, Black and Hispanic workers are underrepresented in the STEM (science, technology, engineering, and mathematics) workforce. In 2021, Hispanic workers made up 17 percent of total employees across all occupations, but just 8 percent of all STEM workers. Black workers comprised 11 percent of all employed adults, compared with 9 percent of those in STEM occupations.1 Given the concentration of high-wage jobs in STEM fields, this underrepresentation contributes to systematic racial and ethnic wage gaps.

Many of these high-wage jobs require specific STEM-focused college degrees, so racial disparities in degree attainment underlie some of these employment gaps. Despite Black and Hispanic students representing 14 and 21 percent of the college-age population respectively, only 9 percent of STEM bachelor’s degrees went to Black students and 16 percent to Hispanic students in 2022. This disparity reflects a broader racial gap in college graduation, with Black and Hispanic students less likely to graduate from a four-year university than their white peers.2 Inequity in higher education can be traced to a long exclusionary history, in which higher education institutions were created by and for white people and benefitted from the African slave trade and slavery.

Affirmative action policies were a leading solution to address enrollment disparities starting in the 1960s, but these practices have faced backlash in recent years.3 Pipeline programs offer an alternative solution to increasing higher education participation among students of color but few have been rigorously evaluated to date.

Pipeline programs are interventions that aim to promote diversity within certain fields, such as STEM, by providing historically underrepresented students with networking opportunities, mentorship, skills-building, and other resources at key stages throughout their education. Targeting students as early as high school is thought to be particularly impactful at bolstering diversity by impacting college attendance and college major choices among underrepresented students.

Researchers studied the impact of three STEM-focused summer programs at a Host Institution (HI), a highly-ranked technical university in the Northeast. All three programs targeted high school students during the summer before their senior year but differed in intensity and modality.

Six-week on-site program: The six-week program was held on the HI campus and offered a shortened version of the HI’s first year college curriculum, along with college counseling, field trips, introductions to role models in STEM fields, and a college-like living experience. About 80 students are offered a seat in this program each year.

One-week on-site program: The one-week version program offered a short project course in a STEM field and an abbreviated version of other aspects of the six-week program. Typically, 75–120 students participate in this program each year.

Six-month online program: The online version of the program offered a six-month engagement in STEM enrichment activities, with online speakers and interactions, and a short “conference” visit to the HI campus over the summer. About 150–175 students participate in the online program. 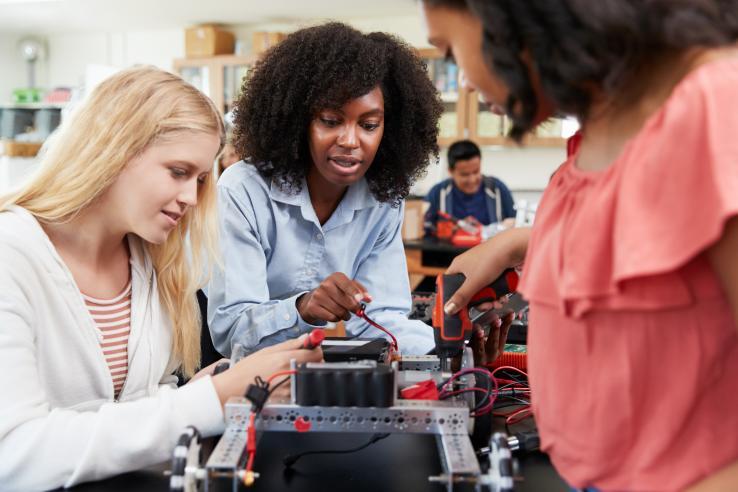 Researchers investigated whether any of these three STEM programs impacted students’ educational outcomes. Three cohorts of high-achieving, STEM-interested students were randomized to either one of the three programs or a control group in the summer between their junior and senior years of high school in 2014, 2015, and 2016.

Researchers used conditional, block randomization. The program’s selection committee first ranked students based on their suitability to the programs. Suitability was evaluated based on grades, test scores, letters of recommendation, and application essays. The selection committee also considered the students’ background, including whether the applicant would be the first in the family to attend college or achieve a STEM degree, if the applicant’s high school did not have strong college preparation programs, or if the applicant was a member of a group that is underrepresented in the study and fields of science and engineering (African American or Black; Hispanic or Latino/a; or Native American).

Researchers evaluated the effect of the programs on college matriculation, completion, and graduation with a STEM degree using program application admissions information from the HI and college attendance and enrollment information from the National Student Clearinghouse.

Students offered seats in the STEM summer programs were more likely to enroll in a highly-ranked university and persist through and graduate from college. The programs also increased the likelihood that students graduate with a degree in a STEM field, which increases potential earnings.

College persistence:
Each of these three programs increased college persistence. While there were no significant differences in attendance during the first few years of college, by their fourth year, those offered a seat in any one of the three STEM summer programs were 3–12 percentage points more likely to still be enrolled in a four-year college (a 4–16 percent increase from a baseline of 75 percent).

These effects are likely driven by enrollment in Barron’s most competitive colleges, as the increases in overall graduation are the same as what would be predicted by the shifts in institutional graduation rates.

The researchers used an estimate of potential earnings to understand how the shift in composition of majors towards STEM may have changed future prospects. Researchers found that the degrees may induce potential earnings increases of 2–6 percent for students who graduated within five years.

Mechanisms and Policy Implications:
Researchers suggest that these findings are due to the programs changing college application behavior. Students who were offered a seat in the program were more likely to apply to more universities and more prestigious universities, translating into more chances to be accepted into and attend a competitive institution. Survey results suggest that students who attended these programs may also have increased knowledge of the admissions process, including awareness of resources. While programs aimed at increasing diversity in STEM fields often occur during or after college, there is evidence that diversity programs should be coupled with investing earlier in the pipeline. This research supports the idea that targeting underrepresented students before applying to college may better strengthen the pipeline, and therefore the diversity of students enrolling in higher education and ultimately entering STEM careers.