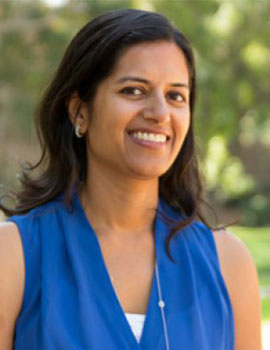 Manisha Shah is a Professor of Public Policy at the UCLA Luskin School of Public Affairs. Her primary research questions and teaching interests lie at the intersection of applied microeconomics, health, and education. She has studied the economics of sex markets in order to learn more about how effective policies and interventions can slow the spread of HIV/AIDS and other sexually transmitted infections. Manisha also works in the areas of child health and education. She is currently leading projects in Tanzania, Indonesia, and India and has also worked extensively in Ecuador and Mexico.

Manisha received her PhD from the University of California, Berkeley.

Family planning and sexual and reproductive health (SRH) programs tend to focus on women and girls, but most decisions related to sexual behavior involve men and boys, too. The idea is to test whether female SRH outcomes fare better in communities where we are also talking to the adolescent males.

News
A research spotlight on some of the world’s vulnerable people
Evaluations
Promoting Safe Sex Among Adolescents in Tanzania
Beyond Bias
The Impact of a Large-Scale Rural Sanitation Project in Indonesia
Publications
Scaling Up Sanitation: Evidence from an RCT in Indonesia
How Does Health Promotion Work? Evidence from the Dirty Business of Eliminating Open Defecation
Blog Posts
Affiliate spotlight: Manisha Shah on her research on adolescent sexual and reproductive health