Information and Referrals at the End of Middle School, France

Low-achieving students may lack information about their prospects and options after middle school, unrealistically expecting to qualify for selective high school programs or to find a job without completing secondary education. Researchers evaluated the effects of a program designed to improve parental knowledge about students’ opportunities at the end of middle school on schooling decisions and dropout behavior. The program helped parents and their children make more realistic educational choices, reducing grade repetition and high-school dropouts.

School dropout is a widespread problem in many industrialized countries: In 2012, 12.7 percent of youth in Europe aged 18-24 had not completed high-school and were no longer in education or training (representing roughly 5.5 million youths).1 These youth are more likely to face unemployment, poverty, and delinquency.

Many factors can lead students to leave school before graduation. Students may not fully understand the benefits of education (such as higher future earnings), face financial hardship, or lack support from their families, schools, or communities. They may also lack information about their prospects and options, unrealistically expecting to qualify for selective high school programs or to find a job without completing secondary education. Can informational meetings to improve parental knowledge about students’ opportunities have an effect on schooling decisions and dropout behavior?

In France, ninth grade marks the end of compulsory schooling and forms a decisive period during which students choose their high-school track. The options include a three-year academic or vocational track and a complex system of two-year vocational schools. Given that only the best students qualify for the three-year academic program, the track assignment process is often a source of disappointment and disengagement for students, especially those with poor academic records and incomplete information about available alternatives. 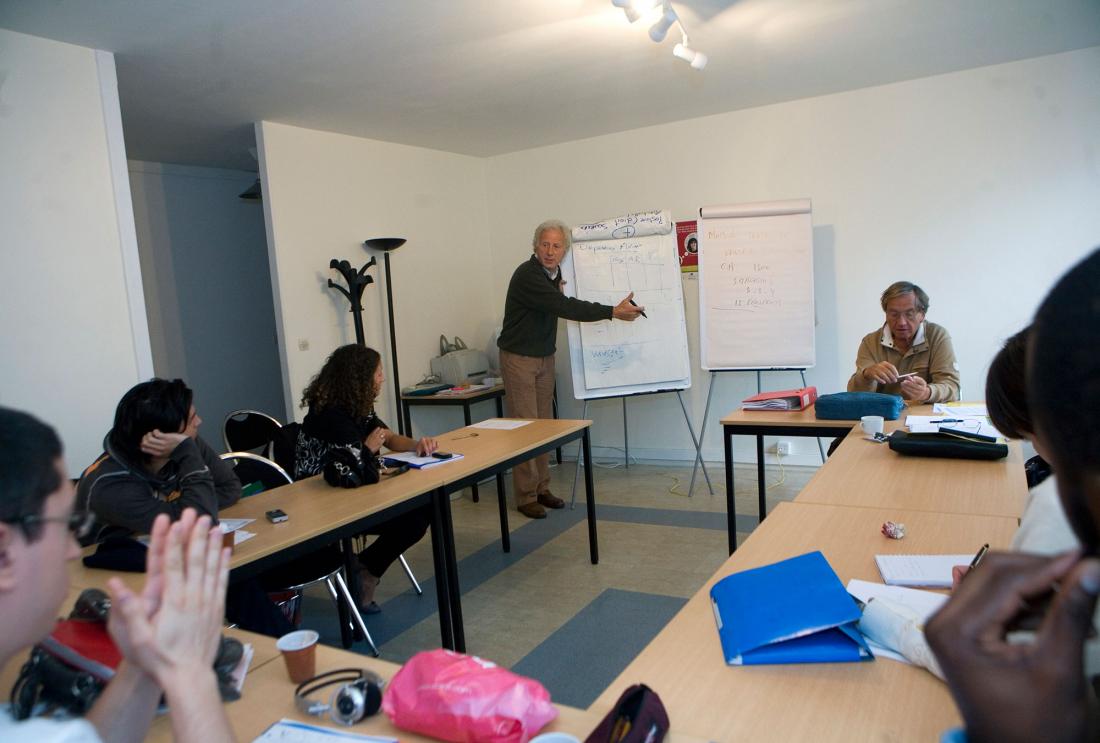 Researchers evaluated a program designed to provide parents of children with poor academic performance information on the options their children have at the end of compulsory school. The program included 4,291 students in 179 classes at 37 middle schools in the suburbs of Paris.

Researchers asked school principals to select the 25 percent of students most at risk of dropping out within each class, or the bottom quarter of students in terms of academic performance. Then researchers randomly assigned roughly half of the classes within each school to a treatment group that received the intervention (97 classes), and the remaining classes to a comparison group (82 classes).

Principals invited parents of selected students in treatment classes to attend two group meetings during which they discussed the specific aspirations of each family in light of the academic aptitudes of their child. Whenever necessary, principals provided targeted information on alternatives to grade repetition or dropout, such as vocational high schools and apprenticeships.

Effects on educational choices: When it came time for students to rank their preferred high-school programs, the proportion of students who included at least one two-year vocational program in their list of possible high-school choices increased by 30 percent in the treatment group (compared to 16 percent of students in the comparison group). This change was mostly driven by students who included a two-year program as their first choice. The number of students wishing to repeat ninth grade with the hope to improve grades enough to access a selective three-year high school program decreased by a similar proportion (7 percent in the treatment group compared to 10 percent in the comparison group). These results suggest that the program not only adjusted expectations about the possible outcomes of the high school assignment process but also enhanced perceptions of two-year vocational tracks.

The effect on dropout rates was stronger in the second academic year after the program, as most of the treatment group students enrolled in two-year vocational tracks succeeded in completing the first year and remained enrolled for a second year. Overall dropout rates decreased by 5 percentage points (from 20 percent in the comparison group).

Effects on non-selected peers: Students selected for the program, who were the lowest-performing students, influenced their friends with similar, but slightly better academic records. These students were also more likely to choose vocational high-schools instead of attempting the more selective academic track.

These findings encouraged the government to include the program in its 2014–2017 plan to reduce school dropout, expanding the program to all public schools wishing to participate. For more details, see the evidence to policy case study.

1 result(s)
Considering All the Options: A Low-Cost Way to Reduce School Dropout