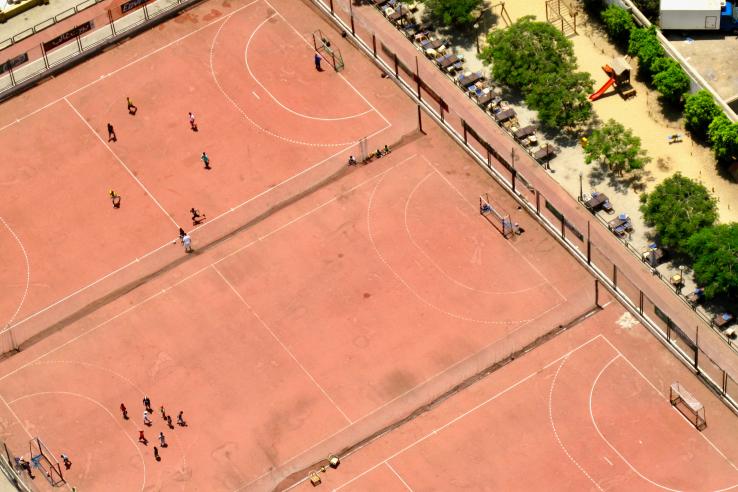 A new study, released today in Science, points to a way to help repair social ties and promote coexistence after war. The study found that in post-ISIS Iraq, mixing Christians and Muslims on soccer teams made Christian players more tolerant toward Muslims in their league, though the sentiments did not extend to Muslims in the broader community. The findings suggest that meaningful social contact can build community-level social cohesion with peers and acquaintances after war.

The researcher, Salma Mousa, a postdoctoral fellow at Stanford’s Immigration Policy Lab and Center for Democracy, Development, and the Rule of Law, drew on the social science “contact hypothesis,” which posits that under the right conditions, cooperative contact between groups can reduce prejudice. While the contact hypothesis has been widely evaluated, until recently, there has been relatively little evidence on whether it is an effective means of building trust and strengthening  social bonds in contexts experiencing or recovering from conflict.

In Iraq, under ISIS, Christians were violently driven from their homes and subject to mass atrocities in 2014. As many began to return to their homes, between 2016 and 2018, they found their cities ruined. Many Christians believed their Muslim neighbors were complicit in the prior ISIS raids, contributing to intense levels of distrust, support for local self-defense militias, and the potential for a backslide into conflict. Muslim groups who themselves were persecuted by ISIS similarly drew Christian distrust for migrating into traditionally Christian enclaves, a pattern seen as diluting the already precarious Christian presence in northern Iraq. Harnessing the social potential of team sports and the universal popularity of soccer in Iraq, Mousa partnered with a local community organization to set up a series of soccer leagues and rigorously evaluate whether intergroup contact could build social cohesion between the Christian and Muslim players. The teams faced one key condition for participating: At the beginning of the season, they would randomly be assigned an additional three players who would either be Muslim, drawn from other local teams, or Christian.

Dr. Mousa monitored attitudes and behaviors over the 10-week league, as well as six months after the league had ended.  She found Christians with Muslim teammates had more open and trusting attitudes towards their fellow Muslim players than those on all Christian teams, though these sentiments did not extend to the broader Muslim community.

“The players warmed up to each other over time, teams began to bond, and new friendships emerged as a result of the leagues, which helped to create a new norm around the acceptability of inter-religious teams,” Mousa explains. “It also became clear that these friendships were not necessarily equipped to overcome the weight of the ISIS occupation and displacement experience. It was natural for players to befriend their teammates, and these ties are important in such a fragile setting. Expecting these ties to heal the psychological and social wounds left by ISIS, however, seemed to be too large of an ask at the end of the day,” she added.

"A challenge with many prior social contact studies has been their inability to measure changes in behaviors and attitudes outside of a lab setting—to understand how exposure to the intervention translates into real-world actions," said Aprille Knox, Policy Manager of J-PAL’s Crime, Violence, and Conflict sector. “Mousa's study develops innovative measures for observing behavioral and attitudinal changes both on and off the soccer field, as well as over a longer-term time horizon than many previous studies have been able to observe, adding valuable insights to our understanding of if and how contact works in post-conflict settings."

Mousa finds that Christians who played on teams with Muslim players were 26 percentage points more likely to vote for a Muslim player (not on their team) to receive a sportsmanship prize, 13 percentage points more likely to sign up for a mixed team next season, and 49 percentage points more likely to train with Muslims six months after the league ended. However, when it came to tolerance toward Muslim strangers, players with Muslim teammates were no more likely to attend a mixed social event or to patronize a Muslim-owned restaurant three to four months following the intervention. And personal beliefs on salient issues—like blaming Muslims for Christian suffering—remained unchanged. Taken together, these results highlight the potential for civic organizations that cut across social cleavages to rebuild social trust after conflict, at least in relationships key to day-to-day coexistence and community-building. For a more detailed summary, see the J-PAL evaluation summary.

“With nearly 80 million people around the world displaced by violence and conflict, there is an increasing need for evidence on how to rebuild trust and community cohesion,” said Sebastian Chaskel, the Peace & Recovery Program Director at Innovations for Poverty Action, the research and policy non-profit, which along with J-PAL, helped support the study. “This study points to a practical tool to heal the rifts between communities that too often remain in the wake of ethnic conflict,” Chaskel said.

Similar evaluations are currently being implemented with NGO partners in Lebanon and Colombia, looking at the role of intergroup contact between Lebanese and Syrian underprivileged youth, as well as between Venezuelan migrants and Colombians in Bogota.

Mousa's findings also contribute to a growing base of rigorous evidence in the MENA region. To further these efforts, the Abdul Latif Jameel Poverty Action Lab (J-PAL) has just launched its newest regional office, J-PAL MENA, based at The American University in Cairo, which seeks to advance the use of randomized evaluations of programs and policies and to support the use of rigorous evidence in decision-making.

Funding for this project was provided by the UK Department for International Development, awarded through J-PAL's Crime and Violence Initiative and IPA's Peace & Recovery Program.