Last updated:
J-PAL affiliated researchers supported the Government of Chile in designing a cash transfer program during the Covid-19 pandemic, which reached over 3 million households. 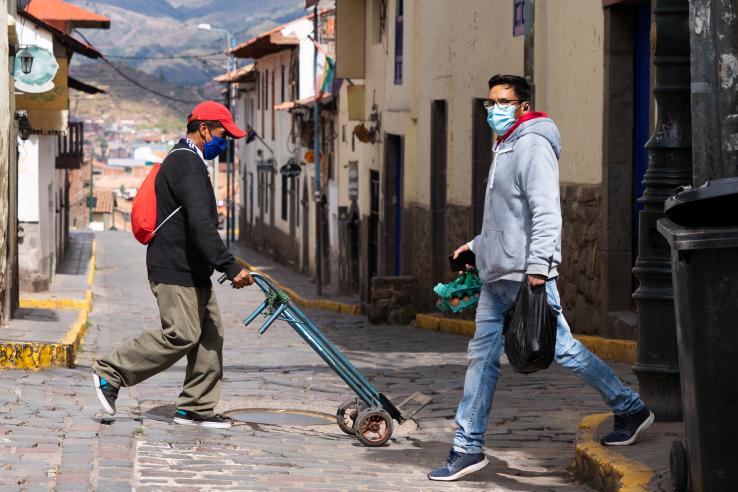 The Covid-19 pandemic has imposed unprecedented social and economic challenges. For example, business closures have pushed an estimated 176 million people into extreme poverty in 2020 alone. Around the world, low-income populations have been disproportionately impacted by the crisis, facing higher job losses, increased health risks, and reduced access to support services, with little or no resources to help maintain their livelihoods. Social protection programs have therefore become crucial for providing income to vulnerable groups, particularly informal workers, throughout the crisis.

In Chile, J-PAL affiliated researchers Francisco Gallego and Claudia Martinez were part of a team of economists and policy experts from the Pontificia Universidad Católica de Chile (PUC Chile), who, along with staff from the J-PAL Latin America & the Caribbean (LAC) office, supported the government in designing a cash transfer program for workers who were not formally employed or previously registered in the government’s database of beneficiaries. Based on findings from 24 randomized evaluations looking at the effectiveness of different types of transfers and delivery schemes, the team drafted a proposal that helped inform the design of Chile’s Ingreso Familiar de Emergencia (IFE) program. Since implementation began in May 2020, the US$830 million program reached over 3 million households in the first five months.1

Covid-19 has disproportionately impacted low-income populations, leading to questions on how best to target and deliver social protection programs to vulnerable households.

The outbreak of the Covid-19 pandemic has underscored the key role of governments in supporting the most vulnerable during times of crises. With the implementation of lockdown measures around the world, low-income populations have been disproportionately impacted by the resulting economic crisis, facing higher job losses, increased health risks, and reduced support services, with little or no resources to maintain their livelihoods.

Social protection programs, such as cash or food transfers, have been crucial for these groups to cope with the economic and health vulnerabilities caused by this health crisis. One of the main challenges associated with social assistance policies, however, is the issue of targeting—i.e. how to identify the individuals who most need this support?

In early 2020, even prior to the start of the Covid-19 pandemic, Chile was experiencing a serious economic crisis, which put strong pressure on the government to deal with issues of inequality and welfare improvements. The onset of the pandemic in mid-March led to additional economic and social challenges, such as increased unemployment and economic vulnerability resulting from lockdown measures. A survey by the UNDP and the Chilean government showed that, before the pandemic, 16.5 percent of households declared that their income was “not enough” to finance their expenses. By July 2020, this figure had increased to 48.8 percent of households.

The Chilean government decided to respond to the crisis through a series of policies aimed at mitigating the negative impacts of Covid-19. The first wave of announced measures included cash transfers to the most vulnerable households (Bono de Emergencia Covid-19) who were already enrolled in social protection programs, as well as a series of policies aimed at supporting formal workers and small business owners.2

However, these policies did not include individuals who were not formally employed or previously registered in the government’s database of beneficiaries (Registro Social de Hogares), which represented over 26 percent of the workforce in Chile by the second quarter of 2020. This became an important concern for the government, given that informal workers were particularly affected by the lockdown measures, as most of their activities and income came from working on the streets in close person-to-person contact. The government needed, therefore, to find the most effective way to identify and reach this population and provide them with the kind of support they needed.

Based on evidence from randomized evaluations, J-PAL affiliated researchers developed a cash transfer program proposal for the Chilean government.

At the start of the pandemic, the Minister of Finance reached out directly to J-PAL LAC’s Co-Scientific Director, Francisco Gallego, for advice on how best to provide economic support to vulnerable households during the Covid-19 pandemic. Specifically, they sought out evidence to help solve the following challenges:

To respond to this request, Gallego created a working group composed of Chilean economists and policy experts from the Pontificia Universidad Católica de Chile (PUC Chile), including J-PAL affiliate Claudia Martinez.3 Simultaneously, J-PAL LAC prepared two evidence briefs on the impacts of different social protection programs. These materials were first shared by Gallego with the Minister in a series of meetings, and then included as an appendix in the final program proposal presented by the group of experts to the government.

The evidence briefs included a review of 24 randomized evaluations (twenty of which had been conducted by J-PAL affiliates) looking at the effectiveness of different types of transfers, delivery schemes, durations, amounts, and conditionality. The brief highlighted the importance of unconditional monetary transfers to provide households with greater flexibility on their consumption decisions, allowing them to spend according to what they themselves identify as the most pressing needs.4 5 The evidence also suggested that, given social distancing measures, mobile transfers could be most effective in addressing logistical challenges for program implementation.6

Another important discussion focused on the relative effectiveness of different targeting strategies, such as identifying eligible people through administrative data, self-targeting, or community-targeting.7 8 9 Finally, the evidence highlighted the importance of providing the public with clear information on the benefits of social protection programs to improve program delivery and empower households to receive the benefits to which they are entitled.10 Overall, the evidence pointed to the potential of cash transfers to reduce poverty,11 improve educational outcomes,12 13 14 and increase access to health services.15 16 17

In parallel, Gallego and Martínez were also involved in a series of conversations around government spending and economic response to contain the virus. As part of different advisory commissions, both affiliates provided technical support to help policymakers design a fiscal plan that would reserve enough resources for a social protection program in the long-term. These inputs were essential to help accelerate the political process and guarantee a timely implementation of the program.

Informed by recommendations from J-PAL affiliated researchers and staff, the Government of Chile designed and implemented a social protection program to improve economic welfare for households adversely affected by Covid-19.

In May 2020, the Chilean government created the Ingreso Familiar de Emergencia (IFE) cash transfer program, built off evidence and advice shared by the expert working group. The law was approved on May 16, 2020 (full text here) and the first transfer was initiated on May 29. Households that received informal income were eligible to receive the transfer for a maximum of six months, with the last two transfers reduced by 70 percent and 55 percent, respectively. The amount of the transfer depends on the size of the household, with households receiving 100,000 Chilean pesos (US$136) per member for up to four members, and declining gradually after the fifth member.

The guidance provided by the working group, with support from J-PAL LAC, helped in defining and identifying the target population, as well as in selecting the amount and duration of the transfers. As recommended in the proposal, IFE focused on delivering assistance to the 60 percent most vulnerable households with informal incomes and used administrative data from the Registro Social de Hogares to identify eligible households. The program also includes a mechanism to allow potential beneficiaries not identified through administrative data to apply individually and have their cases assessed—a measure that the proposal identified as necessary due to the imperfect nature of the existing administrative data.4 Finally, as advised in the proposal, the government chose to roll out the transfer using electronic payments and direct deposits to bank accounts of beneficiaries, avoiding creating crowds in banks or other offices.

Chile needed urgent responses to support families and subsidize employment associated with the pandemic. This required great agility and inventing, in the broadest sense of the word, policy designs that we were not used to. Not only was there an intellectual, theoretical and applied contribution of high level, but Francisco Gallego and J-PAL were able to summon the best minds of the PUC-Chile, who, with great commitment and systematic support, gave strength and confidence to what we were doing. I am sincerely grateful for the opportunity and for this work since I believe that this is how public policies are built, in a collaborative way.

This experience highlights how evidence from randomized evaluations, combined with knowledge and understanding of the local context, can play a powerful role in informing governments’ decisions around the design of social protection programs. According to the World Bank, social protection programs like IFE helped mitigate some of the effects of the economic crisis caused by Covid-19. Prior to the pandemic, 3.3 percent of Chileans were living below the poverty line (less than US$5.50 per day). Despite grim early predictions that the pandemic would drive nearly one million Chileans into extreme poverty, the social assistance measures implemented by the government helped to keep Chile’s poverty rate nearly unchanged.

Maluccio, J. A. 2007. “The Impact of Conditional Cash Transfers in Nicaragua on Consumption, Productive Investments, and Labor Allocation.” ESA Working Paper No. 07-11.