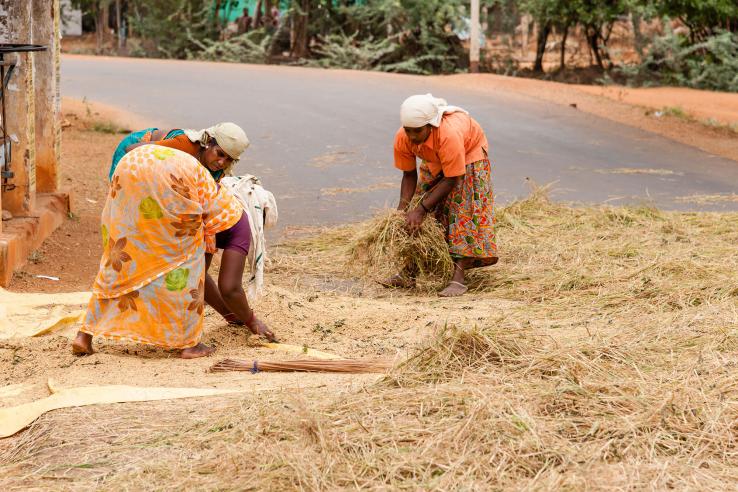 With over 70 million beneficiaries in 2016, the MGNREGS is the largest social protection program in the world today. Photo: Cornfield | Shutterstock.com

India’s largest social protection program, the Mahatma Gandhi National Rural Employment Guarantee Scheme (MGNREGS), guarantees households 100 days of work per year, typically in unskilled manual labor on infrastructure projects. Funds for this workfare program were originally disbursed by the central government to local governments based on projected spending, a process that created extensive delays and leakages. In the state of Bihar, J-PAL affiliates Abhijit Banerjee (MIT), Esther Duflo (MIT), Clément Imbert (University of Warwick), and Rohini Pande (Evidence for Policy Design, Harvard University), together with Santhosh Mathew, tested the impact of an information technology reform designed to address these concerns by linking the flow of funds to actual expenditures and reducing the number of officials involved in disbursement. The reform led to a 24 percent decline in expenditure without a detectable decline in employment or assets created, and there is direct evidence that at least part of the decline was due to reductions in fund leakage. Drawing on these results, India’s Union Cabinet approved a national reform of MGNREGS fund flow in 2015. The reform allows beneficiary payments across all Indian states to be made through a newly established electronic fund management system and has been adopted in 24 states.

MGNREGS funds were originally disbursed to local governments as advances based on projected spending amounts, rather than on the basis of actual expenditure. This fund-flow system generated opportunities for corruption by allowing a considerable gap between the receipt of funds and documentation of their use, creating increased opportunities for misuse of funds. Multiple layers of approval, introduced to increase accountability, were not effective in eliminating the potential for leakage: a 2011–2012 nationwide study estimated that at least 20 percent of official MGNREGS employment income was not accounted for in household surveys.1 In addition, multiple levels of approvals lead to funding delays or blockages at various levels of administration, and the advance payment system results in funds that sit idle and unutilized in some places, while other places may not have sufficient funds to run the program.

J-PAL affiliates and co-authors worked with the Bihar Department of Rural Development to evaluate the impact of an e-governance reform of the MGNREGS cash flow on corruption and overall program performance. The evaluation, conducted between September 2012 and March 2013, spanned twelve districts in Bihar, covering a rural population of 33 million. In each district, 69 blocks were randomly selected to implement the new fund-flow system and the remaining 126 comparison blocks kept the status quo.

The e-governance reform enhanced transparency by linking the flow of funds to actual expenditures. It also eliminated several steps involved in payments: by introducing a new National Electronic Fund Management System (Ne-FMS), funds flowed directly from the state government to village councils (called panchayats), which in turn paid the beneficiaries. Specifically, the reform required village-level officials to input the names of beneficiaries who had worked in the scheme and were owed wages into an online database. Submitting this information automatically released funds into the village council bank account. These changes were intended to reduce opportunities for leakage and eliminate “parked funds” at the district and village council level.

After a year under the new system, the evaluation found significant impacts along two key dimensions:

Influenced by the Bihar study, the Government of India asked all states to shift to a similar fund-flow system for MGNREGS wage payments.

On August 15th [2015], the Government of India’s Union Cabinet passed an order rolling out an improved version of the NREGA Bihar experiment across the country. That’s policy success number one. Policy success number two is that we believed … that if you save this amount of money in NREGA—there’s reduced corruption—if you actually implemented this across all government programming then the potential benefit is US$15 billion.

Coauthor Santhosh Mathew, an Indian Administrative Services officer, moved from Bihar to a senior post in the Government of India’s Ministry of Rural Development in 2013, marking an opportunity to leverage study findings nationwide. He collaborated with J-PAL affiliates to share the research results and emerging policy insights with key central government ministries. The J-PAL South Asia regional office supported these research translation efforts through a grant from the J-PAL Government Partnership Initiative.

The research and policy outreach informed the Union Cabinet’s approval for a national reform of the MGNREGS’s fund flow in August 2015, citing J-PAL’s work.2 Drawing on the success of the evaluated reform in Bihar, the new system approved by the cabinet allowed beneficiary payments across all Indian states to flow through Ne-FMS directly into beneficiaries’ bank accounts. To date, 24 states have adopted this new financial system for administering MGNREGS wage payments.

In addition, the study’s results have influenced the broader discourse on fund flow in government spending. For example, the 2015–2016 Economic Survey—the Ministry of Finance’s annual review of the economy—cited the study when advocating for large-scale, technology-enabled, and real-time direct benefit transfers in the delivery of government programs. In 2016, the Ministry of Finance also extended the use of the Public Financial Management System, which integrates expenditure-based fund-flow systems from the Bihar study into all centrally funded government programs.

Learn more about the research and policy influence from Abhijit Banerjee and Santhosh Mathew's presentation at a J-PAL co-hosted conference in 2016:

2 result(s)
From instincts to evidence: a policymaking journey
Transforming the digital payment infrastructure