Last updated:
Evidence from a randomized evaluation informed the scale-up of a pollution audit policy in Gujarat, India. 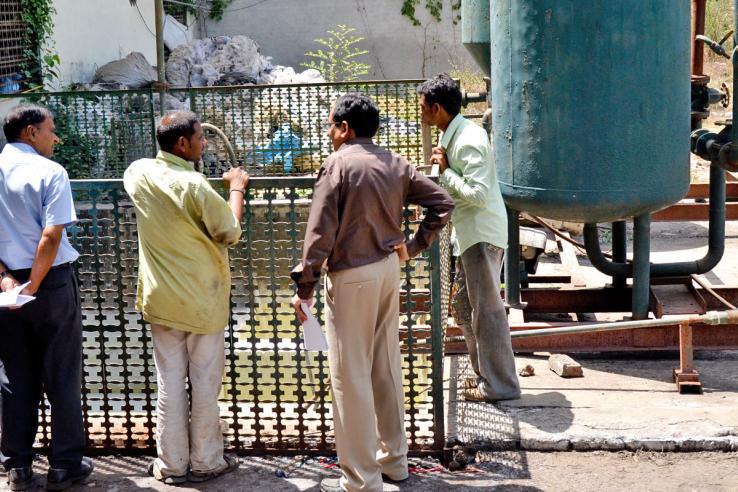 Research by J-PAL affiliates Esther Duflo (MIT), Michael Greenstone (University of Chicago), Rohini Pande (Evidence for Policy Design, Harvard University), and Nicholas Ryan (Yale University) has shown that making environmental auditors more independent improved the accuracy of pollution audit reports and led industrial plants in the Indian state of Gujarat to reduce their emissions. Based on the results of the randomized evaluation, the Gujarat Pollution Control Board (GPCB) reformed its environmental auditing system in 2015, issuing new guidelines that require random assignment of environmental auditors. Members of the research team continue to work closely with officials in Gujarat and other Indian states on environmental policy design and evaluation.

Rapid industrial growth in countries like China and India has greatly reduced poverty, but it has also led to severe air and water pollution, resulting in shorter and sicker lives for millions of people. The World Health Organization estimated that in 2016, urban air pollution caused 4.2 million deaths worldwide, most of which were in low- and middle-income countries.1

To curb pollution, regulators need to know which plants are polluting most. One way to monitor industry compliance with environmental regulations is through third-party auditors. However, in most countries, auditors are managed and paid by the company they are auditing, creating a conflict of interest. In these systems, auditors may distort or falsify their reporting to maintain good relationships with the companies they audit. Furthermore, if auditors do not report the truth, there is no reason for the plants to comply since regulators will not know if they fail to meet pollution limits.

In 1996, the Indian state of Gujarat sought to strengthen its environmental regulatory framework by introducing the first third-party environmental audit system in India. The initial system, however, was thought to produce unreliable information about pollution. Recognizing this problem, GPCB sought out researchers to help reform the audit market in 2009.

Changing auditors’ incentives made them more likely to report the truth about pollution levels at industrial plants. In response, the plants polluted less.

J-PAL affiliated researchers collaborated with GPCB to design and evaluate a set of reforms in which auditors were randomly assigned to industrial plants, paid from a common pool, monitored for accuracy, and paid a bonus for accurate reports. Industrial firms in Ahmedabad and Surat, the two largest cities in Gujarat, were randomly assigned to participate in the new audit system.

The results were striking: under the new system, auditors were 80 percent less likely to submit a false pollution reading. In response to more accurate audits, industrial plants reduced emissions of air and water pollutants by 28 percent and this effect was driven by the highest-polluting plants.

For more about this research, read the evaluation summary.

The state is at the forefront of testing and implementing innovative policies that actually work, which is why we wanted to partner with this team of researchers. The visionary leadership of the state coupled with the strong evidence generated through the research has been a guiding force for implementing new ideas in our march towards sustainable development.

GPCB’s commitment to testing various reform options ensured that the right policies could be effectively implemented and scaled.

Informed by the results of the evaluation, the GPCB is integrating the tested reforms into its strategy and expanding them across the state. To implement the new reforms, GPCB worked with programmers to develop a new software system that tracks and manages all interactions between GPCB and polluting industrial plants. The new software automatically randomly assigns auditors to firms so that neither the auditors nor the regulators have discretion regarding who audits a particular firm. This component was rolled out across the state in March 2015.

Building on this successful partnership, members of the research team are continuing to work closely with officials in Gujarat and other Indian states on environmental policy design and evaluation. In Maharashtra, they have partnered with the Maharashtra Pollution Control Board to evaluate whether providing regulators and the public with more information about industrial plants’ pollutions emissions increases regulatory compliance and reduces pollution. In Gujarat, a team of researchers is currently working with the Central Pollution Control Board and State Pollution Control Boards to test the effectiveness of real-time emissions monitoring systems on improving the effectiveness of industrial pollution regulation.

2 result(s)
Most industries in red zone for air pollution
From instincts to evidence: a policymaking journey