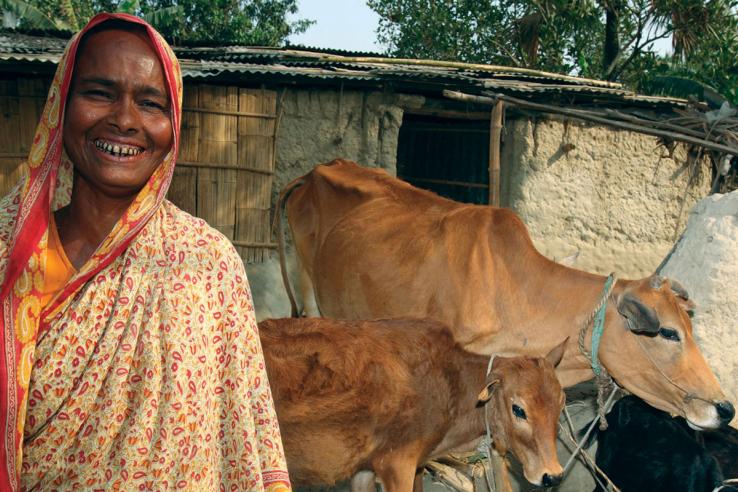 The Bangladeshi organization BRAC designed a multifaceted livelihood program—known as the “Graduation approach”—which provides ultra-poor households with a productive asset, training, coaching, access to savings, and consumption support to help them graduate from extreme poverty. The program has since been replicated by several implementing organizations across the world. Research by J-PAL affiliates found that the model led to large and lasting improvements in consumption, food security, asset holdings, savings, and in some contexts, improved psychosocial well-being. The approach has been scaled up by BRAC to reach over 2.1 million households in Bangladesh, as well as an additional 1.1 million households in 14 other countries.

According to the most recent estimates from 2017, 9 percent of the world’s population lives on less than US$1.90 per day, the World Bank international poverty line.1 Many of these families depend on insecure and fragile livelihoods, including casual farming and domestic labor. Their income is often irregular or seasonal, putting laborers and their families at risk of hunger.

The first target of the Sustainable Development Goals is to eradicate extreme poverty for all people everywhere by 2030. Achieving this target will require the poorest of the poor to shift to more secure and sustainable livelihoods. Self-employment is often the only viable alternative to menial labor for the ultra-poor. Yet many lack the necessary cash or skills to start a viable business. To alleviate these constraints, many international and local NGOs have introduced multifaceted programs that foster a sustainable transition to more secure livelihoods.

Originally developed in 2002 by the Bangladeshi nonprofit organization BRAC, the Graduation approach combines six complementary interventions into a comprehensive livelihoods program for poor women. Implemented over two years, the program provides a big push to help those living in ultra-poverty transition to more secure livelihoods. The six components of the program are:

BRAC was interested in working with researchers to evaluate the model’s impact at scale and compare the results to an earlier impact evaluation led by an internal team of BRAC researchers. To do so, they partnered with J-PAL affiliates Oriana Bandiera (London School of Economics), Robin Burgess (London School of Economics), Selim Gulesci (Trinity College Dublin), and Imran Rasul (University College London), together with Narayan Das, Munshi Sulaiman, and Raniya Shams, to conduct a randomized evaluation beginning in 2007, when the program was scheduled to expand to 270,000 new recipients. Researchers found the program enabled the poorest women to shift out of farm labor and into running small businesses, increasing their earnings by an average of 38 percent four years after the productive asset transfer. Evidence from this rigorous evaluation helped BRAC generate support to scale up the Graduation approach in Bangladesh and other parts of the world. Additional surveys conducted in 2018 showed that women who received the asset transfer were more likely to be self-employed, own assets, earn more, and consume more eleven years after the original transfer.

Bandhan, the nonprofit arm of the financial institution Bandhan Bank, adapted the model in West Bengal, India beginning in 2007. This adaptation was evaluated by J-PAL affiliates Abhijit Banerjee (MIT), Raghabendra Chattopadhyay (Indian Institute of Management), and Esther Duflo (MIT), with Jeremy Shapiro. They found that, in India, Graduation households experienced a five-fold increase in livestock revenue relative to comparison group households and were more likely to report having enough food to eat. Participating households had higher incomes, consumption, food security, and better health relative to households that did not receive the asset transfer ten years after the program ended. Women who received the program were more likely to shift from farm to nonfarm labor in the long run and were likely to migrate longer and to farther, wealthier cities, earning 30 percent more in wages than those who did not receive the program.

Across a diverse set of contexts and implementing partners, this cost-effective program has led to large and lasting impacts on ultra-poor households’ standard of living. For more information on the research, see the Policy Bulletin summarizing different evaluations of the Graduation approach in Bangladesh, Ethiopia, Ghana, Honduras, India, Pakistan, and Peru.

The randomized evaluation led by Bandiera and co-authors generated rigorous evidence of the model’s effectiveness and spurred BRAC to consider how the model could be further adapted.

In India, evidence generated from the randomized evaluation and subsequent policy outreach by J-PAL South Asia assisted Bandhan to expand the model beyond West Bengal. Pilots have been completed in Rajasthan and Jharkhand, and Bandhan is continuing to implement rollouts in other parts of India.  From 2012 to 2022, Bandhan has reached nearly 167,000 ultra-poor households across thirteen states in the country including - Assam,  Bihar,  Chhattisgarh, Jharkhand, Madhya Pradesh, Maharashtra, Odisha, Rajasthan, Telangana, Tripura, Uttar Pradesh, Uttarakhand, and West Bengal.

In 2017, the state government of Bihar began piloting a program to adopt the Graduation approach, to be implemented by the state agency Jeevika with technical assistance from Bandhan. The Bihar government subsequently announced plans to adopt the Graduation approach in its Satat Jeevikoparjan Yojana (Sustainable Livelihoods Program), with the goal of extending the state’s previous economic inclusion efforts to 200,000 of the poorest households across Bihar between 2018 and 2023. Satat Jeevikoparjan Yojana (SJY) is the first large-scale government adaptation of the graduation approach.

In 2019, Jeevika was named as one of the inaugural grantees of Co-Impact’s systems change grants for their work to scale the graduation approach as part of SJY. J-PAL South Asia has assumed an operational research role to help ensure effective real-time learning of operational lessons over the course of the SJY scale-up. J-PAL affiliates Banerjee and Duflo, as well as Shagun Sabarwal and Jyoti Mukhopadhyay, are currently working with Jeevika to monitor and evaluate the impact of the large-scale implementation of SJY.  As of September 2022, SJY had reached more than 147,000 households in Bihar across all 38 districts in the state, and 25,000 households have graduated from the program.

The results from high-quality research are spurring international interest in further innovation. J-PAL affiliates and other researchers have launched evaluations of the next generation of the program to better understand how to optimize the model’s components in different settings. For example, J-PAL affiliates Adam Osman (University of Illinois Urbana Champaign) and William Parienté (Université Catholique de Louvain), with Ragui Assaad and Christine Valente, are partnering with BRAC, the Sawiris Foundation for Social Development and two Egyptian NGOs—Giving Without Limit Association in Assiut and Human Development Egyptian Association in Sohag— to evaluate the impact of the Graduation approach in Egypt with support from J-PAL MENA. Egypt’s Bab Amal graduation program has been implemented across Sohag and Assuit governorates in Upper Egypt, spanning 35 different villages and involving 2267 families. The evaluation compares the full Graduation program with a lower-cost version, as well as a version specifically targeting women, to help policymakers determine the most cost-effective way to scale the program. The results of the evaluation may inform how the Egyptian government will think about future social assistance programming as part of the Egypt Impact Lab.

Graduation programs in other contexts have expanded to cover other key social protection and empowerment interventions. In Ghana, research has shown that participating in cognitive therapy (CBT) as part of a Graduation program improved rural households’ health, cognitive and socioemotional skills, and economic outcomes. Ongoing evaluations in Burkina Faso, Mauritania, Niger, Senegal, and Uganda are testing which variations of the graduation approach are most effective when implemented as part of a government safety net and when implemented in and around a refugee settlement, respectively.