Women often face opposition from their families to participate in the workforce, due to concerns regarding safety, childcare responsibilities, and cultural gender norms surrounding women working. In partnership with an employer in rural India, researchers developed two light-touch interventions (an orientation video for families, and a guided conversation between women and their families) that aimed to shift gender norms related to women’s work and increase labor force participation. Researchers did not find meaningful changes in support of women’s work nor in rates of employment among women that received these interventions.

Globally, women participate in the workforce at much lower rates than men. In 2017, women were 35% less likely than men to be employed or looking for work outside of the home.1 Those who might want to participate in the labor force may face opposition from their families due to: safety concerns in both commuting to a job and at the job site itself; childcare responsibilities; and cultural gender norms that cause families to worry about stigma in the community surrounding women working.

Beyond being a gender equity concern, restrictive gender attitudes and norms are costly for firms. For example, high turnover due to families’ negative attitudes to women working outside of the home, or opposition to women travelling outside of the village for work or travel, results in costly recruitment and training for firms that depend heavily on female employees.

Given the financial constraints that firms face due to restrictive gender norms, employers may be inclined to provide low-intensity interventions to change attitudes towards women in the workplace. Can these types of interventions make a difference in families’ attitudes towards female employment? Furthermore, do changes in attitude result in increased women’s labor market participation?

Women in India have some of the lowest rates of labor force participation in the world, at only 21 percent in 2018 according to the International Labour Organization.2 Restrictive gender norms surrounding employment seem to be an important factor. A majority of Indian men (63 percent), and almost half of Indian women (48 percent), agree with the statement that when jobs are scarce, men should have more right to a job than women.3 These views are much less common in the United States, where women have much higher rates of labor force participation (56.2 percent in 2017).4

Social norms that restrict female employment are a challenge for firms that depend heavily on female employees in rural India. One such firm is Hippocampus Learning Centers (HLC), a private kindergarten provider that operates over 200 kindergarten centers across the state of Karnataka. HLC faces a high rate of teacher turnover: in 2016, 33 percent of HLC’s teachers departed the organization. The majority of HLC’s teachers are young women. The median age of the teachers in this study was 25; 57 percent were married and 49 percent had at least one child. 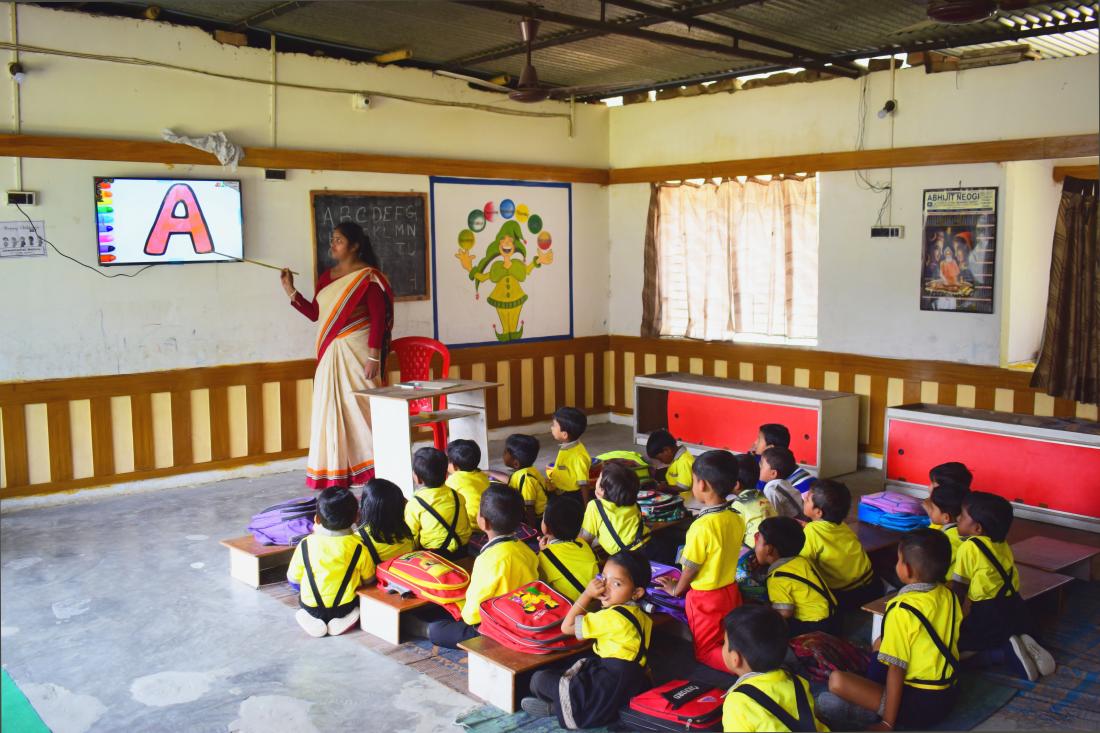 In partnership with HLC, researchers developed two interventions aimed at shifting gender norms related to women’s work. The interventions were designed to be low-cost and light-touch, adhering to practices that a firm in India could plausibly implement. Researchers sought to study whether these interventions could change attitudes around female employment and empowerment, as well as the employment status of women.

Researchers recruited female teachers, and asked them to identify a man, and if possible, a woman in their household who had the greatest influence in their decision to work. This resulted in a final sample of 171 teachers, 171 male family members, and 124 female family members. Teachers and their family members were randomly assigned to receive one, both, or none of the following interventions:

Video Intervention: The researchers designed two videos to share with teachers and their families to increase family members’ support for women working. One video covered the non-financial benefits to employment, such as personal growth. The second addressed common concerns that families may have about work outside of the home. The videos featured testimonials from both employees and their family members and were designed to be incorporated into recruitment and training materials. Half of the families that were shown the videos saw both videos, and the other half saw only the benefits of employment video.

Conversation intervention: The second intervention was a prompted, guided conversation between women teachers and their families about the pros and cons of the teacher working. These conversations were designed with the aim of correcting misperceptions on the benefits and risks of employment that family members may hold.

Researchers implemented the program in November 2017 and conducted surveys a year later, in December 2018, to measure changes in employment generally and at the learning centers. They also measured attitudes among both teachers and family members towards female employment and empowerment.

Neither intervention increased teachers’ and family members’ support for female employment and empowerment. Likewise, women in the program and comparison groups did not have meaningful differences in employment rates. While the lack of impacts on employment or measures of empowerment could be due to the small sample size of this study, these results cast doubts on the ability of light-touch, employer-led interventions to change gender norms.

Shifting gender norms might require more sustained, community-level action. Nonetheless, firms could consider joint investments in longer-term interventions to shift gender norms, similar to those of US-based firms that have promoted female employment in the STEM sector. It is also possible that the most effective way these firms can shift norms is simply by providing employment opportunities for women in areas with low female labor force participation. Women working outside of the home may act as role models to destigmatize employment, or they may learn through employment itself that it may be compatible with a positive family life.