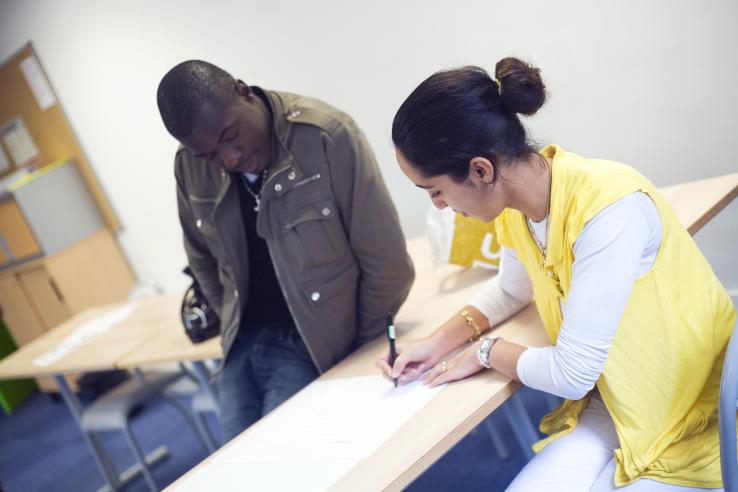 On March 26, J-PAL Europe, headquartered at the Paris School of Economics, launched the European Social Inclusion Initiative—a new research and policy initiative aiming to generate and disseminate lessons on which programs can help foster the inclusion of migrants and refugees in Europe. More than 200 leading researchers and representatives of governments, NGOs, foundations, and corporations from across Europe, as well as international organizations, gathered in Paris, France, for the launch event.

“In Europe, over 118 million people, or about 24 percent of the population, live at risk of poverty or social exclusion,” explained Anna Schrimpf, J-PAL Europe Co-Executive Director, in her opening remarks.

Next, J-PAL co-founder and director, Esther Duflo, delivered the keynote lecture, discussing some of the main questions regarding social inclusion in Europe and highlighting the need for rigorous impact evaluation to better understand social inclusion programs.

“Social policy faces a fundamental tension between inclusion and exclusion,” said Duflo as she discussed the importance of making social programs more inclusive in their design and taking efforts to target people who face the greatest difficulties.

During the second half of the conference, participants heard from a panel of researchers and practitioners in Europe on why we need to know more on the inclusion of migrants and refugees. Panel speakers included Judith Aquien (Déléguée Générale at Action Emploi Réfugiés), Sheree Bennett (Research and Evidence Advisor at the International Rescue Committee Deutschland), Karim Bin-Humam (Director of Operations at Skilllab), and Marc Gurgand (J-PAL Europe Scientific Director). The panel was moderated by Ilf Bencheikh, J-PAL Europe Deputy Director. Panelists shared from their experiences and discussed the main priorities and challenges for fostering the social inclusion of migrants and refugees in Europe.

"Social inclusion of migrants and refugees remains an under-researched topic," mentioned Gurgand in his presentation of the recently-published literature review of existing evidence on social inclusion programs.

ESII is a multi-year research and policy outreach initiative, with the first round of Requests for Proposals to be announced in May this year. The initiative is run with the support of and in collaboration with Community Jameel and Porticus.

For upcoming information on ESII and to learn more on how to become a partner, visit povertyactionlab.org/esii.