Prices for agricultural goods typically increase after the harvest season. However, farmers often lack storage facilities to preserve their agricultural products and do not take advantage of these price fluctuations. Researchers tested the effect of an inventory credit program that provided storage facilities and loans on palm oil farmers’ agricultural activities in Sierra Leone. Take-up and use of the storage and loans was low, and there was no impact on total storage or timing of sales.

Prices for agricultural goods can vary widely from the harvest season—when supplies are abundant and prices drop—to other times of the year–when supplies are scarce and prices go up. Small-scale farmers often lack proper storage facilities to take advantage of these price fluctuations. As a result, they may get stuck in a “sell low, buy high” trap, in which they sell outputs at lower prices after harvest and then need to buy the same products later, when prices are higher. Can access to storage facilities help farmers benefit from price fluctuations and increase revenues? Researchers examined the impact of a storage rehabilitation program and inventory credit on palm oil farmers’ agricultural activities in Sierra Leone.

In Sierra Leone, agriculture comprises 60 percent of the nation’s Gross Domestic Product.1 Palm oil is one of the main cash crops. Farmers in Sierra Leone tend to sell most of the palm oil during harvest season (March to June) or the rainy season (July to September). Usually, more than 80 percent of their production has been used or sold by the end of the rainy season. Yet, prices sometimes increase by more than 50 percent at the end of the calendar year, representing a lost opportunity for farmers to increase their incomes.

The Ministry of Agriculture’s National Program Coordinating Unit (NPCU) piloted a palm oil inventory credit program in collaboration with three Rural and Agricultural Banks (RABs). Of the farmers participating in the program, more than 92 percent relied on farming as their main source of income, and palm oil was the most important sale crop for 72 percent of households. More than 45 percent belonged to female-headed households. Finally, target communities did not rely much in formal banking institutions: only 3% of the respondents had borrowed from a commercial bank, while the share of community bank loans was at 12 percent. Instead, local lenders and friends played an important role in securing loans. 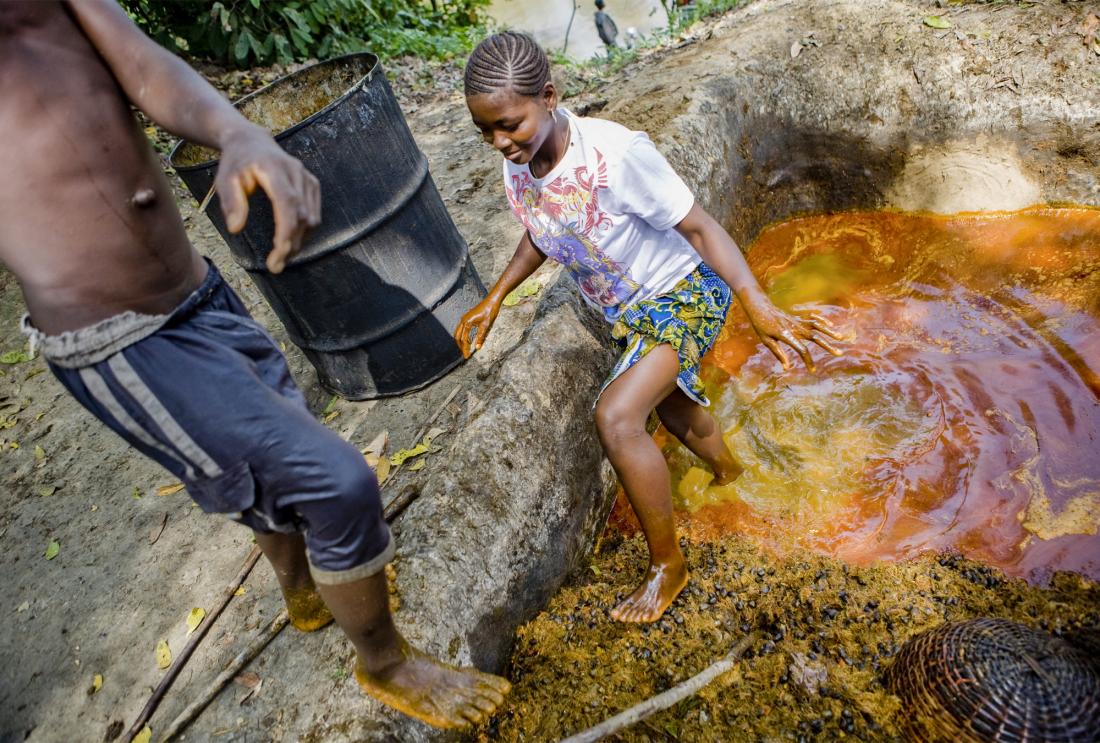 In partnership with NPCU and three RABs, researchers randomly assigned 120 palm oil producing villages to one of two intervention groups, which aimed to help farmers sell palm oil when prices were high, or a comparison group:

1) Comparison group: Starting just before the harvest season in February 2011, two program officers conducted two information visits in each of 40 villages. They discussed the patterns of seasonal fluctuations in palm oil prices and introduced the possibility of storing palm oil to take advantage of these fluctuations.

2) Storage support group: In addition to the information visits that the comparison group received, 40 villages also received support for rehabilitation of community palm-oil storage facilities, including repairing doors, windows, leaking roofs, and locks. The rehabilitation costed less than US$30 per community. The communities and NPCU jointly managed the storage facilities. These villages also received additional storage containers and marketing support for selling oil in the high-price season.

3) Inventory credit group: In addition to the information visits and storage support, farmers in 40 villages were offered loans from the RABs. Farmers had the option to take out loans worth up to 70 percent of the palm oil’s assessed value during the harvest at a 22 percent interest rate. The banks stored the palm oil as collateral. Sales and loan repayment began at the end of the rainy season in September 2011.

To measure the impact of the storage support and loan offers, researchers surveyed 1,858 households across the 120 villages four times over the year about their palm oil related activities, access to credit and savings, and sale prices and price expectations. At the end of the year, researchers conducted focus groups in twelve communities to gather in-depth information followed by the final survey. Researchers also had access to administrative data from NPCU and the RABs, which included information on intervention take-up, storage behavior, and the terms of sale and loan repayment of the stored oil.

Take-up and use of the storage and loans was low, and there was no impact on total storage or timing of sales.

Take-up and use: Take-up of both the storage facilities and inventory credit was low, with 29.9 percent of households storing their crops and 24.9 percent using the inventory credit. Across both interventions, approximately 10 percent of the 2010 baseline levels of palm oil was stored in the new facilities – 0.92 palm-oil containers per household in the inventory intervention and 1.55 per household in the storage intervention, from an average production of 11.57 containers. Large palm-oil producers were more likely to use the storage or credit program, likely because they were better able to take on the potential risks of trying new services.

Relationships with traders and a lack of relationships with banks drove low take-up. Palm oil traders that historically provided credit, input, and storage containers to farmers believed the storage and credit products were affecting their profits. As such, traders attempted to discourage farmers from using the storage facilities or taking out loans. Farmers may have ultimately decided to maintain relationships with the traders rather than experiment with new products. In addition, low take-up of the inventory credit product could be partly explained by a lack of trust in banks, high interest rates, and delays in delivering the storage containers. Because of the low take-up, the inventory credit product was not profitable for the banks.

Storage and sales decisions: Neither intervention changed the total amount of palm oil storage, the timing of sales, or investment decisions. Across both intervention groups, the community storage space tended to serve as a substitute for other forms of storage (i.e. households’ own room or storage space). As such, neither intervention increased the amount of palm oil being stored. In addition, the farmers did not change their timeline for selling the palm oil (i.e. selling more at the end of the year); nor did they make different investment or planting decisions.

While over one year the rehabilitation assistance and loan offers did not impact storage, it is possible that the products could have a greater impact over a longer time period. For example, if farmers gain trust in banks or push back on trade relationships, these changes could lead to greater use of storage. More research is needed to better understand how to improve farmers’ revenues in the context of existing trade networks, financial systems, and agricultural constraints.