Approaches to teaching that promote rote-learning and one-way flow of information from teachers to students are suspected to limit student learning. Researchers, in partnership with Kimanya Ngeyo Foundation for Science and Education in Uganda, evaluated the impact of a program that trained teachers to learn like scientists: posing questions, framing hypotheses, and using real-world experience wherever possible. They explored how this approach to training teachers changes classroom dynamics, teacher pedagogy, student learning, and creativity. Researchers found positive impacts along all these dimensions.

Despite rapid gains in school attendance over recent decades, large learning gaps often persist. In many countries, strict teaching styles and fixed curricula that do not respond to student interests may be stunting learning. Across low- and middle-income countries around the world, governments spend significant resources on teacher training in an effort to improve student learning, but evidence on best practices for teacher training programs is low. Furthermore, many pedagogy or teacher training programs that have been widely successful focus on building discrete skills or following a specific curriculum, often for young children. Especially when teaching adolescents who are expected to learn much more material and develop increasingly complex competencies, a broad-based change in teachers’ instructional capability may equip students with transferable skills like finding answers themselves across diverse applications and contexts. Is it reasonable, however, to expect teachers to change modes of instruction if they have seldom experienced alternative instructional modalities themselves? Might teachers benefit from first learning how to learn in a scientific, interactive, and inquisitive manner themselves? If so, does this translate to them applying insights to their own teaching, fostering a more interactive learning environment for their students?

In 1997, Uganda implemented free universal primary education. Yet by 2016, while close to 100 percent of primary age students in Uganda were enrolled in primary school, only 35 percent of students who started primary in the 2000s qualified for the last grade of primary school. Additionally, only 59 percent of Ugandan primary school graduates continued onto lower secondary school. Furthermore, even after reaching the last year of primary school, 30 percent of students could not read and understand a story in English, the primary language of instruction. This learning lag is pronounced in Budondo sub-county, where the intervention is focused. For instance, in Grade 1, some students are as old as 10, while in Grade 7 some students are as old as 18, indicating significant grade repetition and slow learning.

Schools in Budondo sub-county that were included in the study employed 13.2 teachers on average. Only 24 percent of these teachers had post-secondary degrees, and 20 percent had taken part in training programs during their time as teachers prior to the intervention. These teachers generally had a wide range of responsibilities, with 43 percent teaching Grade 6 and Grade 7 in addition to other classes. Schools had 520 students on average, with a student-teacher ratio of 38.2.  Additionally, prior to the intervention, many teachers in the study used corporal punishment against their students, often responded negatively to student questions, and frequently did not tolerate student disagreement, all of which may limit student learning.

Kimanya Ngeyo (KN), a Ugandan NGO that trains teachers by reorienting their attitudes towards the role of knowledge in society, has been active since 2007. KN often conducts its trainings using carefully selected modules from the Preparation for Social Action (PSA) Program, which has been consistently refined and offered in some form since the mid-1970s,  to prepare teachers to integrate scientific approaches to learning with social action in communities by developing capabilities in four areas: language, mathematics, science, and process of community life (such as production on small farms, maintaining health, waste management, environmental issues and more). 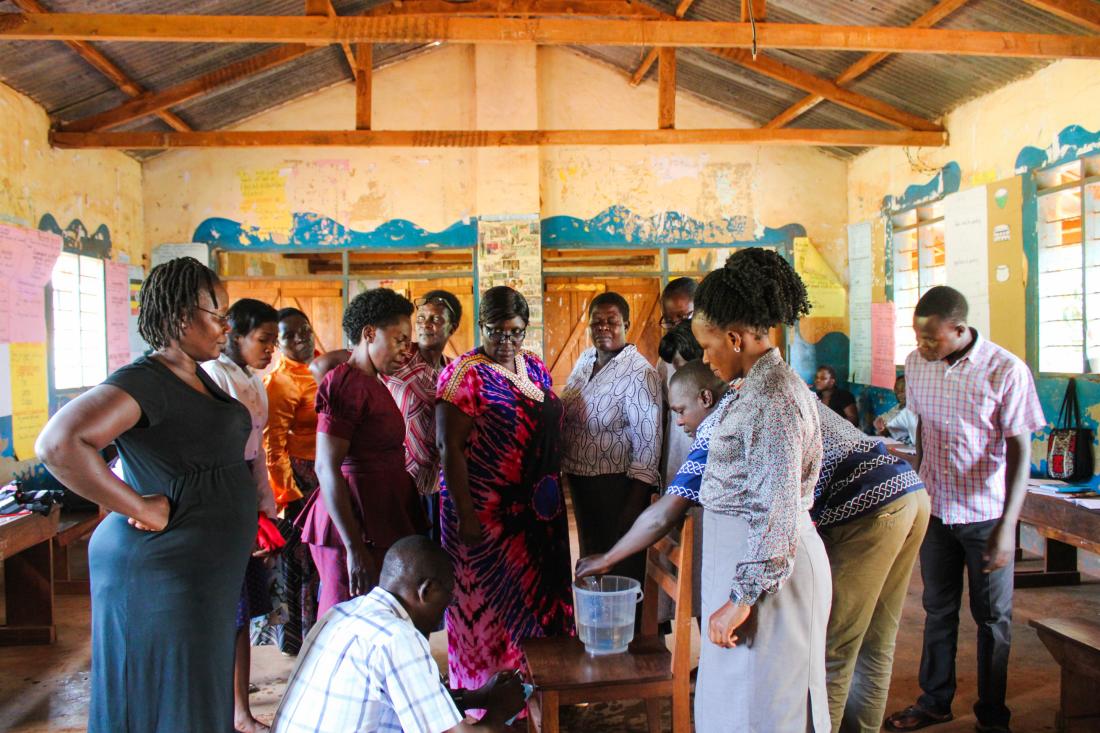 Primary school teachers use local materials to learn about measuring pressure inside a gas or liquid.
Photo: Aida Namukose

Researchers partnered with KN to conduct a randomized evaluation to test the impact of PSA on teacher motivation and student learning in Uganda.

As part of the year-long in-service training using materials from the PSA program, teachers underwent three two-week trainings during term breaks, and KN tutors visited teachers approximately once per month to observe their classroom behavior.

During in-person trainings, teachers engaged in practical exercises that help link academic readings with everyday experiences. These trainings were often jarring for teachers who were used to being passive recipients of lectures; through PSA, in contrast, teachers were asked to describe shapes they molded out of clay to one another, reflect on the generation of language and knowledge, discuss their own attitudes on the purpose of education, and correlate and contrast these attitudes with educational design principles embedded in the PSA texts. These exercises were all geared to helping teachers think and act more consciously about instruction strategies that facilitate discovery and curiosity in their students. Among other hypotheses, the expectation is that trained teachers make learning a more collaborative, exploratory and iterative process.

Thirty-five primary schools in the Budondo sub-county participated in the study. Researchers randomly divided these schools into the following two groups:

Researchers measured outcomes at the teacher, student (including student group activities), and classroom level within all Grade 6 classrooms at each school, as well some supplementary analyses in all Grade 4 to Grade 7 classrooms. Researchers conducted interviews with both teachers and students, asking teachers about their common practices and students about their experiences in the classroom, as well as measuring their critical thinking and creativity. Furthermore, researchers observed classroom sessions to measure student-teacher relations. Researchers also measured student scores on the Primary Leaving Exams (PLE), which are qualifying exams for secondary school. Lastly, researchers hosted science shows and measured students’ ability to design experiments, articulate hypotheses, measure observations, and communicate results. Researchers largely measured these outcomes in the second half of 2019, after the training of the first two cohorts of teachers.

Students in schools that were offered the PSA training had improved standardized exam scores and heightened measures of creativity and problem-solving following the training. Furthermore, observers perceived students to be more engaged in class and to be using a more inquisitive teaching style, and teachers correctly answered more questions about their students.

Traditional learning outcomes: Students who attended a school invited to participate in the training performed better on the PLE in English, Science, and Social Studies (though not math—one subject area not covered by the PSA training). These students were 24 percentage points (47 percent) more likely to pass the PLE examination, and students in Grade 6 were 12 percentage points (15 percent) more likely to transition to Grade 7 relative to their peers in the comparison group. These changes were associated with an average gain of 0.59 years of additional schooling—5.5 percent more schooling than the average student in the comparison group had attained.

Critical thinking and creativity: In surveys that researchers gave to students, those in classrooms at schools invited to participate in the training scored higher on questions measuring applied understanding (by 0.73 standard deviations) and critical thinking (by 0.45 standard deviations) relative to the comparison group. Furthermore, in science shows, students in the training schools scored higher on designing experiments, articulating and analyzing hypotheses, measuring observations, and communicating results by at least 30 percent.

Teacher pedagogy and effort: Outside observers measured that a larger proportion of students were engaged in the classroom in training schools relative to the comparison group, where an average of about half of the students were engaged. These observations were borne out in teacher and student surveys: In schools in the training group, 28 percent of students reported asking questions in class when they did not understand a concept relative to 22 percent in the comparison group, though they reported no change in experiencing corporal punishment. Additionally, teachers in the training group were 10 percentage points (16 percent) more likely to recall their students’ attendance and living conditions, suggesting greater knowledge of their students, and were 10 percentage points (12 percent) more likely to respond inquisitively, rather than dismissively, when a student asked them a question that they didn’t know the answer to. Teachers in training schools were also more likely to report learning from their students and responding gently to misbehavior than colleagues in the comparison group. Lastly, teachers in training schools were 9 percentage points (15 percent) more likely to report forming a learning relationship with their colleague relative to a comparison school mean of 60 percent.

Researchers suggest that teachers who received the training became more inquisitive about their students’ living circumstances or the root causes of their limited academic engagement or poor performance, creating an environment in class in which students asked more questions, and increasing the degree to which they learned from their colleagues. Furthermore, the trainings were cost-effective; researchers estimated that the intervention produced an additional 9.62 years of high-quality education per US$100 spent, ranking it in the top 5 percent of interventions analyzed along this metric.

The researchers are exploring opportunities to adapt the program through government systems. In particular, they are working with the Ugandan Ministry of Education to consider scaling the approach in a set of teacher training colleges. Additionally, ongoing research is exploring impacts of this study on community-level outcomes and whether a similar training model can be applied in other contexts ranging from secondary school to agricultural extension programs.