Numerous studies in education literature have researched the so-called Pygmalion effect, which prescribes that students perform better or worse simply because teachers expect them to do so. Yet little is known about the channels through which teachers formulate or transmit such expectations. Of particular concern is whether or not teachers systematically treat students differently based on observable characteristics, such as minority status or gender. This could have long-lasting consequences on the effectiveness of education and the future of these children by reinforcing erroneous beliefs of inferiority and discouraging certain children from making human capital investments. Discrimination in grading practices is one of the channels through which such inefficiencies could occur, and of particular importance given the salience of gateway exams in many countries. This study thus addresses the issue of grading discrimination on the basis of caste, gender and age.

In India, the Hindu religion traditionally divided groups into hereditary castes that denoted both a family’s place within the social hierarchy and their professional occupation. In order of prestige, these castes were the Brahmin, Kshatriya, Vaishya, and Shudra respectively denoting priests, warriors/nobility, traders/farmers and manual laborers. In principle, individuals are now free to choose occupations regardless of caste, but these historical distinctions have created inequities that exert powerful social and economic influences until this day. Given the large gap in family income and labor market opportunities between children from lower and high caste groups, it is not surprising that children from traditionally disadvantaged castes tend to have worse educational outcomes than those from more advantaged groups.

While it is difficult to identify the influence of caste separately from poverty and low socio-economic status, the potential for discrimination in schools is significant. Both urban and rural schools maintain detailed records of their students’ caste and religion, along with other demographic information such as age, gender, and information on their parents. Anecdotal evidence suggests that teachers may take this information into account. 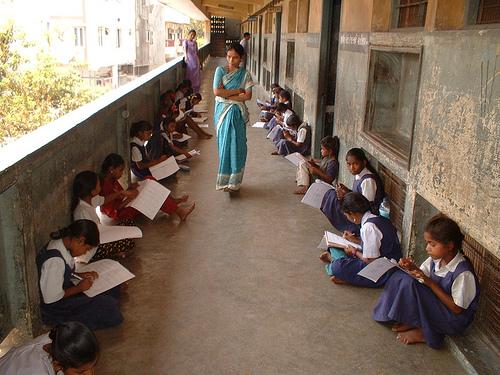 The current experiment aims to investigate discrimination by caste, gender and age. There are three main theories of discrimination that are explored in this paper. First, the researchers aim to distinguish between behaviors that are consistent with taste-based models of discrimination, in which teachers may have particular preferences for individuals of a particular group or with specific characteristics, and statistical discrimination, in which teachers may use observable characteristics to proxy for unobservable skills. Teachers may statistically discriminate if they are not confident about the testing instrument. In particular, teachers may be unsure as to what the final distribution of grades “should” look like, and therefore, they may not know how much partial credit to give per question. Thus, teachers may use the characteristics of a child, not as a signal of performance, but rather as a signal of where the child will end up in the distribution. Second, the researchers explore whether more discrimination occurs in subjective subjects. Finally, a test for the presence of in-group bias, i.e. positive bias toward members of one’s own group, is conducted.

In order to analyze the presence of these different forms of discrimination, an exam competition was implemented in which the researchers recruited children to compete for a large financial price (58 USD or 55.5 percent of the parents’ monthly income). Afterwards, each individual exam was randomly assigned child “characteristics” (age, gender, and caste) to its cover sheet. Since the “observed” characteristics of the child were randomly assigned, these characteristics would be uncorrelated with the exam grade if there were no discrimination. Thus, any correlation between the “observed” characteristics and exam scores is evidence of discrimination. Local teachers were recruited and provided with a set of exams. In this way, each exam was graded by an average of forty-three teachers.

Magnitude of Discrimination: On the whole, there is evidence of discrimination against lower caste children, but the magnitude of the effect is small. Teachers give exams that are assigned to “lower caste” scores that are about 0.03 to 0.09 standard deviations lower than exams that are assigned to “high caste.” Compared to the observed differences in student performance by caste, these effects are very small. On average, no effect of assigned gender or age on total test scores is prevalent; hence there is no evidence of discrimination by gender or age.

Nature of Discrimination: The study finds that grading order matters. The first exams that are being graded by the teachers exhibit a -0.22 standard deviations difference between the high and low caste exams. By the 25th exam, low castes are treated very much like high caste exams with a difference of only 0.042 standard deviations. Moreover, being graded in the first half of the packet implies a 0.10 standard deviation gap between the exams that were assigned to be female and male. These results suggest that teachers discriminate more at the start of the exam yet this effect fades over time.

Finally, evidence of in-group bias can, on average, not be detected either. In fact, the opposite is observed, with discrimination against the low caste children being driven by low caste teachers, and teachers from the high caste groups appearing not to discriminate at all (even when controlling for the education and age of teacher). However, the study does find some evidence that both groups of teachers are widening the distribution of scores, providing relatively lower scores to low quality, low caste exams and providing relatively higher scores to high quality, low caste exams.