Every year nearly two million children under five die from acute respiratory infections, the leading killer of young children.1 Epidemiological studies have identified environment hazards, such as indoor air pollution, as a key culprit for these infections. Indoor air pollution, which is mainly caused by the burning of wood, dung, and other biomass fuels within the household particularly affect women, who are primarily responsible for cooking, and young children who often spend time with their mothers. Despite the potentially devastating health consequences, it is not understood why vast numbers of rural households continue to use potentially harmful cooking practices when relatively cheap alternatives are available. It is possible that households are unaware of the health consequences of indoor air pollution, are unable to afford cleaner stoves or fuels, or are averse to adopting new cooking technologies, which may be less well suited to their customs or taste.

Ninety percent of households in rural Bangladesh use biomass fuels, which could adversely affect the health of inhabitants, for both cooking and heating.2 In 2008, 14 percent of deaths in children under-5 were a result of pneumonia.3 This study, which aims to reduce indoor air pollution, took place in two districts that varied both demographically and in their fuel needs. Hatia is an isolated island in the south of the country. The region is poor compared to the rest of Bangladesh, but has relatively easy access to fuel-wood. Jamalpur is a densely populated region in the north of the country, with very little access to fuel-wood, and instead use animal dung, and agriculture residues such as straw, rice husks, sugarcane refuse, and jute sticks. 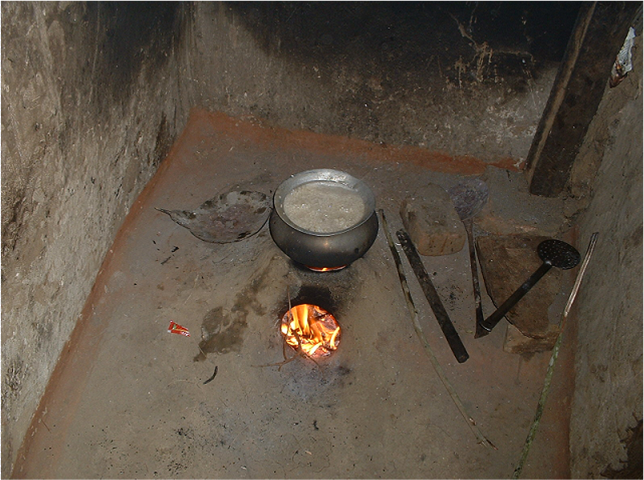 A traditional cookstove in Bangladesh.

In order to explore households' preferences, researchers designed two sets of overlapping experiments, both of which provided respondents an opportunity to purchase a nontraditional cookstove. In 2008, households in rural Bangladesh were randomly selected to receive basic health education about the harm of traditional cookstoves and the benefits of nontraditional cookstoves. Afterwards, they were given the opportunity to buy either an efficiency stove that improves fuel efficiency, or a chimney stove that reduces exposure to indoor smoke; the specific details of the offer varied by intervention group.

Each set of experiments was designed to evaluate the relative importance of two common explanations for the low adoption rates: (1) intrahousehold differences in preferences, and (2) lack of information from a trustworthy source about the new technology. For the first set of experiments, households were randomly assigned to one of the following intervention groups:

A team of two enumerators visited each household. While one enumerator interviewed the male household head, the other conducted a separate interview with his wife. After completing the survey, either the husband or wife (depending on the intervention group) was given the opportunity to purchase either type of nontraditional cookstove, but was not able to consult with his/her spouse before making the decision.

The second set of experiments tested a common social marketing strategy for disseminating credible information about a new technology. Specifically, it paired random variation in prices and stove type with information about the purchase decisions of village "opinion leaders." In selected village, within each distinct neighborhood, researchers identified three opinion leaders. These opinion leaders were the first to be offered stoves, and their adoption decisions were then announced in the village. The detailed breakdown of the intervention groups was as follows:

Roughly four months after the orders were placed, project staff returned to deliver the cookstoves. At that time, households could refuse to install or pay for the stove.

Preliminary Results
Price played an important role in the adoption decision. Offering stoves at the 50% subsidy increased adoption by over 200%. For those who initially declined the offer, the most common reason given was "too expensive." Adoption of the new stoves was far from universal even when they were free, which suggests that there are also important non-price factors affecting households’ decisions to adopt a new technology.

Women are more likely to accept an improved stove, and the health-saving chimney stove in particular compared to men, but women drop out at higher rates than men once any positive price is charged. Women thus exhibit a stronger preference for the health-saving stove, but find it difficult to act on those preferences under the more stringent liquidity constraints they face.

[!1 WHO, “What happens when children live in unhealthy environments?” Available from https://www.who.int/mediacentre/factsheets/fs272/en/.
2 Mark M. Pitt, Mark R. Rosenzweig, Md. Nazmul Hassan, 2006. “Sharing the Burden of Disease: Gender, the Household Division of Labor and the Health Effects of Indoor Air Pollution in Bangladesh and India,” CID Working Paper No. 119.
3 WHO (2008), “Bangladesh: Health Profile.” Available from https://www.who.int/gho/countries/bgd.pdf

5 result(s)
Sure, We Can Build a Better Toilet. But Will People Use It?
Not Fired With Logic
South Asia Newsletter - July 2012 - New Evidence on Clean Cookstoves
Cleaner, 'Greener' Cookstoves Need Better Marketing In Bangladesh
Safe Stoves are a Tough Sell in Rural Bangladesh