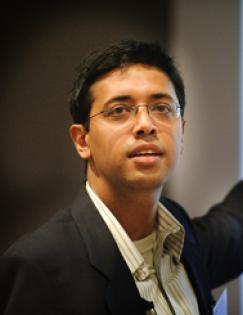 Ahmed Mushfiq Mobarak is a professor of economics at Yale University with concurrent appointments in the School of Management and in the Department of Economics. He also leads the Bangladesh Research Program for the International Growth Centre (IGC) at LSE and Oxford. He has previously worked at the World Bank and the International Monetary Fund. He is a development economist with interests in environmental issues and has several ongoing research projects in Bangladesh, Brazil, Chile, India, Indonesia, Kenya, and Malawi.

Mushfiq conducts field experiments exploring ways to induce people in developing countries to adopt technologies or behaviors that are likely to be welfare improving. His research has been published in journals across disciplines, including Econometrica, Science, The Review of Economic Studies, the American Political Science Review, Proceedings of the National Academy of Sciences, and Demography, and covered by the New York Times, The Economist, Science, NPR, Wired.com, the Times of London, and other media outlets around the world.

24 result(s)
Face masks for COVID pass their largest test yet
Largest study of masks yet details their importance in fighting Covid-19
Randomized study of mask-wearing illustrates their importance in preventing the spread COVID-19
Study: Effective campaign, free distribution can triple mask usage
An Interview with Ahmed Mushfiq Mobarak, Professor of Economics – Yale University
When Women Speak, Do People Listen?
Study Leverages Peer Effects to Encourage Adoption of Hygienic Latrines
Can the Microcredit Model Be Improved?
Scaling up good ideas is really, really hard – and we’re starting to figure out why
Bangladesh experiments with a new approach to poverty alleviation
How less than $20 can ensure food security in Bangladesh
Want To Help Someone In A Poor Village? Give Them A Bus Ticket Out
For toilets, money matters
Subsidies to poor increase toilet access, researchers find
(Video) Mushfiq Mobarak: Changing behavior in developing countries
Tax compliance and social acclaim
Bangladesh's powerful garment sector fends off regulation
Changing women’s lives in Bangladesh’s garment factories
Immigration and Innovation
Sure, We Can Build a Better Toilet. But Will People Use It?
Cleaner, 'Greener' Cookstoves Need Better Marketing In Bangladesh
Safe Stoves are a Tough Sell in Rural Bangladesh
A Visit to the Potty Lab
Let My People Go...But Busfare Certainly Helps: Seasonal Migration in Bangladesh