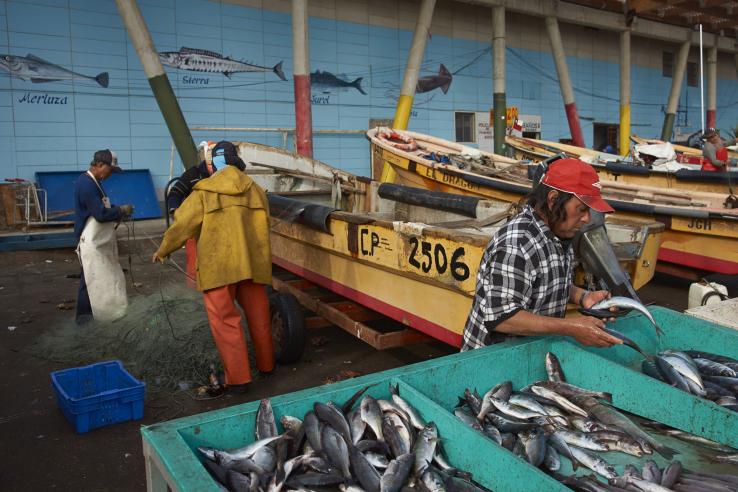 Chile, with one of the world’s largest fishing industries, faces a problem of extreme overfishing: 72 percent of species fished off the coast of Chile are over-exploited or at risk of extinction. The National Fisheries Service (Sernapesca in Spanish), which is responsible for protecting marine resources, has generally relied on enforcement mechanisms—patrols in ports, on highways, and in markets—to sanction illegal fishing. However, during a J-PAL LAC incubator course in 2014 funded by DIPRES (Dirección de Presupuestos), Sernapesca decided to compare an alternative approach, raising consumer awareness of illegal fishing and increasing audits in markets.

In September 2015, during the annual month-long ban on fishing hake (merluza común), Sernapesca partnered with J-PAL affiliate and Environment and Energy sector co-chair Mushfiq Mobarak (Yale) and Andrés Gonzalez (UC Berkeley) to conduct a randomized evaluation comparing a consumer information campaign with audits of stands in farmers’ markets by Sernapesca auditors. Preliminary results from the evaluation indicate that both approaches effectively reduced the sale and consumption of illegal hake. In a typical month outside of the ban, about 70 percent of fish vendors in farmers’ markets offer hake. During the ban, 30 percent of fish vendors in areas that did not receive either intervention continued to sell hake. However, only 15 percent of vendors sold hake in areas with audits and 20 percent sold hake in areas with the consumer information campaign.

Based on these results, Sernapesca decided to repeat the information campaign during the ban in September 2016 as well as conduct similar information campaigns to raise awareness of fishing bans for three other species (Southern hake, croaker, and spider crab). Furthermore, Sernapesca has started a pilot program to involve consumers in making more sustainable decisions throughout the year: The Sello Azul ("Blue Seal") will provide a distinction to restaurants selling legally acquired seafood, allowing consumers to choose to patronize those locations.