A growing body of scientific evidence suggests that face masks can protect against Covid-19. There is, however, limited rigorous evidence on the extent to which mask-wearing is effective in reducing Covid-19 in a real-life situation with imperfect and inconsistent mask use. In Bangladesh, researchers and IPA partnered with Bangladeshi policymakers and a local NGO to design and evaluate various strategies to increase mask-wearing and assess the impact of community mask-wearing on SARS-CoV-2 infection rates. They found that a four-part intervention tripled mask usage and increased physical distancing. Further, this increase in mask-wearing reduced symptomatic SARS-CoV-2 infections. When surgical masks were employed, 1 in 3 symptomatic infections were avoided for individuals 60+ years old—the age group that faces the highest risk of death following infection. This was the first large-scale randomized evaluation to demonstrate the effectiveness of masks in a real-world setting.

As of August 2021, the Covid-19 pandemic has taken the lives of more than 4.4 million people.1 While vaccines may contain the spread of SARS-CoV-2 in the long-term, it is unlikely that a substantial fraction of the population in low- and middle-income countries will have access to vaccines by the end of 2021. Determining scalable and effective means of combating Covid-19 is thus of first-order policy importance. Currently, institutions such as the World Health Organization (WHO) recommend masks as part of an overall portfolio of protective behaviors against Covid-19. Yet conversations with scientific advisors and institutions such as WHO and the United Kingdom government indicated that high-quality evidence on the effectiveness of mask-wearing would likely influence policy decisions about mask use.

Prior evidence to comprehensively answer policymakers’ questions is limited. First, while laboratory evidence shows that masks can reduce exhaled viral load and thus the probability of transmitting the virus,2 the extent to which this effect manifests at a community level in the real world, where masks may be worn imperfectly and inconsistently, is uncertain. Second, there is limited evidence on effective ways to rapidly promote mask usage in community settings. Third, critics argue that such adoption may lead to compensatory risky behaviors such as reducing physical distancing.

This research aimed to fill these gaps with the first large-scale cluster-randomized evaluation of the impact of masks to reduce Covid-19. The dual goals of the randomized evaluation were to identify strategies to encourage community-wide mask-wearing and to track changes in symptomatic SARS CoV-2 infections as a result of the intervention.

Bangladesh, the eighth most populous country in the world (165 million people), had approximately 1.5 million reported Covid-19 cases as of August 2021.3 It is also one of the most densely populated countries (density of 2,890 people/mi2),4 making preventive measures, such as physical distancing, extremely difficult to implement in many situations. In Bangladesh, the government strongly recommended mask use from early April 2020 and formally mandated mask use in late May 2020, threatening to fine those who did not comply.

Despite this, Innovations for Poverty Action (IPA) and local partners documented low mask-wearing; in a wave of surveillance between May 21–25, 2020, around 51 percent of more than 152,000 individuals observed were wearing a mask. This percentage declined rapidly; in a second wave of surveillance in June 2020, observed mask-wearing had dropped to 26 percent with 20 percent wearing masks that covered their mouth and nose.

Researchers partnered with the Ministry of Health and Family Welfare, the Bangladesh Medical Research Council, a2i (a data-focused arm of the government), Green Voice (a local NGO), IPA, and North South University to evaluate the effectiveness of various strategies on increasing mask-wearing and assess the impact of community mask wearing on rates of Covid-19.

To select participating villages, the research team chose 1,000 rural and peri-urban villages based on population data and in-person scoping. They used a pair-wise randomization to select 300 intervention and 300 comparison villages within the same upazila (Bangladesh is divided into 492 upazilas). Paired villages were similar in terms of (limited) Covid-19 case data, population size, and population density. All villages are at least 2 km apart to minimize spillover risk. Comparison villages continued mask-wearing as usual. 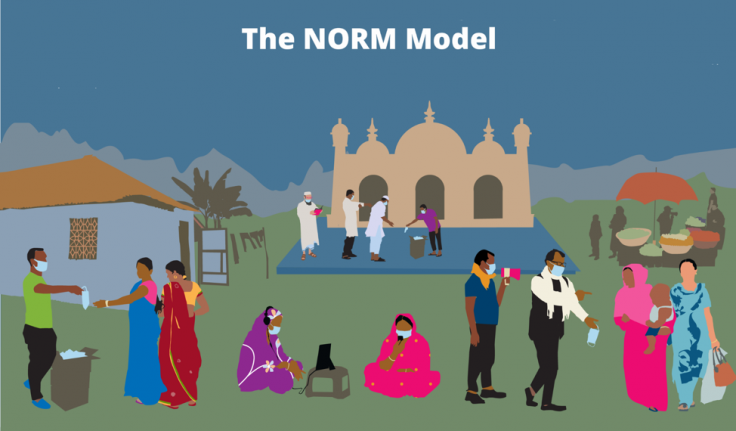 To test whether strategies other than the NORM model had an additional impact on mask usage, households in intervention villages also received different types of encouragement. The research team randomly selected villages in the intervention group (total 300 villages) to receive the following components:

The research team directly observed mask-wearing and physical distancing in public locations, including mosques, markets, main entrance roads to villages, and tea stalls, for ten weeks; during the intervention at selected intervals and two weeks after all intervention activities had ended. The research team also conducted longer-term data on mask wearing behavior 20–27 weeks after the launch of the interventions. Correct mask-wearing was defined as wearing either a project mask or an alternative mask over both the mouth and nose. A person was recorded as practicing physical distancing if they were at least one arm’s length away from all other people. Surveillance staff were separate from mask promoters and wore no identifying apparel while passively observing mask-wearing and physical distancing behaviors.

The investigators conducted a survey five and nine weeks after the start of the intervention to understand if participants had symptoms consistent with Covid-19 in the previous week and over the previous month. Twelve weeks after the start of the intervention, blood samples were collected and tested from participants who provided samples at baseline as well as from participants who reported Covid-like symptoms at any point in the evaluation. The blood samples were tested for SARS-CoV-2 antibodies to determine whether the participants had evidence of prior infection.

Use of masks: In villages that received the intervention, mask use increased by 29 percentage points (from 13 percent in the comparison villages to 42 percent in treatment villages). Mask use increased most in mosques (37 percentage points). A pilot and our scale-up activities suggest that in-person public reinforcement is a critical part of the intervention.

Symptomatic Covid-19: The intervention reduced Covid-19 (symptomatic SARS-CoV-2 infections) and Covid-like symptoms. Free mask distribution and promotion reduced the proportion of people who reported Covid-like symptoms on average by 11 percent, which was driven mainly by the effects of surgical masks. Villages where cloth masks were distributed experienced a 5 percent reduction in symptoms, while villages where surgical masks were distributed saw a reduction of 12 percent. About a third (40 percent) of those who reported Covid-19 symptoms agreed to have their blood tested for SARS-CoV-2. On average, researchers found a decrease of symptomatic SARS-CoV-2 infections of 9 percent. This reduction was higher in villages that wore a surgical mask (12 percent) and in these, among individuals aged 60+ (35 percent).

Behavioral Nudges or Incentives: None of the behavioral nudges or incentives at the community- or household-level led to additional increases in mask-wearing or physical distancing. Neither text message reminders, public signage, monetary and non-monetary incentives, altruistic messaging, nor verbal commitments had any effect on mask-wearing above and beyond the core intervention. Mask color had a statistically significant but minor impact on mask adoption.

This study has several implications for policymakers. First, there is clear evidence that community mask-wearing can reduce Covid-19. The effects were substantially larger in communities where surgical masks were distributed, consistent with greater filtration efficiency measured in laboratories, and surgical masks reduced 1 in 3 symptomatic infections among individuals aged 60+.

Second, community mask-wearing can be increased through a combination of four core intervention elements, now called the “NORM” model, which stands for “No-cost mask distribution, Offering information, Reinforcement to wear masks, and Modeling by local leaders." Many other factors did not increase mask-wearing: researchers found no evidence that public commitments, village level incentives, text messages, altruistic messaging, or verbal commitments changed mask-wearing behavior in this context, which underscores the importance of rigorous, real-world testing before rolling out behavioral interventions at scale.

Whether people with respiratory symptoms should generally wear masks to prevent respiratory virus transmission––including for viruses other than SARS Co-V-2––is an important area for future research. The findings from this study suggest that such a policy may benefit public health.