Public insecurity and widespread mistrust of police among citizens is associated with decreased police legitimacy, which has negative consequences for effective policing. While research has identified individual police behaviors that can create more positive interactions with citizens, little is known about how police units can institutionalize justice and fairness into organizational capabilities. In this multi-part study, researchers, in partnership with the Ministry of Public Security of Mexico City and the National Security Commission, are evaluating how police organizations in Mexico City can be more effective, resilient, and trusted.

Citizen trust in public safety and in the police can have important implications for the quality of policing, as well as for trust in the state in general. Widespread feelings of insecurity among citizens are associated with a decreased perception of police legitimacy, which can make it difficult for the police force to recruit top talent, secure funding, and convey information to the public. Mistrust in police and perceptions of insecurity may also reduce citizens’ participation in public safety efforts, which can limit the police force’s understanding of citizens’ needs and reduce police officers’ motivation.1 By applying a concept called “procedural justice,” police and law enforcement institutions may improve citizens’ perceptions of and participation in law enforcement efforts. Procedural justice emphasizes four principles that citizens want from their authorities: (1) the opportunity to be heard prior to police decisions; (2) police officer neutrality; (3) dignity and respect; and (4) clarity from the police about why they are doing what they are doing.2  Once citizens perceive that police officers act in accordance with these principles, they may view police as more trusted and legitimate.

While research has identified which police officer behaviors are associated with more positive interactions with citizens, little is known about how to institutionalize these behaviors throughout an organization through training programs, incentive and evaluation systems, internal communication methods, and other organizational characteristics, especially in Latin American contexts. How should governments design local law enforcement organizations to be more effective, increase citizens’ trust in institutions, and strengthen the rule of law?

Crime, violence, and a weak rule of law are among some of Latin America’s most pressing issues. Mexico in particular was ranked 99 out of 102 countries in terms of Order and Security in the 2017-2018 World Justice Project Rule of Law Index, and is the worst performer both within Latin America and among countries with similar income levels.3  Insecurity is also consistently listed as the top citizen concern, far above poverty, unemployment or public health.4 Mexico City is the country’s largest city, with 8.9 million inhabitants and 4 million daily commuters. Although Mexico City has one of the lowest homicide rates in the country, and has a largely effective police force, citizen perception of public safety and the reliability of the police force is consistently low. For instance, in 2017, 85 percent of Mexico City’s inhabitants reported feeling unsafe and only 37 percent reported having confidence in the police.5 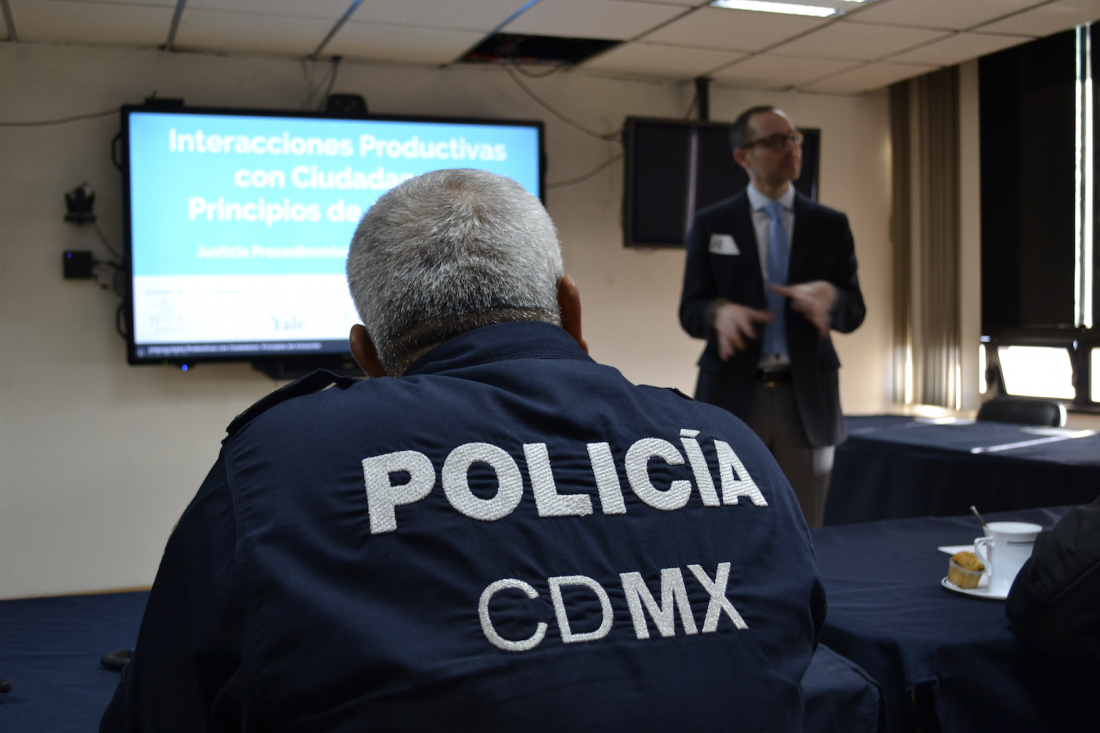 Researchers are working with the Ministry of Public Security of Mexico City and the National Security Commission of Mexico to evaluate the impact of a procedural justice approach on the effectiveness, resilience, and trust in Mexico City’s police force. In this study, researchers will:

Police officers and commanders who received the intervention participated in nine- to twelve-hour trainings over three days that were tailored to their roles. The training focused on strengthening the capacities of police officers to apply procedural justice principles when interacting with citizens in a variety of different situations Following the training, police officers and commanders received reminders in the form of a pamphlet and card with a summary of the information covered in the training, acknowledgment of participation in the workshop, and five or six reminder SMS.

To evaluate the impact of the intervention on comprehension, internalization, and behavior change, researchers have conducted baseline and endline surveys with participants, utilizing a photo journal exercise, in-depth interviews, and sending actors to simulate citizen interactions with police officers while wearing hidden cameras and microphones in both treatment and comparison sectors.

In addition to conducting this randomized evaluation, the research team will also work with Mexico City’s Ministry of Public Security to improve its data management processes and systems.

CompStat is a data and organizational management tool utilized by police departments in cities around the world to compile timely crime statistics and generate maps illustrating where and when crime is occurring. Mexico City’s CompStat is currently marked by inefficiencies, which has had detrimental effects on decision-making, allocation of resources and crime prevention.

The research team is using CompStat data to examine how existing patterns of police behavior translate into increases or decreases of citizen trust.  Following the evaluation exercise, the research team will work with the government to improve the data flow, data security, and data used for decision-making of CompStat and will ultimately propose a new CompStat model for the Mexico City police, which will be rigorously evaluated. The research team will also train CompStat users on a number of measurement tools that will allow them to assess the impacts of this new system on outcomes like data-driven planning, trust in police, and accuracy of police reporting.