Formal Rainfall Insurance for the Informally Insured in India

Of the 1.3 billion people worldwide living on less than US$1 per day, nearly 75 percent depend on agriculture for their livelihoods. Unpredictable rainfall is one of the largest sources of risk low-income farming households face, as low or excess rainfall can substantially reduce crop yields and lead to large drops in income and consumption. While few are formally insured against poor rainfall, rural households often belong to informal risk-sharing networks to partially insure against both household-specific risks and weather shocks. These risk sharing networks only provide partial insurance, and they may even limit risk-taking, since the risk-sharing partners would not want any one household to take excessive risk that they are liable to cover.

It is difficult to insure each farmer’s crop loss directly, since that requires the insurance company to monitor each farmer’s behavior and outcomes on his fields, which can be difficult and expensive. Index-based insurance that provides set payouts on the basis of a publicly observable event like the amount or timing of rainfall, is a way to administer agricultural insurance cheaply. While index insurance solves several marketing challenges, it introduces a new problem: basis risk. Basis risk is the risk that the insurance policy’s standard payouts may not fully cover a household’s losses because the amount of rain measured at the weather station and the farm could differ (see stylized depiction below). Relatively little is known about whether the low penetration of index insurance in rural areas might be due to pre-existing risk sharing through informal networks, or basis risk which limits the effectiveness of index insurance. 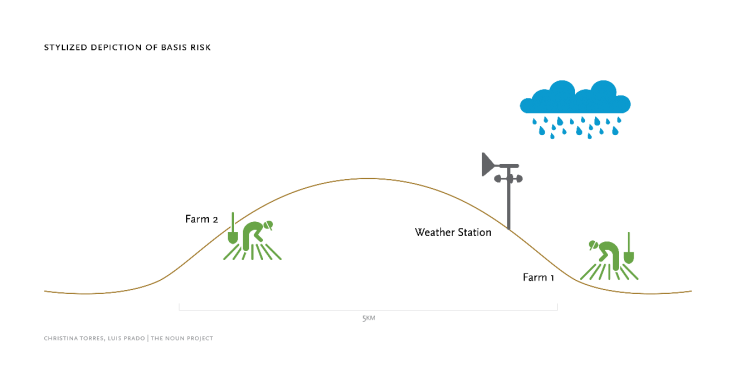 About 90 percent of variation in crop production levels in India is caused by variation in rainfall levels and patterns. While 90 percent of the Indian population is not covered by any formal insurance, informal risk-sharing arrangements between members of the same sub-caste are common. In India, sub-caste or jati is a centuries-old institution that has been shown to play an important role in risk sharing and business transactions. 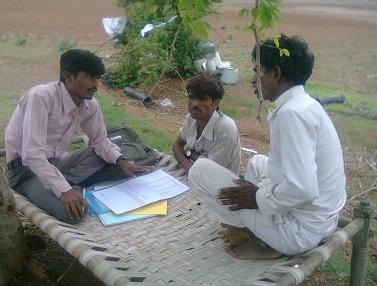 Researchers evaluated how informal insurance within Indian sub-castes affected the demand for formal rainfall insurance, and subsequent risk-taking among households employed in agriculture. From a sample of 63 villages in Tamil Nadu, Andhra Pradesh, and Uttar Pradesh, 42 villages were randomly selected to receive a marketing visit offering a new rainfall insurance product and the remaining 21 to serve as a comparison group.

Researchers partnered with the Agricultural Insurance Company of India Lombard (AICI) to design a rainfall insurance product that insured against losses due to delayed onset of the monsoon by providing payouts at three trigger dates during the monsoon season. For example, if an individual bought one unit of insurance, the first payout (INR 300 or US$6.991 ) would come if the monsoon was between fifteen and twenty days late; a larger payout (INR 750 or US$17.48) would come if it was twenty to 25 days late; and the largest (INR 1200 or US$27.97) would come if it was between 25 and forty days late. AICI used historical rainfall data to calculate village-specific insurance prices, depending on the risk of a delayed monsoon. The average price for a unit of insurance was INR 145 (US$3.38). The insurance was not crop-specific and was offered to agricultural laborers as well as landowners. To encourage households to purchase multiple units, researchers offered households bulk discounts of 10, 15, or 20 percent off the total premium if they purchased two, three, four, five, or more units.

In the 42 intervention villages, researchers also randomly offered insurance premium discounts, to test how price affects take-up. Each household was randomly assigned to receive a 0, 10, 50, or 75 percent discount on the premium. Finally, in intervention villages in Uttar Pradesh, researchers also randomly varied the location of the rainfall station to test the impact of basis risk on insurance take-up. All respondents were informed about the location of the nearest rainfall station as part of the marketing visit.

Take-up: Price and basis risk significantly affected people’s demand for formal rainfall insurance. Roughly 40 percent of households who received marketing visits purchased insurance, and of those 38 percent purchased multiple units, with 17 percent purchasing five units or more. Cutting the price in half increased the probability of take-up by 17.6 percentage points. Distance to the rainfall station negatively affected take-up: For every kilometer increase in the distance of the rainfall station for a farmer without informal insurance, demand for formal insurance decreased by 6.4 percent. These findings suggest that basis risk, or the risk that insurance payouts will not occur when the household needs coverage, was a significant impediment to taking up index-based rainfall insurance.

Impact of sub-caste-based informal insurance on take-up: Pre-existing risk sharing networks often provided coverage against household-specific losses (theft, death in family, crop loss) and sometimes even against aggregate rainfall shocks if other caste members were engaged in non-agricultural occupations or living farther away. This study found that members of castes that are good at providing support in times of aggregate shocks were less likely to purchase the monsoon insurance contract. On the other hand, members of sub-castes that are better at providing coverage against household-specific risks were more likely to purchase the monsoon insurance when the contract was associated with greater basis risk. Such informal networks can cover losses when the index contract fails to due to basis risk, which is why sub-caste based risk sharing complemented the demand for formal index insurance. Yet, when weather stations were nearby and basis risk was therefore limited, coverage of household-specific losses by the network had no impact on demand for index insurance.

Risk taking: Availability of formal insurance increased risk-taking among farmers. In particular, rice farmers who were offered the rainfall insurance product were more likely to plant a higher-risk, higher-return portfolio of rice varieties that was significantly higher-yield, and they shift away from crop varieties that were considered “safe” in terms of drought resistance. This suggests that index insurance could increase average incomes by removing the barriers farmers face in planting more profitable crops. However, as insurance is generally sold to landowners, landless agricultural laborers may not receive the same benefits: researchers ran a simulation that showed that agricultural wages become more sensitive to rainfall and that the landless are worse off, compared to a scenario with no insurance, when insurance is sold only to landowners.