Intestinal helminths—including hookworm, roundworm, whipworm, and schistosomiasis—infect more than one in four people worldwide and are particularly prevalent among school-aged children in low- and middle-income countries. While light worm infections are often asymptomatic, more intense infections can lead to lethargy, anemia, and growth stunting, and may weaken the immune system. There is a growing body of evidence that suggests that school-based deworming can generate immediate improvements in child appetite, growth, and overall health, and subsequent improvements in school attendance. However, in order to understand what level of public investment is worthwhile to support such public health measures, it is necessary to assess the long-run impacts of such programs, including both the effects on beneficiaries’ well-being as adults and the intergenerational effects on their children.

This study is a follow-up to the Primary School Deworming Program (PSDP) launched in 1998 by Investing in Children and their Societies (ICS) in Busia district—a poor and densely-settled farming region in western Kenya adjacent to Lake Victoria. Environmental research indicated that in 1998, over 90 percent of individuals in this area were infected with helminths, and that over one-third of these individuals had moderate to heavy infections (which would suggest higher morbidity). Helminth infections can be transmitted several ways, including contact with contaminated lake water (schistosomiasis) or contact with or ingestion of fecal matter (geohelminths). This can occur, for example, if children do not have access to a latrine and instead defecate in the fields near their home or school–where they also play.

At the time of evaluation, one quarter of Kenyan student absenteeism was attributed to abdominal pains likely due to intestinal helminth infections. Older children may have also missed school to take care of siblings who were sick as a result. 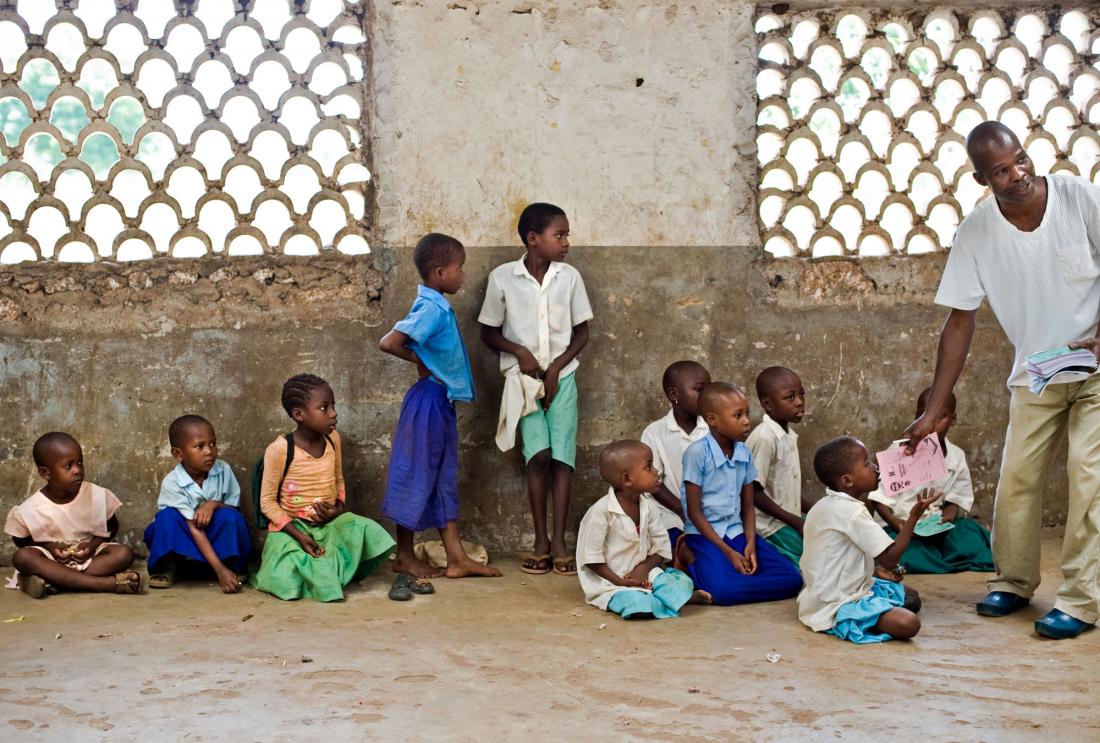 A 2004 evaluation by J-PAL affiliated researchers Edward Miguel and Michael Kremer examined the 1-2 year impacts of PSDP, and found that the deworming treatment led to large gains in school attendance and health outcomes. Children in treatment schools who did not receive deworming pills, as well as children living within 3 kilometers of treatment schools, also had lower worm infection rates and higher school participation.

In the long-term analysis, researchers examined health and education outcomes ten years after treatment, and labor market outcomes and living standards 10, 15, and 20 years later, at which point most subjects were 29 to 35 years old. Several rounds of the Kenyan Life Panel Survey (KLPS-2, 3, and 4) have been collected between 2007-2019, and tracked a representative sample of approximately 7,500 respondents who were enrolled in grades 2-7 in the PSDP schools at baseline in 1998. The follow-up surveys reached 84 percent of the individuals in the original study who were still alive at this time.

One decade after receiving the deworming treatment, health and education outcomes improved among individuals who received additional years of deworming as children. Up to twenty years later, hours worked and living standards continued to be higher, particularly among men and older individuals. Evidence from this study suggests that health interventions among school-aged children can yield substantial long-term benefits.

Impacts on health: At the ten year follow-up, there were no long-term effects on physical growth or body mass index. However, there is some evidence of improved self-reported health and reduced miscarriage. Respondents in the treatment group were 4 percentage points more likely to report that their health was “very good” relative to the comparison group mean of 67.3 percent. Deworming reduced miscarriage rates among women in the treatment group by 2.8 percentage points (from a base of 3.9 percent).

Impacts on education: The ten year follow-up found that deworming also improved school performance and future earnings. Additional years of deworming led to large academic gains for girls, increasing the rate at which girls passed the secondary school entrance exam by 9.6 percentage points over the comparison group mean of 41 percent. This increase of roughly 25 percent halved the existing gender gap in exam performance.

Impacts on labor supply and occupation: Ten years after treatment, additional years of deworming increased time men spent working by 17 percent, or 3.5 hours per week and time men and women spent working in non-agricultural employment by 45 percent for both men and women. Deworming treatment led to a shift in occupation choice: beneficiaries were three times more likely to work in manufacturing and less likely to work in casual labor. Twenty years after treatment, the number of hours worked outside of agriculture increased by 9 percent (almost two hours, on average), and mostly increased for men and older individuals. This was likely related to a 9 percent (4 percentage points) increase in individuals living in urban areas.

Impact on living standards and earnings: At the ten year follow-up, an additional two to three years of deworming led to more consumed meals per day, and increased earnings by more than 20 percent. Researchers suggested that the deworming treatment led men to shift into jobs that required more work hours and offered better pay.

At the twenty year follow-up, spending and earnings had increased by 13 percent and 14 percent, respectively, mainly for men and older individuals. Although additional years of deworming led to higher school enrollment rates, test scores, and self-reported health outcomes for women than men, these gains alone did translate into greater economic outcomes, likely because women faced key economic constraints and had access to fewer economic opportunities than men.

Returns to society: Mass school-based deworming generated benefits to society that were larger than the cost of the program, with an estimated rate of return at 37 percent per year.

Results on the intergenerational effects of the deworming program on beneficiaries’ children are forthcoming.