Relative to their share in the population, women are under-represented in all political positions – comprising only 19% of all the world’s parliament members in 2010. These gender disparities do not reflect legal restrictions in most cases – women can vote, support candidates and run for office in almost every country. It has been suggested that in both rich and poor countries, women’s access to public office is restricted by voter bias in favor of male politicians. Women’s reservation policies, guaranteeing a certain number of seats for female candidates, are advocated as a way to reduce the gender bias in politics. Evidence from past studies indicates that gender quotas are sufficient for empowering female leaders over the longer term through helping them overcome voters’ prejudices against women by demonstrating the capability of female leaders. In this context, complementing gender quotas with proactive information campaigns that provide voters objective and verifiable information about the performance of elected male and female leaders may both help change voter stereotypes and enhance electoral accountability.

In India, a third of the village council leader positions have been reserved for women by constitutional amendment since 1993 and the government recently committed to increase this proportion to half. The village councils control the allocation of funds for local infrastructure projects, such as construction and maintenance of drinking water and irrigation systems, road construction, and beneficiary selection for government programs. A key aspect of the quota legislation was that it resulted in the random assignment of villages to reservation of the position of chief village councilor to a female.

This study took place in rural Rajasthan, a state in India which has been severely affected by recurrent droughts. In 2005 , an employment generation schemes called the National Rural Employment Guarantee Scheme (NREGS), which guarantees 100 days of work to unskilled laborers and was particularly important in Rajasthan, was begun. Rajasthan ranks first across the country in terms of demand of labor under NREGS. Given the poverty, the droughts and the high level of dependence on agriculture in the region, NREGS has become popular, and the program has become central to the economic and political landscape of rural Rajasthan. 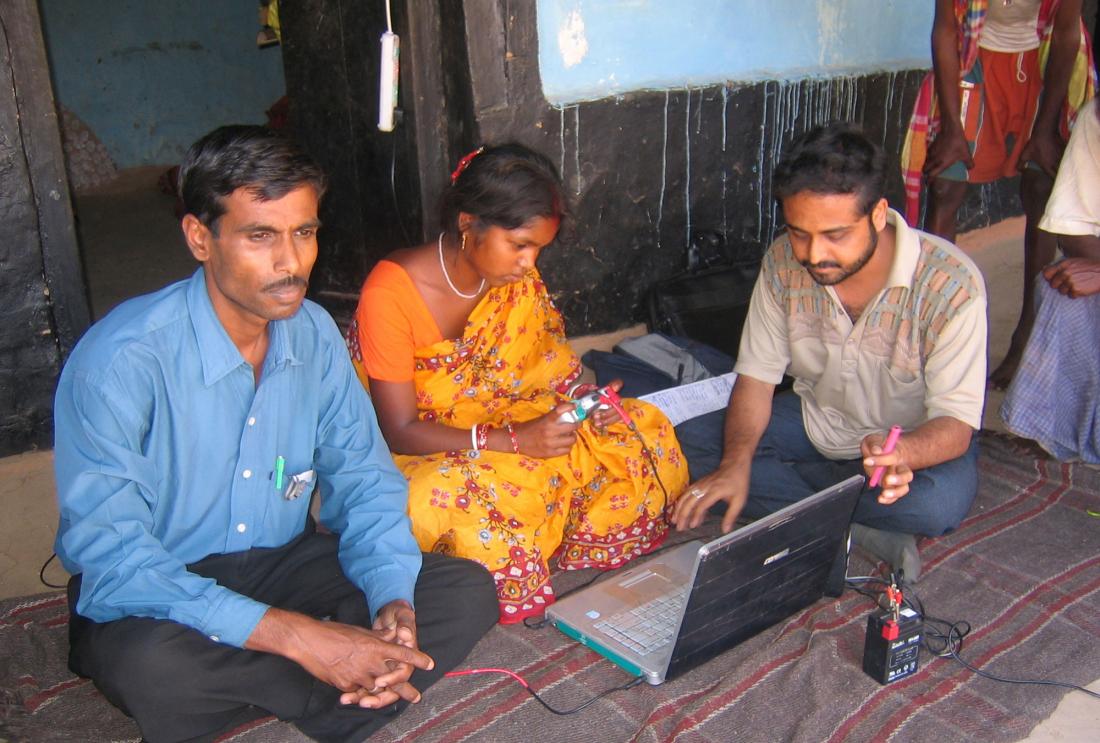 Woman on computer in Rajasthan, India

The intervention consists of a report-card based pre-election information campaign focusing on the role and performance of the average elected village council leaders in the district (not the representative of this particular village) in implementing public works programs, including NREGS. The information campaign was run by Prayatn Sanstha, a local NGO, in the 2-3 weeks preceding the village council elections in the state of Rajasthan. The campaign used only information publicly available on the internet, but it was packaged and made available to villages that do not have easy acess to the internet.

The campaign consisted of the provision of information on the role and performance of village council leaders and was disseminated by Prayatn using calendar posters and village theatrical performances. The information provided had two components:

Data was collected from administrative sources and household surveys. Researchers will examine the number of women candidates, electoral successes for women, voter turnout, incumbency patterns in the village councils, knowledge on NREGS, knowledge of the role of the political leader in implementing NREGS, and opinions on female candidates.

1.
See: "The Impact of Women Policy Makers on Public Goods in India", "Information, Accountability, and Governance Among the Urban Poor in Delhi, India", and "Politicians, Publicly-Released Audits of Corruption, and Electoral Outcomes in Brazil."

2 result(s)
In Indian villages, the power of a powerful woman
Dissecting the Double Standard