Intimate partner violence (IPV) is a significant global public health challenge, particularly in Liberia, where 35 percent of partnered women reported having experienced physical or sexual violence in the past year. In partnership with the Liberia National Red Cross Society, researchers evaluated a holistic approach to reducing IPV, in which vulnerable women received intensive psychosocial support and vocational skills training. The program reduced physical and emotional IPV; it also increased participants’ employment hours and expenditures. Researchers suggest that these impacts may be due to economic empowerment and a shift in social norms.

Intimate partner violence (IPV) is a global public health challenge: one in three women has experienced some form of physical or sexual violence in their lifetime.1 This type of violence is associated with many negative physical and mental health issues. There have been many policy discussions of strategies to prevent and respond to IPV, which may include efforts to shift individual behaviors and attitudes, challenge social norms, and strengthen women’s economic empowerment. Many public health professionals recommend that—because IPV is caused by a variety of psychological, social, economic, and cultural factors—IPV prevention and response require multifaceted interventions that address multiple underlying drivers. Can combining vocational skills and business training with psychosocial support help protect women from violence?

IPV is particularly prevalent in Liberia, where this evaluation took place. In the most recent Demographic and Health Survey (DHS), 35 percent of partnered women between ages 15 and 49 reported having experienced physical or sexual violence in the past twelve months, compared to an average of 26 percent in other African countries where DHS data is available. There could be many factors contributing to this high baseline level of IPV, including poverty and the legacy of the violence perpetrated against women and girls during Liberia’s civil wars.

In 2009, the Liberia National Red Cross Society (LNRCS) launched the Women Training and Integration (WIN) program, a multifaceted female empowerment program. The program recruits vulnerable women in informal settlements of Monrovia, the capital city of Liberia. WIN is designed to empower these women economically and psychosocially so that they can self-sustain their lives and protect themselves from abuse.

The program has two primary components. The first is psychosocial therapy, including one-on-one and group counseling sessions and cognitive behavioral therapy (CBT). The therapy is focused on healing trauma, supporting coping mechanisms, and strengthening relationships with spouses and other family members. The second component is vocational skills (a choice of baking/catering, hairdressing/cosmetology, or tailoring) and business training centered around helping participants set up and manage a small business. The program is intensive, requiring a twelve-month commitment, during which time participants join activities at the WIN center for four to five hours a day, five days a week.

About 51 percent of women in the study reported having experienced physical or sexual IPV, higher than the national average of 35 percent. Only 11 percent of women in the sample reported having any job, and 25 percent were self-employed. The average income was US$8 a month, while the mean spouse’s income was US$19 on average, suggesting that many women were not financially independent at the outset of the program. 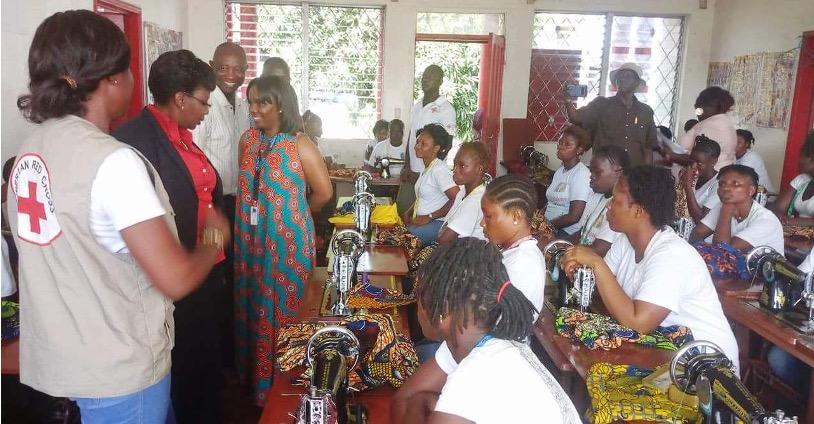 Researchers partnered with the Liberia National Red Cross Society (LNRCS) to conduct a randomized evaluation of the Women Training and Integration (WIN) program.

Study participants comprised women who voluntarily applied to the program and were selected by LNRCS through its need-based screening process. Ultimately, 395 women were enrolled in the study. Of the 198 women who were randomly selected to participate in the program, 152 women ultimately enrolled; 197 women comprised the comparison group and did not receive an intervention.

Participants were interviewed in April 2019 (shortly before the intervention began) and April 2021 (approximately twelve months after the program concluded). Researchers measured IPV outcomes including controlling behaviors and emotional, physical, and sexual IPV, for respondents who were currently partnered or had been partnered in the previous twelve months. Researchers also collected data on labor supply, income, expenditure, savings, psychological well-being, and social norms around IPV.

In addition to receiving ethical review and approvals from institutional review boards in the United States and Liberia, researchers instituted WHO’s ethics protocol for IPV research and trained enumerators (all of whom were women) to safely conduct the interviews. Surveys were conducted in private with enumerators prepared to switch to non-sensitive subjects if they were interrupted. At the end of the interview, enumerators provided all respondents with a list of resources for women experiencing IPV.

One year after the end of the program, the combination of psychosocial support and vocational and business training significantly reduced the proportion of women who experienced emotional, physical, and sexual IPV. The program also increased participants’ labor hours and monthly expenditures.

Social norms: Respondents were asked if they thought various scenarios of IPV were justified (e.g., “In your opinion, is a husband justified in hitting or beating his wife if she argues with him?”) and then whether their community would view each scenario as justifiable. The intervention decreased the perceived justifiability of physical or sexual IPV by 0.2 standard deviations, suggesting that a change in social norms may have contributed to the reduction in the actual experience of IPV.

Psychological empowerment: The program did not have a statistically significant effect on measures of psychological distress or happiness. While psychosocial therapy was one of the core program components, it would be consistent with previous research if any short-term improvements in psychosocial well-being dissipated after one year.

These findings suggest that a holistic approach to IPV prevention, combining psychosocial therapy with vocational skills training, is effective. This is consistent with the public health literature on IPV, which emphasizes the importance of considering the multi-level factors of IPV when designing interventions.