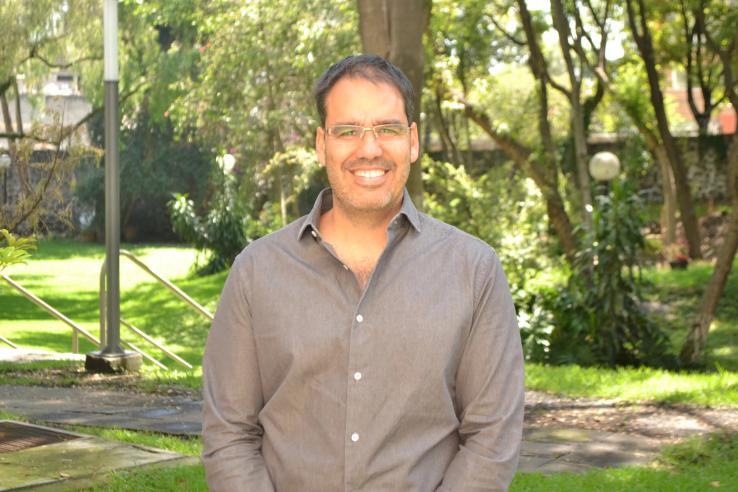 Enrique Seira is a professor of economics at Michigan State University and founder of Qué Funciona para el Desarollo. He utilizes his research on courts, democracy, corruption, and credit markets to help steer the policy space in Mexico toward more rigorous evidence use.

Enrique has been fascinated with the challenges of development and inclusion from an early age. He grew up in the small town of Chihuahua, Mexico, close to the border with Texas. Crossing the border to El Paso meant visiting another world, with networked highways where his parents strictly adhered to driving speeds and stop signs.

Enrique was always intellectually curious, and when he heard about ITAM, a small university in Mexico City, and its renowned economics program, he made it his goal to study there. Although his high school counselor was skeptical of his chances, Enrique was accepted and successfully completed his undergraduate degree.

ITAM was intellectually challenging, but it also had something else: it was an influential center for policy ideas. Conducting policy with rigor became Enrique’s goal, and ITAM’s high-quality research and integration in policy circles made it an ideal place to start a policy-oriented research career.

Following his PhD at Stanford, Enrique worked at the World Bank’s International Finance Corporation and the Mexican Treasury. “I highly recommend working in government and policymaking to any economist,” Enrique said. “There is no better way to grasp the complexities of doing policy, the frustrations that come with facing entrenched interests…it’s how I understood that the battle of good policymaking is a constant and long-term one.”

Enrique’s experience in the office of Mexico’s Secretary of the Treasury early in his career was formative in shaping his research interests. Working on consumer protection efforts in credit markets and programs like Oportunidades-Prospera (a conditional cash transfer for low-income households) helped launch his research agenda. Enrique’s time in government also underscored the importance of evidence over ideology in making effective policy decisions. Enrique witnessed bureaucrats opposing impact evaluations of government programs out of fear that the outcome of an evaluation could cost them their job, and saw politicians overturning a promising solution because of their personal interests. Through this experience, he came to understand that “development is often not a technical problem, but a political one… During this time it also became clear that what I really liked were ideas and evidence, the rigor and the time to think through problems, and the staying power of potential solutions.”

Armed with this insider experience, in his current role as an academic researcher, Enrique (along with his coauthors Joyce Sadka and J-PAL affiliate Christopher Woodruff) has been successful in measuring problems in Mexican courts and in helping align Mexican labor law with findings from rigorous research.

Enrique received funding from J-PAL’s Governance Initiative to work with the Mexico City Labor Court to identify solutions to low case settlement rates and backlogs that caused extensive delays for citizens seeking to access justice. He and his team studied the impact of two approaches: providing information to citizens about the likelihood of successful case outcomes, and providing mediation services to increase settlement rates outside of the courtroom. Both approaches nearly doubled the immediate settlement rate when a plaintiff was there to personally receive the information. Using these insights, the Mexican government passed a labor law reform which requires workers to have an in-person mediation meeting before filing a severance case, and to provide statistical information to parties on the likelihood of successful settlement before they sue.

Enrique stressed the importance of relationship-building to the success of this evaluation, citing his coauthor Joyce Sadka's regular meetings with the Mexico City Labor Court and Ministry of Labor and her involvement in drafting the reform itself. Enrique and his team are now building on this evaluation by creating a Lawyer Bureau to help clients find lawyers based on their qualifications. In this way, Enrique said, “Policy influence can be achieved. It requires not only evidence, but also direct and intense contact with policymakers.” Financial support from the Governance Initiative played an important role in getting this and Enrique’s other research off the ground. “J-PAL was transformational in helping kick-start my career,” he said.

Enrique’s dedication to evidence-informed policy led him to found and direct Qué Funciona para el Desarollo (QFD), a nonprofit organization that provides low-cost services to help researchers conduct policy-relevant research in Mexico. “Middle-income countries are often in a conundrum when it comes to receiving research funding for development,” he said. While they frequently lack the resources to finance research, they may struggle to attract funding from donors who may be more focused on lower-income contexts. QFD has helped researchers from several universities conduct field work in Mexico, ranging from studies on maternal and child health outcomes to financial access.

Reflecting on his career path, Enrique attributes his success as a researcher to having a profound passion for the topics you work on, good relationships with coauthors and advisors, and perseverance. “Being resilient and seeking input from mentors will help get your project across the finish line.”

Enrique has been a J-PAL affiliate since 2010. For more information about J-PAL and to read about his research, visit https://www.povertyactionlab.org/person/seira.

Challenge: In Mexico, labor courts have a large case backlog leading to slow case decisions for dismissed workers seeking severance pay, and low access to justice. Workers can be both misinformed and overconfident about winning their case, leading to low settlement rates, and making them easy prey for low quality lawyers with misaligned incentives.

Research: Enrique and his coauthors evaluated the impact of providing information about predicted case outcomes on settlement rates. The team worked closely with the Mexico City Labor Court (MCLC) in 2016 to randomly assign certain defendants to receive customized information about their case’s predicted outcomes or stay in the business as usual.

Results: Information decreased overconfidence and almost doubled the immediate settlement rate, switching cases that would lose at trial to settlements. Workers got higher payments on average and got them faster.

Scaling: Informed by the research, the Government of Mexico passed a labor law reform which requires workers to meet in-person with a conciliator before filing a severance case and providing statistical information. Enrique’s coauthor Joyce Sadka advises states on the implementation of this labor law. Their utilization of IT programming for this reform will allow scale-up across Mexico;  creating a web-based lawyer bureau, case tracking, and online suing systems is the next step.