Providing Sexual and Reproductive Health Advice via SMS in Uganda

The rapid adoption of mobile phones in low- and middle-income countries has created new opportunities for disseminating information to large populations at a low cost. Recently many public health organizations have designed projects that use mobile technology to support health services and health education. In contexts where knowledge about a particular health topic is low, people often lack adequate information to make decisions that will maintain or improve their health. This lack of information can lead them to underestimate the specific health risks they face and perhaps engage in risker behavior than they otherwise would have chosen.

In Sub-Saharan Africa, about 1.8 million people became infected with the HIV virus in 2011, with the majority of new cases attributed to unprotected sex. One potential way to reduce the rate of unprotected sex and STI infection could be to improve access to sexual health information. Can providing mobile phone users with sexual and reproductive health information via text message improve their knowledge of safe and unsafe sexual behaviors and ultimately lead to reductions in risky sexual behavior?

Uganda has several features that make it a prime candidate for a technological intervention focused on sexual health. HIV prevalence is high: UNAIDS estimated HIV prevalence to be 6.5 percent among adults aged 15–49 in 2009. In addition, UNAIDS reports that knowledge regarding sexual health and HIV/AIDS is low and risky sexual practices, like low condom use, are prevalent. Misconceptions about sexual and reproductive health are widespread and access to reliable information or sexual education is limited. At the same time, three quarters of the adult population are literate and there has been a rapid increase in mobile phone ownership. In 2002, less than 3 percent of the population owned a mobile phone, but by 2010 over one-third of the Ugandan population owned one. 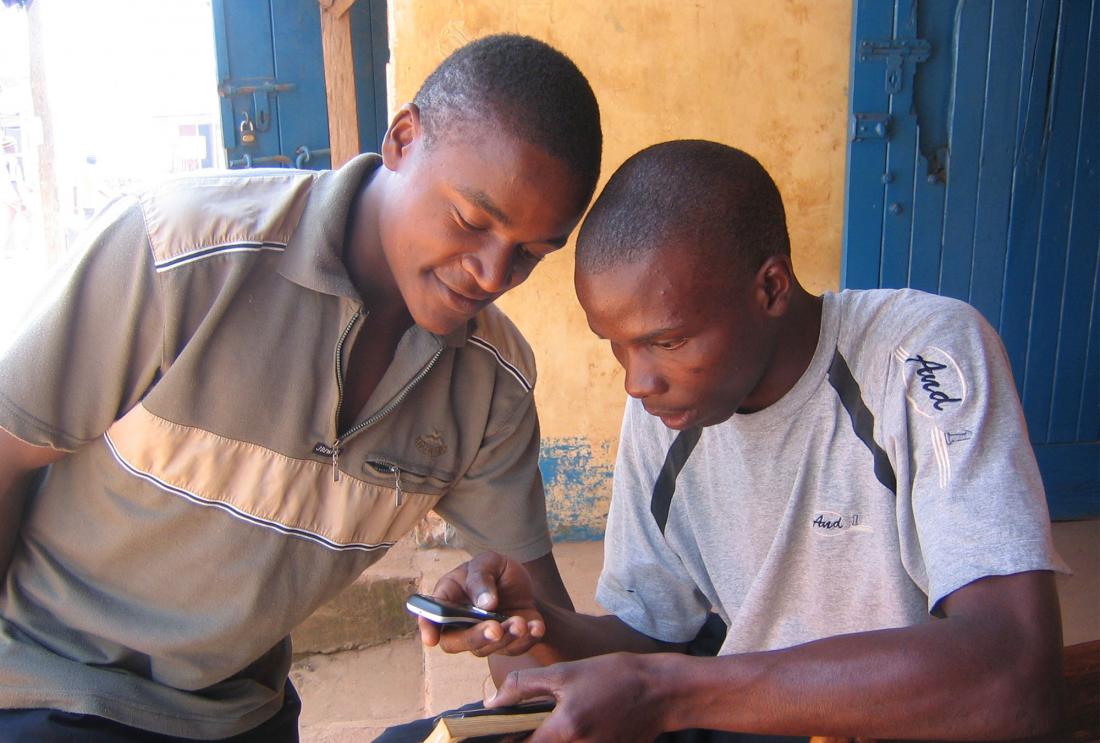 Researchers conducted a randomized evaluation to test the impact of improving access to sexual and reproductive health information via SMS message service on health knowledge, attitudes, and risky sexual behavior. From a sample of sixty villages in Masaka, Mpigi, Mityana, and Mubende districts in Central Uganda, researchers randomly assigned villages to receive encouragement to use a new mobile phone-based sexual and reproductive health information service, or to serve as part of the comparison group.

The sexual and reproductive health information service, called 6001 (the phone number to which users send a text message), was developed by Google.org, Google, Grameen Foundation, and MTN, Uganda’s largest mobile phone service provider. It allows mobile phone users to text questions on sexual and reproductive health to a server and to receive pre-prepared advice from a database of responses about HIV/AIDS, other STIs, maternal and neonatal health, body changes and sexuality, and family planning. The database has approximately 500 unique messages. Messages are about 500 characters long, consist of factual information presented in simple language, and often include an encouragement to use condoms or get tested for HIV. For example, in response to the question, “What does HIV reinfection mean?” users received the following SMS message:

"There are different types (strains) of HIV/AIDS so even if you are already infected you can catch another type of the virus which can make you more sick. HIV reinfection is when somebody who already has HIV gets the virus again by having sex without a condom with an infected person or if infected fluid gets into their body through cuts/unsterilized sharp instruments. Use condoms EVERY TIME to protect yourself + others."

Users can send queries in English or Luganda and receive responses in the respective language. They can also send in the name of a particular health issue and their location to receive contact and service information for the nearest health facilities.

In villages that received encouragement to use the 6001 service, marketing teams visited trading centers three to six times in August 2009, depending on population size, and each time spent a full day promoting the service through demonstrations and flyers and posters in both English and Luganda. Comparison villages did not receive this extra marketing encouragement, but they could still use the 6001 service. One year after conducting the baseline survey, researchers conducted a follow up survey with over 2,400 respondents in intervention and comparison villages in February 2010. They complemented the quantitative data with qualitative data from eight focus groups and 39 in-depth interviews that covered perceptions of the 6001 service, usage behavior, and perceived sexual health knowledge, behavior, and attitude changes.

To get more truthful answers on sensitive topics like condom use and number of sexual partners, researchers used a survey technique called list randomization. List randomization enables respondents to report on sensitive behavior without allowing the researcher to identify their individual response. Half the participants were randomly selected to receive a short list of activities and asked how many they have engaged in, but they do not have to state which ones. The other respondents see the same list of activities, but a key sensitive activity of interest to researchers, like condom use, is added. The difference in the average number of activities done in the two groups lets the researchers estimate the proportion of respondents who engage in the sensitive behavior. In addition, the difference between answers to questions that directly asked respondents about risky sexual behavior and answers to the list randomization questions allowed researchers to measure whether the 6001 service had an impact on whether participants perceived risky sexual behavior as more or less socially acceptable.

Impact on take-up and use: Forty percent of respondents living in villages that received the marketing encouragement sent in at least one SMS message to the 6001 service in the following year, relative to 7 percent in comparison villages. Between December 2009 and April 2010, the average total number of text messages sent per day from all phones associated with treatment villages was 4.0, compared to an average of 1.5 messages per day from all phones associated with comparison villages. While respondents in intervention villages continued to use 6001 significantly more than respondents in comparison villages, use dropped dramatically after the marketing firm stopped promoting the service in trading centers. In qualitative interviews, respondents in intervention villages said they would have liked to be reminded about the existence of the service for a longer time period. Overall, 6001 users were more likely to be male, young, married, to own a personal phone, and have slightly higher education levels.

Impact on knowledge and risky sexual behavior: Increased access to information through the 6001 service did not increase sexual and reproductive health knowledge and led to an increase in self-reported promiscuity for some and abstinence for others. Researchers found no significant increases in knowledge about possible modes of HIV transmission or effective contraception methods and use in intervention villages relative to comparison villages, but found a higher incidence of risky sexual behavior and increased self-reported promiscuity, particularly among men. They also found increased abstinence as well, particularly among women, who were 6.3 percentage points less likely to have had sex in the past year. Self-reported infidelity (defined as reporting having been unfaithful to one’s current partner in the past three months) increased from 12 percent to 27 percent, as did the number of sexual partners for men. Overall, individuals in intervention villages did perceive their sexual behavior as being riskier, which could be an indication that 6001 led them to more accurately assess the health risks they face. However this change could also be the result of their riskier self-reported behaviors and possibly a desire to answer the surveyor in a particular way.

Qualitative interviews shed light on the possible reasons why the 6001 service had this mixed impact. For information provision to result in behavior change and improved health, people must use the service, obtain useful information from it, and be able to act on it. Since risky sexual behavior inherently involves more than one person, respondents may not have been able to stop engaging in risky practices due to the power balance in their relationship. Both male and female respondents reported that married women learned from the service about the risks associated with having an unfaithful partner and as a result insisted that their husbands be faithful and go for STI testing with them. According to qualitative reports some husbands complied while others did not, leading women to deny them sex and men to seek it from other partners instead.

The results of this study suggest that introducing an information technology that is left to individuals to self-direct their use may not be enough to lead to the desired behavior change. Since sexual behavior change requires two people to agree to adopt less risky behaviors, easing access to health information may not be enough to convince both partners to change, and can potentially directly or indirectly lead them to make riskier choices.