In many low-income countries, girls often drop out of school, marry, and have children early in life, which may create a cycle of gender inequality. Niger has some of the largest gender inequalities in the world, including high rates of child marriage and low secondary school enrollment. The Government of Niger, the National Institute of Statistics of Niger, and the World Bank partnered with researchers to evaluate the impact of secondary school scholarships for girls on skill development and empowerment. Reducing financial and logistical barriers for girls to attend school in rural Niger improved their secondary school enrollment, reduced early marriage, and improved their self-reported wellbeing.

In many low- and middle-income countries, gender inequalities begin at a young age and influence individuals’ long-term trajectories. In particular, child marriage often has significant long-term effects on women’s life trajectories. Though child marriage is illegal in many countries, these laws are often not strictly enforced. Women who marry young may be more likely to drop out of school, reducing their potential to have a professional career. Additionally, women who marry young tend to have children at an earlier age, which can be a significant health risk for young women. Research also suggests that women who marry young have less decision-making power in the household on average, and are more likely to experience domestic violence. 1

Increased education may be effective at reducing child marriage, as additional education could diminish the time available for romantic relationship building, increase one’s motivation and aspiration, or build tangible skills that make the workforce more attractive and early marriage less so. However, numerous barriers could prevent girls from attaining education, including costs and long distances to attend school. Can encouraging girls to stay in school by providing middle school scholarships that reduce the financial and logistical constraints to attendance, reduce child marriage rates and improve their future economic and social trajectories?

Niger has one of the highest rates of child marriage in the world, with 76 percent of women aged 20–24 marrying before age 18 (and 28 percent before age 15). These high rates may in part be due to the fact that premarital sex and pregnancy is highly stigmatized in Niger, and some families see early marriage as the best way to prevent those outcomes. Additionally, while primary school enrollment in Niger has increased dramatically in recent years, secondary school attendance is more limited. In 2016, only 36 percent of girls began and 14 percent completed lower secondary school, perhaps because the network of secondary schools is sparse in rural areas, where 83 percent of the population resides. For residents of these rural communities, costs associated with traveling long distances to school may reduce girls’ likelihood to remain in school. In order to obtain secondary education, girls may need to stay with a host family during the months of the school year—a long-standing tradition in Niger—which is financially untenable for many.

During the first year of this study, girls were 13.3 years old on average. Their educational aspirations were quite high relative to typical educational attainment in Niger; 58 percent hoped to attend higher education, while another 27 percent hoped to attend high school but not higher education. Additionally, girls in this study tended to come from relatively disadvantaged households, as 72 percent of household heads had never gone to school and an additional 24 percent did not go beyond primary school. Only 1 percent of girls were married at baseline, though 5 percent were promised, and they expressed an ideal age of marriage of 18.4 and an ideal age to have a first child of 20.6.  Additionally, to be eligible for the program, girls had to meet a minimum grade average, have no disciplinary problems in grade 5, and they also had to apply to the nearest secondary school in the final year of primary school (grade 5). 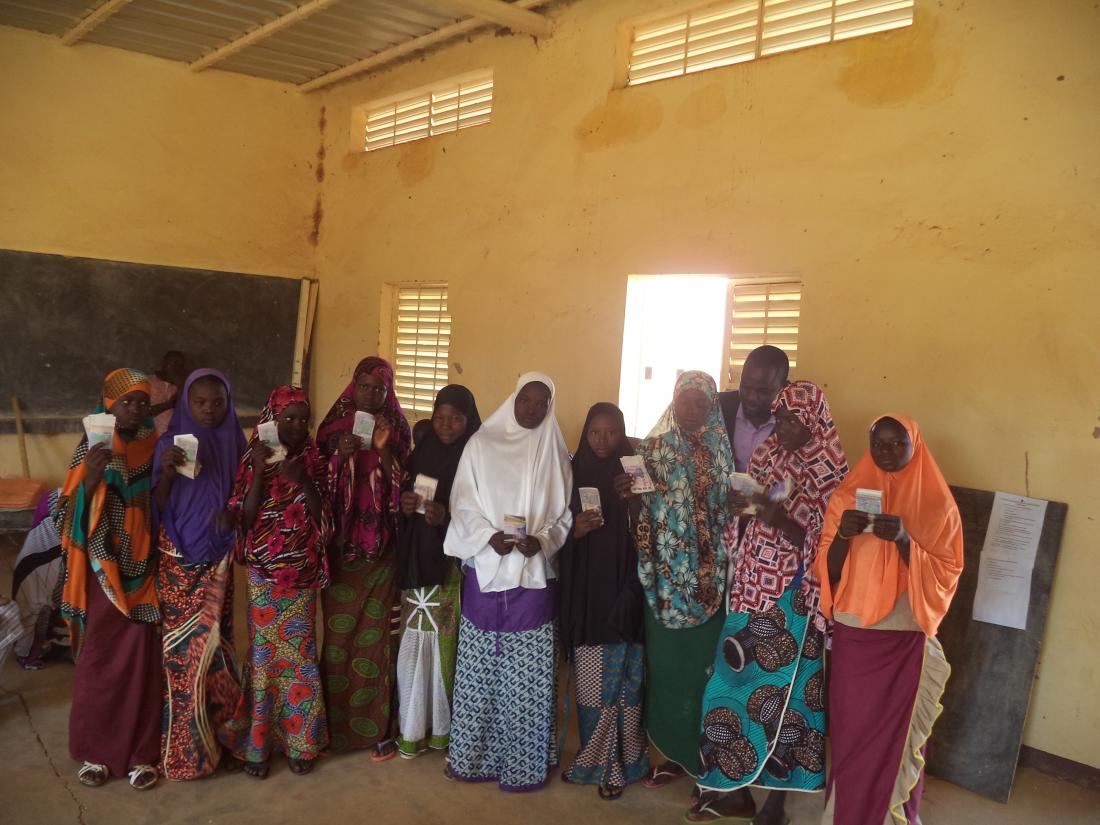 In partnership with the Government of Niger, the National Institute of Statistics, and the World Bank, researchers evaluated the impact of a three-year scholarship for girls without a secondary school in their village on their educational attainment, marriage rates, women’s empowerment, and economic opportunities.

The scholarship provided CFA 180,000 (US$306 in 2018) over nine monthly transfers during the school years from 2017-2018 to 2019-2020 for living expenses on the condition that the girls would remain enrolled and would not repeat more than one year. Girls’ host families received CFA 15,000 (US$25.50) each month for hosting. Girls’ families received the additional CFA 5,000 (US$8.50) per month for out-of-pocket expenses like school supplies and uniforms. Together, this scholarship was equivalent to 53 percent of the average individual income in Niger in 2018. The scholarship also provided four hours per week of optional remedial tutoring in French and mathematics.

Of 352 eligible villages (those without a secondary school) identified by the Government of Niger, researchers randomly selected 285 to participate. Researchers then randomly assigned each village to offer varying shares of scholarships to the 2360 eligible girls included in the study:

Due to implementation issues, including a lack of local banks into which to deposit money, many girls did not receive their first payment until the end of their first year of secondary school, in June 2018.

Researchers conducted a follow-up survey in August 2020, in which girls, their mothers, and the head of household were all interviewed. Researchers asked girls’ about their level of education, marital status, fertility, aspirations (educational, professional, and familial), and opinions on appropriate gender roles. They also asked questions and constructed indices to measure girls’ academic skills, psychosocial skills, and knowledge about sexual and reproductive health.2 The household head received questions about each household member, while mothers received questions about their educational, vocational, and familial aspirations for each child.

Girls in the universal scholarships group had much lower dropout rates relative to the comparison group: 81 percent were still enrolled in school three years later, compared to 60 percent in the comparison group. The intervention did not increase the percentage of girls enrolled in Grade 8 (the class in which they should have been enrolled at follow-up had they not been repeated), but it did increase the proportion of girls enrolled in Grade 7 by 20 percentage points (100 percent). These results may suggest that the intervention was most effective at encouraging girls who were struggling somewhat to remain in school.

Girls in the universal scholarships group also performed better academically in math, though there was no effect for literacy other than an improvement in ability to read letters. In math, the proportion of girls who could do addition, subtraction, multiplication, and division all increased by at least 14 percentage points (knowledge of these skills in the comparison group ranged from 72 percent to 47 percent).

Girls in the universal scholarships group had a 7 percentage point (50 percent) lower probability of being married at the end of the study relative to the comparison group. However, girls in the universal scholarships group were not detectably more or less likely to have ever been pregnant, and they had no increased sexual or reproductive knowledge relative to the comparison group. Lastly, there was no impact of the intervention on psychosocial skills.

Girls in the universal scholarships group report greater life satisfaction by approximately 0.25 standard deviations, relative to the comparison group. This suggests that, during adolescence, remaining in middle school is beneficial for individual wellbeing, even for those who struggle in school and have to repeat a grade.

Girls in this group increased their desire to attend high school by 7 percentage points (11 percent), complete high school by 8 percentage points (13 percent), and pursue higher education by 16 percentage points (53 percent) relative to the comparison group. Their expected income also increased by 15 percent, and they were more likely to report wanting a modern job rather than a traditional job. Their desired age at which to get married and to have their first child also increased, by 0.7 and 0.9 years, from a comparison group mean of 20.0 and 21.3, respectively.

Mothers of girls in the universal scholarships group also expressed increased ambitions for their daughters, with the share of mothers wishing for their daughters to go to college increasing by 10 percentage points (36 percent). The share of mothers wanting their daughters to have a professional occupation also increased by 13 percentage points (18 percent). Lastly, the age at which they wanted their daughter to get married increased by 0.6 years, from a comparison group mean of 20.2 years. These results suggest that maternal preferences for early marriage are somewhat malleable, and not an insurmountable barrier to women’s empowerment.

Effects on other girls

Overall, eliminating financial barriers to middle school generates unambiguous large benefits for girls who received scholarships. In terms of mechanisms, the effect on girls' education and marital status is not simply due to their forced presence in school, as researchers find evidence suggesting that increased human capital and modernization of views also play a role. More research is needed to determine the potential mechanisms of these scholarships’ effects, and for which populations similar interventions would be most effective.

1.
Jensen, R., & Thornton, R. (2003). Early female marriage in the developing world. Gender & Development, 11(2), 9-19.
2.
Researchers developed the academic skills index through a series of standardized tests on literacy and numeracy; the psychosocial skills index by asking questions designed to measure problem-solving, perseverance, self-awareness, interpersonal skills, self-efficacy, and creativity; and the knowledge on sexual and reproductive health index by asking questions to assess knowledge on pregnancy and delivery, contraceptive methods, and HIV transmission and prevention.