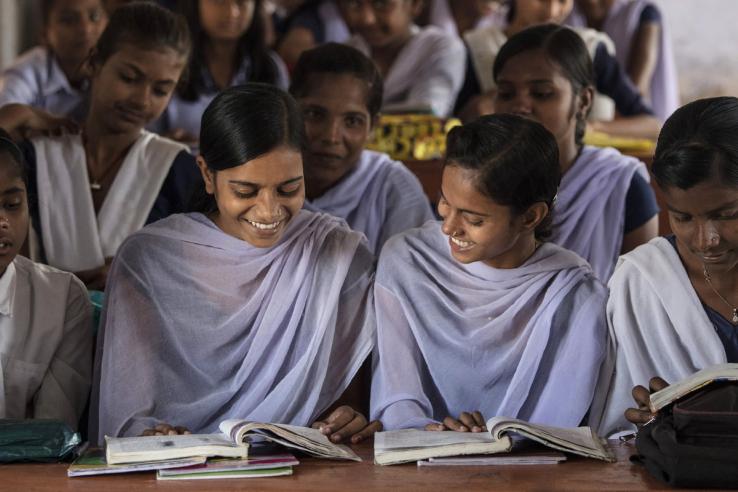 Over the last two decades, school enrollment has increased dramatically in low- and middle-income countries. However, student learning has lagged behind: even after completing several years of school, millions of students lack basic literacy and numeracy skills [1]. Further, girls, who face additional constraints due to gender norms and gender-based discrimination, might benefit less than boys when they do attend school, which might in turn widen existing gender gaps in learning outcomes.

Globally, girls are twice as likely as boys to never start school and are less likely to complete primary and secondary school. Gender-based differences in learning also exist, but are subject -specific: for example, in most countries, 15-year-old girls, on average, perform better than boys of the same age on reading tests, but worse on science and math tests [1]. Evidence suggests that interventions to increase school enrollment and attendance tend to help the most disadvantaged gender (often girls) most, with some exceptions [2]. Do interventions aimed at improving learning, such as remedial education programs or innovative approaches to teaching, also help the disadvantaged gender more? Further, are gender-neutral interventions sufficient to improve learning among girls, who are often the more vulnerable gender? Or do gendered social norms block gender-neutral programs from benefiting girls, thus exacerbating existing gender inequalities?

Results from 54 studies of programs to improve learning in low- and middle-income countries, all of which reported program impacts by gender, indicate that in a small number of cases, aspects of program implementation, such as preferential treatment afforded to boys by tutors or gender stereotypes, prevented girls from benefiting from programs to the same extent as boys. In other instances, girls benefited more from design features within programs that supported their needs, such as the presence of female role models or the ability to learn in groups with friends. More research is needed to understand how the effects of programs to improve learning vary by gender. Policymakers designing interventions to improve learning may want to account for gender-specific constraints and monitor progress by gender as a best practice, especially in contexts where gender gaps exist in learning outcomes.

One of the key challenges to understanding if and how learning interventions affect girls differently is that studies do not always report program impacts by gender. Hence, randomized evaluations should report gender differences in program impacts more consistently. While a small number of studies that reported program impacts by gender found statistically significant gender differences in impact, a majority did not, which might suggest that learning interventions have had gender-neutral effects or the differences were not large enough to be detected with the given sample sizes. Gender-neutral effects might lead to the persistence or exacerbation of gender gaps in cases where gender inequalities in learning exist before program implementation. Whenever possible, policymakers should consider potential different effects by gender while designing programs to improve learning and to ensure that learning interventions benefit all genders.

Two studies suggest that program design features that support girls’ gender-specific needs might be important to improve learning among girls [3][4]. In Bangladesh, compared to working with random peers, learning in groups with friends increased math test scores by 0.4 standard deviations for disadvantaged girls, who had low test scores before the intervention, but had no significant impacts on boys’ learning outcomes [3]. In Pakistan, a video-based instruction program increased the likelihood of a school visit by parents of boys and boys’ educational aspirations, with no changes for parents of girls or girls themselves, perhaps because 21 of the 22 subject experts in the teaching videos were male [4]. This is consistent with the evidence on gender quotas from India, which suggests that the presence of role models can improve girls’ aspirations and parents’ aspirations for girls [5].

Two studies indicate that some aspects of program implementation prevented programs from benefiting one gender [6][7]. In Peru, an innovative program to teach science at public primary schools using LEGO kits improved test scores for boys but not for girls, accentuating gender inequalities.  Anecdotally, during classroom visits, researchers observed that the LEGO kits, which were limited in number (one per class), may have been monopolized by boys [6]. In another study in Peru, the effects of a targeted remedial education program were entirely driven by boys and created a gender gap in test scores [7]. Boys and girls were equally likely to attend tutoring sessions and had comparable levels of achievement in tests before program implementation. Researchers conjectured that gender differences in impact could have been a result of preferential treatment afforded to boys by tutors or boys’ greater engagement in small group tutorials.

Further, one study indicates that interventions that address gender-specific barriers to education attainment faced by girls can benefit girls more and shrink existing gender gaps in learning [8]. In Afghanistan, creating schools in areas without access to formal government schools increased girls’ school enrollment and test scores [8]. In under a year , the creation of schools increased test scores by 0.66 standard deviations for girls and 0.41 standard deviations for boys , reducing the gender gap in average test scores by a third.  Researchers noted that distance from school, a barrier that the intervention helped overcome, was gender specific since cultural norms in Afghanistan restricted women’s and girls’ ability to travel long distances.

The notion that gender might influence the impacts of programs aligns with a finding from J-PAL’s literature review on women’s agency, which highlighted that gender norms might moderate or even block program impacts on women and girls (regardless of whether gender dynamics are taken into account in the design of a program). Thus, in the presence of gender-specific barriers, gender-neutral programs to improve learning may not benefit girls without gender-specific targets and outcomes . As a best practice, policymakers should consider the role that gender plays when designing programs to improve learning.

In some cases, the number of participants in the study may have been too small to detect statistically significant gender differences in program impact. Most studies also found that the magnitude of the gender difference in impact was relatively small: only eight studies found that the magnitude of the impact on boys was at least twice that on girls, in at least one test.

Although most programs had gender-neutral impacts, in cases where the program’s impacts were different by gender, girls often benefited more. Nine out of 54 studies found statistically significant differences in program impacts between girls and boys [3][6][7][8][12][13][14][15][16]. In six out of these nine studies, girls benefited more than boys. For example, in Uganda, an innovative teaching intervention consisting of a five-step approach to reading instruction for early grade children impacted learning for girls more than it did for boys, closing a gender gap in test scores[12]. The program increased oral literacy scores by 0.14 and 0.22 standard deviations for boys and girls, respectively, closing an existing gender gap of less than 0.1 standard deviations. However, the program had gender-neutral effects on written literacy and numeracy scores.  In Tanzania, combining unconditional grants to schools with teacher incentives based on student performance had positive impacts on all students but impacted disadvantaged students, such as girls and students with lower initial test scores, more [14]. The combined intervention impacted girls’ composite test scores (math and language) by 0.10 standard deviations more than boys’ scores. Similarly, a computer-assisted learning program in China improved test scores more for girls than boys in the third grade, but the gender differences disappeared in the long term. Further, the program did not have different impacts by gender among fifth-grade students [13].

To elucidate gender differences in the impact of programs designed to improve learning, studies should report gender differences more consistently. Overall, many studies do not consistently report gender disaggregated results, making it more difficult to learn which programs are most effective at promoting equal learning opportunities for girls. Only half of all studies that measured learning outcomes initially analyzed for this policy insight also reported gender disaggregated results. Most studies did not report whether a gender gap in learning existed prior to program implementation or if the program created, exacerbated, or helped overcome existing gender gaps. Researchers and policymakers implementing interventions to improve learning should track progress by gender consistently in order to identify situations where only one gender is benefiting and to modify the intervention design to prevent either gender from being left behind. In contexts where there are gender gaps in learning, policymakers should design interventions such that they benefit the disadvantaged gender more to help overcome the gender gap.