While rates of school access and enrollment in low- and middle-income countries have increased dramatically over the past two decades, in some cases these efforts have also led to classroom overcrowding due to an insufficient amount of teachers. Researchers evaluated the impact of hiring extra contract teachers in primary schools in India on student learning. Results show that students in schools with an extra contract teacher performed significantly better than those in comparison schools in both math and language areas. Evidence also suggests that contract teachers in this context faced stronger incentives to perform well than regular teachers.

Over the past two decades, attempts to achieve Education for All (EFA) goals has led to dynamic improvements in school access and enrollment for many low- and middle-income countries, but has also created difficulties with regards to maintaining and improving school quality. Increased primary school enrollment has, in some areas, resulted in classroom overcrowding, which can negatively impact student learning. However, recruiting enough teachers and posting them in areas where they are needed remains a persistent problem. The challenge is both fiscal (since teacher salaries account for the largest component of education spending) and logistical (since teachers are less willing to be deployed to underserved and remote areas where their need is the greatest).

Governments in several low- and middle-income countries have in many places responded to this challenge by staffing unfilled teaching positions with locally-hired contract teachers who are not civil service employees. These teachers are hired locally on renewable contracts, tend to be less qualified and less trained, and are typically paid much lower salaries. This has been a controversial policy, with advocates citing higher teacher accountability and lower costs of contract teachers, and critics arguing that using untrained teachers would not improve learning and would de-professionalize education in the long-run.

Contract teacher programs in India were originally initiated as a way to staff remote and underserved areas, however, their use has since expanded due to fiscal pressures. For example, in the large Indian states of Uttar Pradesh, Bihar, and Madhya Pradesh, over 25 percent of primary school teachers are on short-term contracts, rather than regular civil service teachers.

Andhra Pradesh (AP) is the fifth largest state in India, with a population of over eighty million, 73 percent of whom live in rural areas. There are a total of over 60,000 government-run schools in AP and over 80 percent of children in rural areas attend such schools. All regular teachers are employed by the state and their salary is mostly determined by experience, with no component based on performance. These salaries and benefits comprise over 90 percent of expenditure on primary education in AP. Contract teachers, on the other hand, are generally hired at the school level. They usually have either a high school or college degree, but typically have no formal teacher training. Their contracts are renewed annually and they are not protected by any civil-service rules. With a salary of INR 1,000-1,500 (Indian rupees) per month, they are paid less than one fifth the average salary of a regular government teacher. 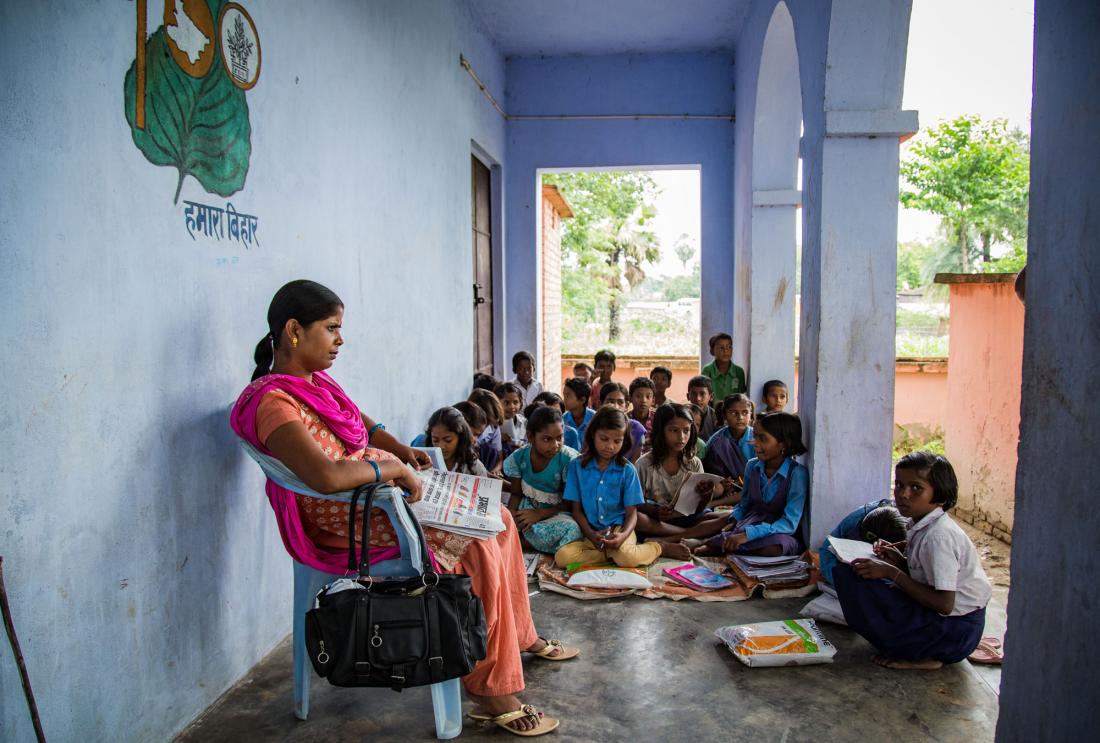 Schools that were selected for the program were informed in a letter from the District administration that they had been granted authorization and funds to hire an additional contract teacher, and that they were expected to follow the normal procedures and guidelines for hiring such a teacher. The teachers were allocated to the school, allowing the school administrators, not the state, the ability to choose the teacher’s specific grade and role most tailored to their needs. Since this is the typical procedure for hiring and using contract teachers, the intervention was designed to be an “as is” evaluation of the contract teacher policy of the Government of Andhra Pradesh.

Researchers gathered data from independent learning assessments in math and language conducted at the beginning of the study and two years later. Data was also collected from regular unannounced “tracking surveys” made by staff of the Azim Premji Foundation to measure variables such as teacher attendance and teaching activity. Researchers also collected data on private school teachers in the same districts for additional context on teacher labor markets.

At the end of two years, students in schools with an extra contract teacher performed significantly better than those in comparison schools by 0.16 and 0.15 standard deviations in math and language test scores respectively. While the modal assignment for contract teachers was to the third grade, the greatest test score gains were found for treatment students in the first grade in both years of the program. The program also led to a significant reduction in class size for all grades in both years of the program, suggesting that smaller class sizes matter most in younger grades.

The experiment establishes that the impact of contract teachers is positive. The authors then use the data collected to compare non-experimental estimates of the relative effectiveness of regular and contract teachers. They use four different methods (two at the school-level and two at the student level) and two different estimation samples (the full sample of 200 schools and the intervention sample of 100 schools) and find in all eight estimates that contract teachers appear to be as effective as regular teachers even though they are less qualified and paid much lower salaries.

Opponents of the use of contract teachers worry that their expanded use may lead to a permanent second-class citizenry of contract teachers, which in the long-run will erode the professional spirit of teaching and shift the composition of the teacher stock away from trained teachers towards untrained teachers. One possible course of action is to hire all new teachers as contract teachers, and measure their performance on a regular basis. The most effective teachers could get promoted to regular teachers over time, while the least effective teachers would not have their contracts renewed. Such a system would resemble a “tenure track faculty” model as opposed to an “adjunct faculty” model and would create a teacher career ladder based on continuous performance.