The quality of healthcare and other public services depends critically on the efforts of those who provide these services, but little is known about how to recruit the highest-performing public service providers. The Government of Zambia partnered with researchers to test the effect of two different recruitment strategies for a newly created healthcare position, the Community Health Assistant (CHA). One strategy emphasized career opportunities and the other emphasized the contributions one could make in the community. The evaluation found that emphasizing opportunities for career advancement led to the selection of CHAs who were more qualified, had similar community service motivation, performed better on the job, and significantly improved health practices and outcomes in their communities.

Over half of the world’s population lacks access to quality health services. The availability and quality of healthcare and other public services depends critically on the efforts of public service providers. Many factors can motivate these service providers to do their job well. For example, they may be motivated by the opportunity to have a positive impact in their communities. As such, recruiting individuals with a strong community service orientation may improve service quality. Alternatively, emphasizing career opportunities may attract more ambitious or qualified candidates. However, career-driven applicants may care less about having a positive impact than their socially-driven counterparts. How does emphasizing professional opportunities versus community benefits impact recruitment and subsequent job performance in public service delivery?

In 2010, the Government of Zambia created the Community Health Assistant (CHA) position to improve healthcare in remote areas of the country. At the time, rural areas had limited healthcare services, with an average of 1.5 health workers per health post (intended to serve approximately 3,500 people) and worse health outcomes compared to urban areas. For example, the infant and maternal mortality rates in 2010 were both approximately 20 percent higher in rural areas than in urban areas.

The new CHA position was designed as part of the Zambian civil service, offering health workers an entry point to higher-ranked positions within the government. CHAs were recruited from their home communities, creating formal jobs for a pre-existing group of informal community health workers who volunteered with non-profit organizations. The recruitment process involves the solicitation of applications using recruitment posters posted in public places in the local community, followed by in-person interviews of qualified applicants by a community-based selection panel. Once hired, CHAs receive a year of formal training at a centralized training school before returning to their communities to work. The majority of their work consists of household visits with a focus on maternal and child health, but they also assist staff at the local health post and organize community health education meetings.

As originally envisioned, after two years of service, CHAs are eligible for promotion to a higher-ranking position within the health system. They can also acquire additional training––paid for by the government ––to become higher ranking and better-paid healthcare providers. 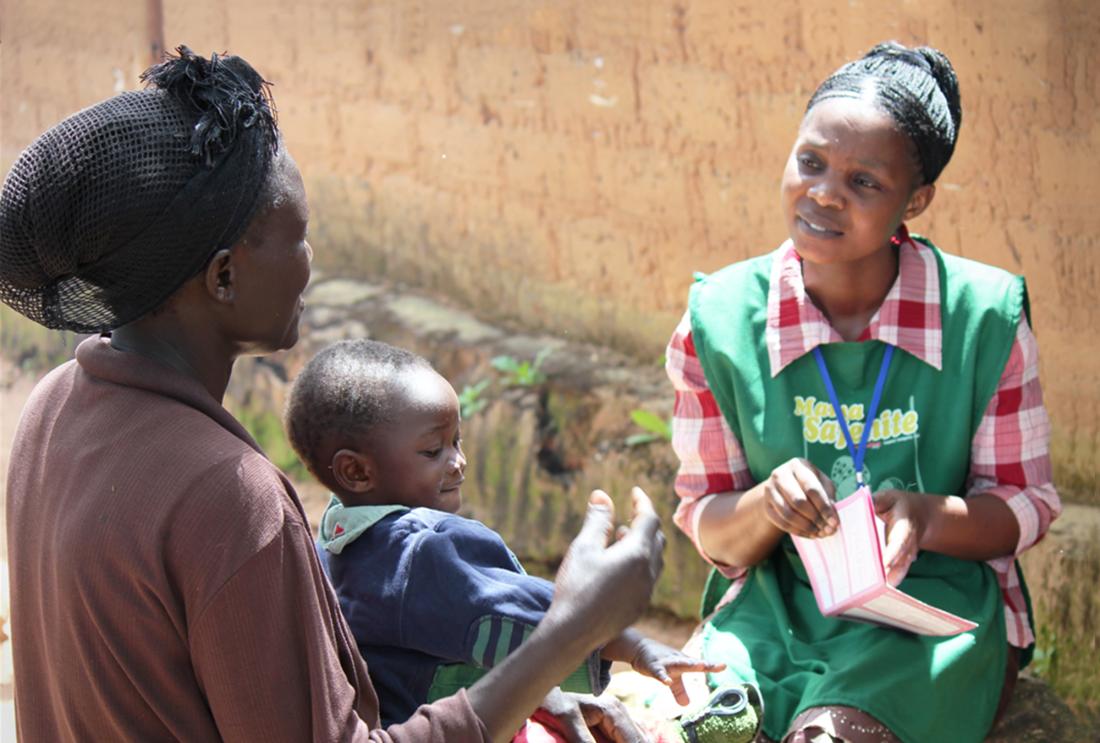 Community health worker talks to a patient in Zambia

Researchers partnered with the Zambian Ministry of Health to conduct a randomized evaluation of the impact of career-focused versus socially-focused CHA recruitment on recruitment outcomes, job performance, and subsequent health outcomes. In 2010, the program’s first year, the Ministry aimed to recruit two CHAs from each of 167 rural communities across 48 districts in Zambia. Researchers randomly assigned each district to one of two groups: 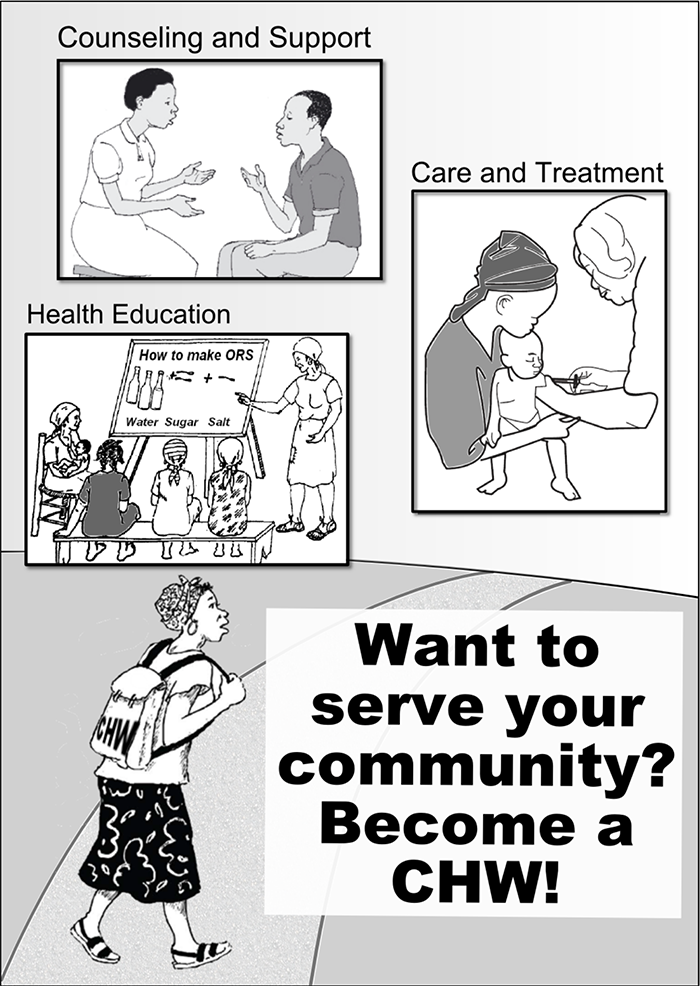 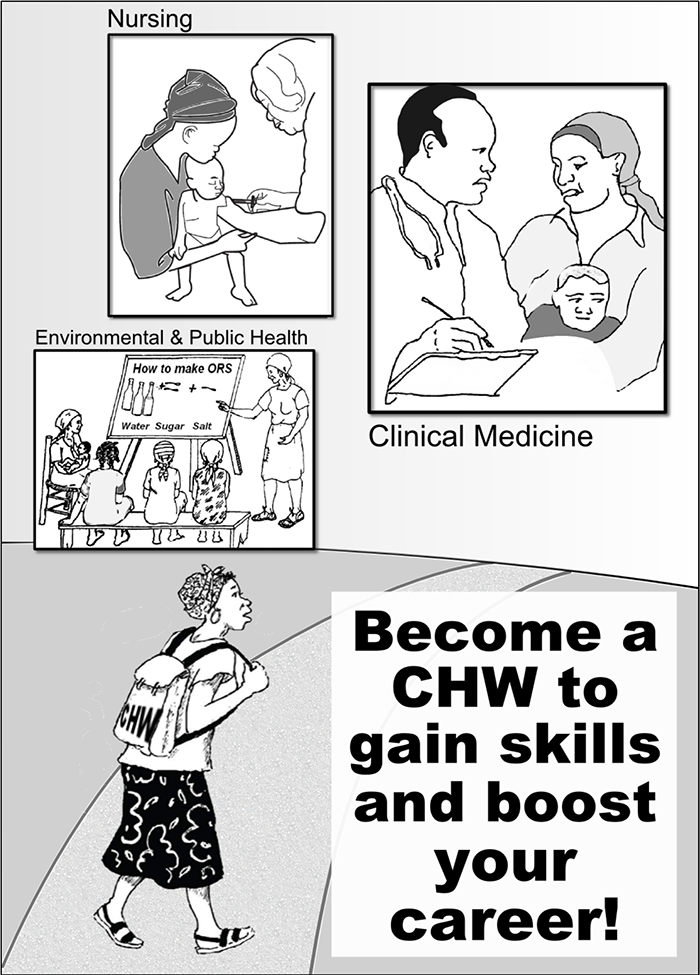 Other than the differing emphasis on social or career benefits, the recruitment materials, selection processes, and actual benefits such as salary and career opportunities were identical. CHA positions were open to Zambian nationals aged 18-45 with a high school diploma and passing grades on at least two subjects on their secondary school graduation exams.

Researchers analyzed CHAs’ performance over the course of 18 months by tracking the number of home visits and community meetings each CHA conducted. Researchers also used health facility administrative data from the Ministry of Health and conducted a nationwide household survey of randomly selected households in CHA communities to gather information on health facility utilization and maternal and child health outcomes, including immunization rates, breastfeeding, and child nutrition.

Overall, CHAs hired in the career opportunities group were more qualified and career-oriented and, importantly, had equal desire to improve their communities as CHAs hired in the social benefits group. CHAs in the career opportunities group subsequently performed better on the job, conducting more home visits and improving health behaviors and outcomes across a wide variety of domains.

Watch Nava Ashraf and Oriana Bandiera discuss this evaluation in a video produced by the IGC:

Applicant pool and selection: There was no difference in community service orientation (i.e., prosociality) between the two groups of final selected CHAs. However, the applicant pools differed: The career-oriented recruitment strategy attracted applicants who had higher skills but lower prosociality than their counterparts. During the selection process, however, the community panels selected the highest-skilled applicants in both intervention groups. These highly skilled applicants were also the most prosocial, which meant no difference in prosociality existed in the groups of selected CHAs.

Why were the highest-skilled applicants also the most motivated to help their communities? This may follow from the fact that higher-skilled applicants have better outside employment options; hence, only the truly socially motivated among them apply for a position that requires them to remain in their home communities, where employment opportunities are more limited. This positive correlation between ability and motivation to help one’s community at the top of the applicant pool is likely to exist in other public sector job settings in which the returns to ability are lower than in the private sector.

Ability: Similar to the overall applicant pool, CHAs hired from the career opportunities group were more skilled, as evidenced by higher scores on secondary school graduation exams, higher scores during the one-year CHA training course, and more prior experience as a community health worker.

Community service and career goals: CHAs hired from the career opportunities group were more interested in job advancement: 25 percent aspired to become a higher-ranking health professional in the next five to ten years compared to 19 percent of those in the social benefits group. Importantly, however, because the most skilled applicants in the career-oriented recruitment group were also the most prosocial, and these were the applicants selected, CHAs hired from the career opportunities group had equal desire to improve their communities compared to those recruited in the social benefits group, thus allaying the concern that advertising professional opportunities may lead to the hiring of workers who do not care about community service.

Performance: During the first eighteen months of work, the average CHA recruited from the career opportunities group conducted 23 household visits per month, a 29 percent increase compared to the average of 18 household visits per month in the social benefits group. CHAs in the career opportunities group also organized an average of 37 community meetings in eighteen months, 84 percent more than the twenty meetings organized in the social benefits group.

Retention: Recruiting CHAs by focusing on career opportunities had no significant impact on retention. After eighteen months of service, approximately 18 percent had stopped working in both groups.

Policy impact: In 2018, the World Health Organization issued a new guideline citing this research in a recommendation that a career ladder be offered to practicing CHWs. The guideline on health system support to optimize community health worker programs cites the study in making the following recommendation: "WHO suggests that a career ladder should be offered to practicing CHWs, recognizing that further education and career development are linked to selection criteria, duration and contents of pre-service education, competency-based certification, duration of service and performance review." Read the full guideline here.