Non-profit and public organizations increasingly rely on the services of community members to deliver and promote health goods. Community member involvement in the distribution of health goods can have significant benefits for the community at large, but only if the commitment and motivation of volunteers is sustainable. While there is a significant literature on the role of incentives in the commercial sphere, there is little evidence on how various compensation schemes affect motivation when a task has a social benefit. Standard financial incentives that increase motivation in the commercial sphere may actually crowd-out intrinsic motivation for socially beneficial tasks, which may reduce overall performance. Alternatively, financial incentives may have little impact on performance if individuals drawn to mission-driven organizations place little weight on financial gains. Thus, the question of how to compensate community agents remains a challenge for many non-profit employers who hope to leverage this valuable community resource.

Zambia has one of the world’s highest adult HIV prevalence rates at 14.3 percent. It is estimated that in 2009, 1 million Zambians were living with HIV and 45,000 died of HIV related causes. Although male and female condoms are currently the only protection methods available for HIV, condom use is low and its social acceptability remains problematic. The female condom may be particularly important in the public health community, as it is the only female-controlled tool for HIV/AIDS and other STI prevention. However, like many new technologies, a lack of information about correct use, commonly held misconceptions about the product, and insufficient distribution networks hinder uptake and use of the female condom. This evaluation seeks to investigate the use of hair stylists as private sector channels for the distribution of female condoms. 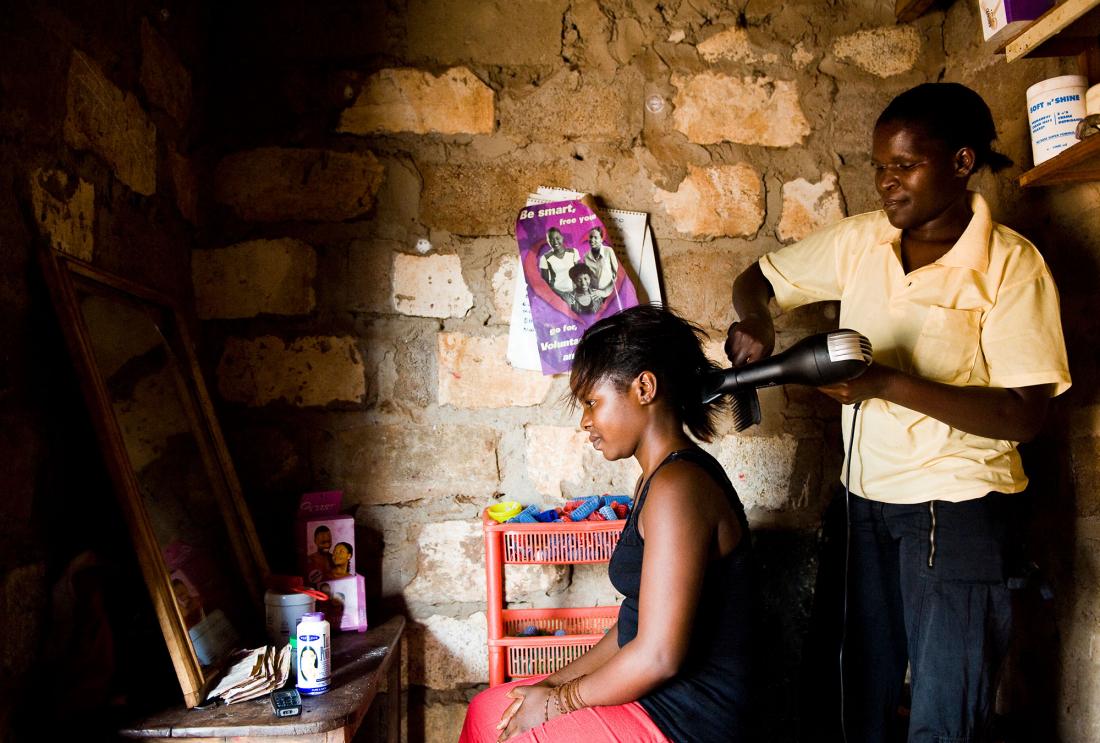 Researchers partnered with Society for Family Health (SFH) to evaluate their female condom distribution program in Lusaka. SFH’s strategy uses social marketing to promote and distribute health products via community-based agents with connections to the local community. In this case, the community agents were hairdressers and barbers in Lusaka, who were asked to promote female condoms through their shops. Hairstylists were identified as ideal promoters of female condoms both because the familiarity between the stylist and the client creates the potential for successful targeting of female condom to “at risk” customers, and because during the period that a client is in the salon, he or she is a captive audience, allowing the stylist to provide information about the condom.

The study tested the effect of both financial and non-financial rewards on the selection and performance of agents engaged in promoting female condoms by randomly assigning 1,222 hair stylists to one of four groups:

Several key features served to identify the effect of different incentive schemes on performance and the underlying mechanisms: (1) Information was collected on all agents who could have applied for the job, to test whether different incentive contracts attract different agents type; (2) Agents’ performance was measured monthly over a one year horizon, to test whether changes in behavior may be due to a novelty effect; and (3) A modified altruism (dictator) game yielded direct and quantitative measure of the agents’ motivation for the cause, and tested whether financial incentives reduced performance by crowding out intrinsic motivation.

Condom Sales: Non-financial incentives were the most effective at generating female condom sales. Hair stylists in the “star” treatment sold twice as many packs of condoms as agents in any other group. In other words, the likelihood of selling at least one pack was 11.4 percentage points higher for agents in the star treatment; this represents a 31 percent increase over the mean of the control group. Agents in the high and low financial reward treatments, in contrast, were not more likely to sell at least one pack than agents in the control group. However, the sales levels overall were generally low.

Contrary to existing evidence, researchers found no evidence that financial incentives crowded out intrinsic motivation. On the contrary, high financial rewards were more effective for agents who scored higher on a measure of motivation.