Last updated:
Despite their positive results in the lab, biomass cookstoves designed to reduce smoke exposure and/or increase fuel efficiency did not substantially improve health in several randomized evaluations in the real world. Many people did not want to buy or maintain them, did not use them enough, and continued to use their old stoves. Researchers found some positive effects, including reductions in household fuel consumption and costs, in two evaluations where stoves were better adapted to people’s cooking habits. 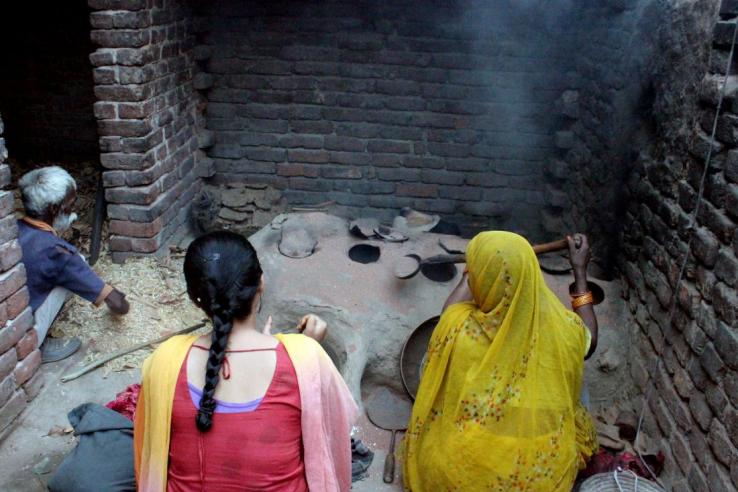 As of 2018, the WHO reports that nearly 4 million people, often women and children in developing countries, die prematurely each year from illnesses attributable to household air pollution from cooking with solid biomass fuels like wood, dung, and charcoal, which almost 3 billion people around the world use [1]. These fuels emit soot, also known as black carbon—a pollutant that speeds up climate change. Cookstoves that are designed to direct smoke away from users, generate fewer harmful emissions, or use less fuel are often proposed as potential solutions to this health and environmental challenge. More efficient stoves could also help people save time and money collecting or buying fuel.

Yet, in eight randomized evaluations of various types of biomass cookstoves that were designed to reduce smoke exposure or fuel use, five found they had little impact on measured outcomes including fuel consumption, smoke exposure, and/or health. In most studies, people used the new stoves infrequently and for a short period of time and continued to use their older, dirtier stoves too. Several of the cookstoves tested were not well adapted to people’s cooking habits or preferences or required a lot of maintenance. These nonmonetary costs of switching stoves likely dampened use. In two studies that found high rates of stove use and significant reductions in fuel consumption, the energy efficient stoves were better adapted to people’s cooking habits and reduced their fuel costs.

The price of many stoves on the market today may also dissuade low-income consumers from purchasing them. Four other randomized evaluations found that demand for nontraditional biomass cookstoves was low at retail prices of US$6–12 without discounts or the chance to buy stoves on credit.

Despite a great deal of investment in improved biomass cookstoves, there is little evidence that they are delivering their intended health benefits, making the case for testing different approaches to reducing the health burden of biomass cooking before devoting more resources to the same technologies. Specifically, there is a clear case for testing stoves or interventions that help people switch to cleaner fuels (e.g., liquid petroleum gas (LPG), electricity) to reduce exposure to indoor air pollution.

Several randomized evaluations of cookstoves in real-world settings found little impacts on health, smoke exposure, or fuel use. The eight evaluations tested several different types of cookstoves with a wide range of features (Table 2 1). They all used biomass fuels (e.g., wood, dung, charcoal). Four of the stoves were designed to redirect smoke, while the other four were primarily designed to be more fuel efficient but did not redirect smoke. Six studies gave the new stoves to households for free or at a highly subsidized price, while two sold the stove to households at either full or discounted prices and provided credit to help them purchase the stoves.

Of the eight studies that measured one or more health outcomes, smoke exposure, and/or household air pollution concentrations, five found negligible or no effects (Table 1). Three of the six studies that reported environmental outcomes found a significant reduction in fuel consumption, but one of these effects was small (Uganda) (Table 1).

Five studies found that the stoves had little impact on health or fuel use [2] [3] [4] [5] [6] [7]. In a four-year study in India, researchers found that a clay chimney stove that diverted smoke away from the user led to a small reduction in smoke exposure for primary cooks in the first year, yet it had no impacts on smoke exposure, health, or fuel use in the next three years [2].  A large-scale study in Malawi that gave households two cleaner-burning biomass stoves found no significant reduction in pneumonia among young children after two years [3] and suggestive evidence that the stoves did not affect adult respiratory health outcomes [4]. In Mexico, a chimney stove that directed smoke outside the house had no effect on health overall [5]. In a short-term study of a clay chimney stove in Ghana, researchers found improvements in self-reported eye and respiratory symptoms, but they conclude these measures may be unreliable given that they find no effect on smoke exposure [6]. In Uganda, households that purchased a fuel-efficient biomass stove and received a second one for free saw small reductions in fuel use and household air pollution in the short run [7]. However, these effects became near zero once researchers adjusted for the fact that research participants used their new stoves more often when they knew they were being observed by the research team.

Three studies found more positive effects. In Senegal, one year after receiving a more fuel-efficient portable cookstove, people reported fewer symptoms of eye infections and respiratory disease and also reported using less fuel [8]. In Kenya, an energy efficient biomass stove reduced household charcoal consumption by 39 percent after two months and people reported improved respiratory health, with longer-term results forthcoming [9]. Neither of these studies measured health biomarkers or smoke exposure directly. In an 18-month study of a chimney stove in Guatemala, researchers found substantial reductions in smoke exposure for women and children and mixed effects on a wide range of health outcomes [10]. In this study, the research team visited participating households every week to ensure that they were using the new stove and provided free repair services [11]. These close-to-laboratory conditions can be useful in providing an upper bound on the impacts of a stove, but they do not reflect real-world conditions where people make use and maintenance decisions on their own.

In many cases, people did not use the new cookstoves consistently and continued to use their old stoves too. In India, households initially only cooked about one-quarter of their meals on the new stove and use fell substantially after the first year [2]. Use was also low in Ghana, Malawi, Mexico, and Uganda, and many people in these five studies continued to use traditional stoves too [3] [5] [6] [7].

Several of these studies note the stoves were not well adapted to people’s cooking preferences or required a lot of maintenance and that more extensive user testing and feedback may help catch these issues. For instance, in Ghana the stove could not accommodate the large cooking pots that many people typically used [6]. In India, the new stove broke more frequently than traditional stoves and people did not maintain them over time [2]. In Malawi, failures in the stove’s rechargeable batteries were common and households used the free repair services provided during the study an average of three times over two years [3].

Even though the stoves were given to people for free or at a reduced price, these nonmonetary costs of switching to a new stove were high—likely limiting regular and persistent use. Irrespective of these subpar features, it is also not surprising that people continued to use their old stoves given that people in several studies reported using multiple pots at the same time when cooking a meal.

In contrast, improved stove use was much higher in Senegal and Kenya, where researchers note that the new stoves were both well adapted to people’s cooking preferences and habits and saved them time and money buying or collecting fuel [8] [9]. In Senegal, 85 percent of households still used their new cookstove as their primary stove after one year, most households continued to use the stove until it reached the designated end of its life, and many people switched to cooking outside [8]. The authors conclude the health improvements were driven by both the stove and an increase in cooking outside. In Kenya, where 60 percent of households adopted the new stove as their primary stove two months after purchasing it, researchers note that the new stove required no behavior change and used the same exact fuel and cooking process as their traditional stoves [9]. Stove use was also high in Guatemala, where it was closely monitored by the research team [10].

Demand for nontraditional biomass cookstoves was low without financing options in four other studies. Alternative cookstove models that avoid some of the negative features of the cookstoves tested in Ghana, India, Malawi, and Mexico may be more expensive, which may screen out low-income consumers who cook with solid fuels.

Three other randomized evaluations in Bangladesh, India, and Uganda found demand for cookstoves designed to reduce smoke was low at retail prices [11] [12] [13]. When consumers were offered discounts or the chance to buy stoves on credit, demand increased in India [12] and Uganda [13] but not in Bangladesh [11]. These results mirror a large body of evidence showing that demand for preventive health products is often low even at subsidized prices. In Bangladesh, only 2 percent of people bought a US$11 chimney stove and cutting the price in half did not increase orders [11]. People cared more about features like fuel costs and cooking time than smoke, and while women had stronger preferences for cleaner stoves, they lacked decision-making power at home to make purchases [11] [14]. Stove adoption decreased further in a follow-up once people gained more experience with the technology [15].

In Uganda, only 4 percent of people bought a more fuel-efficient stove between US$6–10, but providing a free trial and the chance to pay in weekly installments substantially increased purchases [13]. Similarly, in Kenya, providing a three-month loan to finance stove purchases doubled the price people were willing to pay for an energy efficient stove from US$12 to US$25 [9]. In Senegal, households were willing to pay US$11, on average, for the same biomass stove they were given for free six years earlier [16]. The offer included two months of interest-free financing.  In India, only 8 percent of people bought an improved biomass stove at near full price, even with the chance to pay in installments, but offering a 33 percent rebate increased demand to 25 percent. Demand for electric stoves was more than twice as high as demand for improved biomass stoves in this setting [12].

For cookstoves to succeed at scale, providing people credit to help buy them and identifying models that are more affordable, desirable to use, help people save on fuel costs, and are easy to maintain and repair relative to traditional stoves is vital. There is also a strong case for evaluating other potential solutions to this health and environmental challenge beyond improved biomass stoves, like helping people to switch to stoves that use cleaner fuels like LPG or electricity.

Table  1 .  Study details and main results on stove use, fuel use, and health indicators

*This estimate may be biased by differential attrition between the treatment and comparison group, as the response rate for this measure was only 54 percent in the treatment group and 71 percent in the control group. For more see: McCracken, John P., Kirk R. Smith, Anaite Diaz, Murray A. Mittleman, and Joel Schwartz. 2007.“Chimney Stove Intervention to Reduce Long-term Wood Smoke Exposure Lowers Blood Pressure among Guatemalan Women.” Environmental Health Perspectives 115 (7): 996–1001; and Duflo et al. 2016 pp. 108.

Footnotes
1.
Table 1 and Table 2 only include studies that measured environmental and health outcomes, in addition to stove adoption.
Citations
1.

Nightingale R, Lesosky M, Flitz G, Rylance SJ, Meghji J, Burney P, Balmes J, and Mortimer K. 2018. "Non-Communicable Respiratory Disease and Air Pollution Exposure in Malawi (CAPS): A Cross-Sectional Study." American Journal of Respiratory and Critical Care Medicine, 199, no. 5. Research Paper. The authors note the results on adult respiratory health are suggestive and exploratory due to the limited number of adults they surveyed who were also in the experimental sample and the limited time between the stove intervention and outcome assessment.