Last updated:
Pay-for-performance incentive programs for health care workers reward providers based on measurable performance indicators. In many low- and middle-income countries, providing performance-based pay in addition to base pay can help to improve health provider performance on well-chosen targeted indicators relative to providing only base pay. 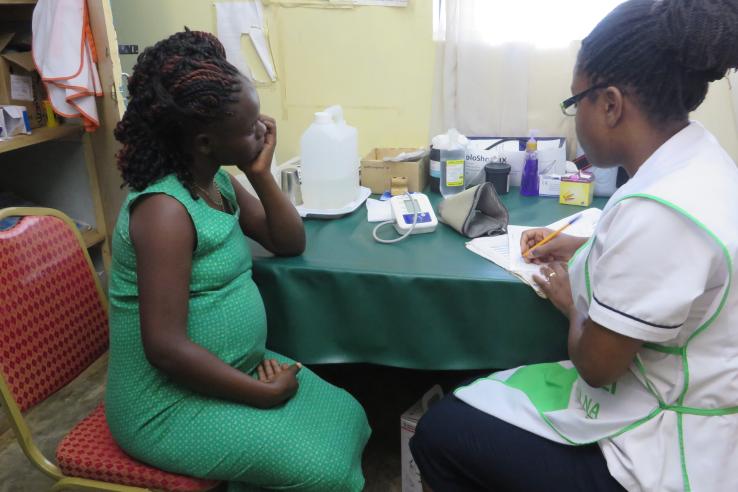 Life expectancy varies substantially around the world, with a 2019 estimate showing that people in low-income countries on average die 18 years sooner than their counterparts in high-income countries.1 Improving access to high-quality health services for underserved populations is crucial, and an important element of this is strengthening health worker capacity and performance. In contexts where health workers are trained but performance remains low, many policymakers have implemented pay-for-performance (P4P) incentive programs to reward providers based on measurable performance indicators. P4P covers programs that provide an incentive, typically paid on top of fixed existing remuneration, for reaching a prespecified goal, such as the number of home visits made, the number of patients seen, or health outcomes of patients. Figure 1 highlights how P4P programs may improve the performance of existing workers by directly incentivizing good performance. Initial evidence suggests performance pay may also attract higher candidates to become health workers, although more research is needed. Improved performance may also translate into improved health outcomes.

While P4P programs are often effective at improving performance and health outcomes, what inputs and outcomes are incentivized requires careful consideration. The goal of these programs is to improve health outcomes, and health workers may not always have information on what inputs to prioritize to achieve these targeted outcomes. While health worker training is paramount, incentivizing specific inputs or activities may remind workers of this information. From a practical perspective, inputs such as the number of patients seen can be easier to measure and monitor than many health outcomes. However, whether focusing on inputs is adequate for improving health outcomes is a key consideration. P4P may be most impactful in health systems with high levels of transparency and accountability and when accompanied by interventions to generate demand for services,2 such as cash transfers and information campaigns.

The rationale of P4P programs is that they can incentivize behaviors that facilitate the achievement of targeted outcomes. Seventeen [1] [2] [4] [5] [6] [7] [8] [11] [12] [13] [14] [15] [16] [18] [19] [20] [21] of the 21 studies found that health workers receiving performance-based pay performed better than workers receiving fixed wages on some or all outcomes measured. These outcomes included health outcomes for patients, health service utilization rates by the local community, and measures of health worker performance such as correct medications being prescribed, reduction in stockouts, and patient satisfaction.

A study in Sierra Leone tested the impact of providing 2,000 leones (US$0.23 at the time of the evaluation) to CHWs per health visit completed on top of their fixed wages relative to simply providing fixed wages. Workers who did not receive the performance-based pay carried out 5.3 visits per household over a six-month period as opposed to 7.4 visits for workers who did receive the performance-based pay, a 40 percent increase.[7]

Exploring the interactions between workers in different layers of the organization, and the optimal allocation of incentives between them, is important. However, poor monitoring or actions by superiors that undermine the incentive structure can render a P4P program ineffective.

Health systems are often hierarchical, and the behavior of others beyond the health worker may also be important considerations. A program in Sierra Leone studied the effects of introducing a P4P scheme that rewarded the worker and their supervisor for each health visit completed. Health visits increased by 63 percent compared to the control group. This effect was 61 percent larger than when the incentives were offered either to the worker or the supervisor alone, which was explained by complementarities in effort between workers and supervisor.[7]

Ensuring accurate monitoring and that the incentive structure is not undermined are also important. A program in India implemented monitoring systems to track nurse attendance at clinics using time- and date-stamping machines that were locked into a caddy and password protected to prevent tampering. The administration also installed punitive pay incentives in which nurses who were absent more than 50 percent of the time on monitored days would have their pay reduced, and those absent for more than 50 percent of the time on monitored days for a second month would be suspended from government service. While this program initially increased attendance by 15 percentage points, administrators eventually began to excuse absences and nurses may have tampered with the monitoring systems. Eventually, there was minimal difference in attendance between nurses who were and were not monitored.[3]

Ensuring that incentivized activities are within the health worker’s direct control may be important.

P4P programs can incentivize health workers based on various indicators. CHWs, whose roles typically focus on liaising between community members and primary care clinics, are often incentivized based on performance and service utilization metrics, such as the number of home visits made or the number of children weighed to track malnutrition. Formally trained health workers, such as doctors and nurses, may also be incentivized according to performance metrics, such as patient satisfaction or the volume of services provided.
Twelve studies [1] [5] [6] [7] [8] [12] [13] [14] [15] [16] [18] [21] provided health worker incentives based in part or wholly on specific metrics of performance within the worker’s control, such as accurate diagnosis, meeting predetermined standards of care, and prescription practices. Targeted outcomes improved in all but one study.

Six other studies [2] [4] [9] [10] [11] [17] provided health worker incentives based on service utilization, which is often less directly in the control of the health service provider. Targeted outcomes improved in half of the studies [2] [4] [11]. One study in the Democratic Republic of Congo worsened service utilization rates. Health workers were more present, conducted more outreach activities, and offered lower user fees, yet health visits declined. Additional analysis found that this may have been due to the community perceiving the services as lower quality due to the extensive outreach. Furthermore, health workers receiving performance pay eventually became less intrinsically motivated with their jobs.[10] This may suggest a need to complement increased outreach with community sensitization activities.

It may be important to directly incentivize patient health outcomes for outcomes to improve.

P4P programs aim to improve patient health. A key question is whether to provide performance pay based on certain inputs or activities, as discussed before, or to do so based on patients’ health outcomes. While pay based on outcomes directly incentivizes the goal of the program, pay based on inputs can provide information to health workers on what activities to prioritize.

Some P4P programs reward each health worker according to their performance on prespecified outcomes. Others provide incentive pay to a group of health workers if the full group meets the prespecified target. It is unclear whether one type of incentivization leads to better outcomes as none of the studies considered here test the impact of the two against each other.

While providing individual incentives may allow health workers to have more control over their performance pay, group-based incentives may lead to overall shifts in behavior that improve targeted outcomes. For instance, a study in Argentina focused on the impact of incentivizing health workers based on early initiation of prenatal care. Health clinics received a 200 percent premium of a woman’s first prenatal care visit if the visit occurred before her 13th week of pregnancy. Clinics participating in the program increased early initiation of prenatal care by 34 percent relative to clinics that did not receive this premium. The average number of weeks a woman was pregnant at the time of her first prenatal care visit fell by about 1.5 weeks. Additional analysis found that clinics achieved these improvements by developing specific outreach strategies to find newly pregnant women and encourage them to start care early. The improved performance was maintained even after the premium was removed, consistent with the hypothesis that the one-time barriers to adopting new outreach strategies had prevented their adoption, as opposed to low returns. This suggests that temporary incentives may have been just as effective in that context as permanent incentives would have been to achieve lasting improvements.[4]

On the other hand, a program in the Philippines provided individual bonuses of 100 Philippine pesos (US$2.40 at the time of the evaluation) to medical workers at hospitals based on the quality of care provided. Improvements in staff performance reduced child wasting by nine percentage points [14].

Given that both individual- and group-based incentives have improved targeted outcomes, more research comparing the relative impacts of the two design features is important. In the meantime, policymakers could consider implementing the structure that seems most appropriate given their context.

Banerjee, Abhijit, Rachel Glennerster, and Esther Duflo. 2008. “Putting a Band-Aid on a Corpse: Incentives for Nurses in the Indian Public Health Care System.” Journal of the European Economic Association 6, no. 2–3: 487–500.

Dhaliwal, Iqbal and Rema Hanna. 2017. “The Devil Is in the Details: The Successes and Limitations of Bureaucratic Reform in India.” Journal of Development Economics 124: 1–21.

Quimbo, Stella, Natascha Wagner, Jhiedon Florentino, Orville Solon, and John Peabody. 2015. “Do Health Reforms to Improve Quality Have Long-Term Effects? Results of a Follow-Up on a Randomized Policy Experiment in the Philippines.” Health Economics 25, no. 2: 165–177.

Singh, Prakarsh and William A. Masters. 2017. “Impact of Caregiver Incentives on Child Health: Evidence from an Experiment with Anganwadi Workers in India.” Journal of Health Economics 55, no. 8: 219–231.