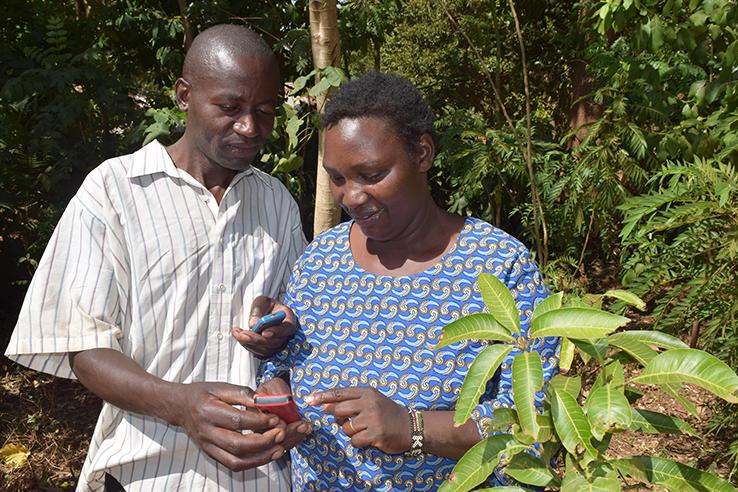 Globally, more than 570 million households farm small plots of land to earn income. Traditional agricultural extension models that provide in-person advice to smallholder farmers are expensive, difficult to scale, and do not deliver the customized and timely information farmers need to adopt potentially profitable farming practices. Research from India and Kenya has shown that mobile phone-based extension can be an efficient and cost-effective way to deliver tailored and timely agricultural information to farmers to promote behavior change that can increase farmers’ yields and incomes. Building on this evidence, Precision Agriculture for Development (PAD) was founded in 2016 with a mission to diffuse extension advisory and support smallholder farmers in low- and middle-income countries with information delivered via their mobile phones. PAD continues to use research and learning to scale—now reaching over 3.56 million farmers in nine countries with evidence-informed mobile extension services, as of the third quarter of 2020.

Traditional extension models are expensive, difficult to scale, and do not effectively deliver the customized, relevant, and timely information that smallholder farmers need to adopt farming practices that could increase their yields and profits.

Globally, more than 570 million households engage in smallholder farming as their core source of income according to the FAO.1 Many of these farmers live in poverty, growing only enough food for consumption, relying on inefficient and environmentally unsustainable practices that stagnate yields, and earning little income at market. Among other barriers (such as uninsured risks or a lack of credit), farmers may not have the information they need to adopt optimal farming practices and make management decisions that increase their profits.

In many settings, traditional and bottom-up approaches have both seen low accessibility and use by farmers and have shown limited improvements on farmer’s profits. Several challenges could explain this limited reach and impact. First, reaching remote communities can be difficult and costly, limiting extension agents’ engagement with farmers. Second, traditional extension often provides broad advice and focuses on common practices—this advice might be too generic to help farmers tackle their specific agricultural challenges. Similarly, traditional extension is rarely tailored to the level of education or technical understanding of a farmer, therefore farmers might struggle to understand information that is too complex. Third, farmers need to make decisions at specific times in the growing season, and traditional extension might not deliver information regularly or at the right time for farmers to use it.

Increased access to mobile phones and advances in data availability offer opportunities to improve on the traditional extension model by providing cheaper and more accessible ways of delivering tailored and timely agricultural information to smallholder farmers.

In Kenya, J-PAL affiliated professors Lorenzo Casaburi (Zurich), Michael Kremer (Chicago and co-founder of PAD), and Sendhil Mullainathan (Chicago Booth), together with Ravindra Ramrattan, partnered with Mumias Sugar Company (MSC) to send sugar cane farmers timely text messages to remind them of the agricultural tasks that should be performed at various points during the agricultural cycle. In the first season, yields increased by 3.3 tons per hectare (about 8 percent), with the largest gains among farmers who had no previous agronomy training and little interaction with company field staff prior to the roll out of the program. Researchers estimate that sending farmers information and advice through SMS increased company profits per farmer by US$43 and increased farmer income by US$54 on average, while the cost of sending messages amounted to only US$0.30 per farmer. In the second season, however, researchers found no impact, perhaps due to differing characteristics of the farmers participating, variations in the growing conditions across the two seasons, or management troubles ongoing at MSC.

In a separate evaluation, J-PAL affiliated professor Shawn Cole (Harvard Business School and co-founder of PAD), together with A. Nilesh Fernando (Notre Dame) partnered with the Development Support Centre in the Indian state of Gujarat to evaluate the demand for and impact of a two-way, customized mobile-phone based agricultural advisory service for cotton farmers. The service allowed farmers to call an advice hotline, browse responses to other farmers’ questions, and receive weekly automated information and tips. Nearly 90 percent of farmers with access to the advisory hotline called in for agricultural information over the two-year evaluation period, illustrating that farmers found the service useful. Three-quarters of farmers with access to the service also used mobile phone-based information to make agricultural decisions, compared to 9 percent in the comparison group, an increase of 66 percentage points. While researchers did not find systematic impacts on yields or profits, farmers did change their input decisions in cotton cultivation and, in particular, their seed choices in line with recommendations from the advisory service. The results also suggested a viable pathway for scale. Farmers reported that they would be willing to pay US$2 for a nine-month subscription to the advisory service, which researchers estimated to be below the cost of providing the service at scale.

Together, these two randomized evaluations suggested that farmers had unmet demand for locally-relevant agricultural information and advice, and mobile extension could provide an efficient and cost-effective platform to impart the knowledge farmers needed to optimize their practices and increase their yields.

Precision Agriculture for Development (PAD) drew on the rigorous evidence of the impacts of mobile extension to create and diffuse a new model for extension: reaching farmers with personalized agricultural advice through their mobile phones.

Based, in part, on the above research, Shawn Cole, Michael Kremer, Dan Björkegren, and Heiner Baumann co-founded Precision Agriculture for Development (PAD) in 2016 as a non-profit organization with a mission to support smallholder farmers in low- and middle-income countries by providing customized information and services that increase productivity, profitability, and environmental sustainability.

PAD’s initial service offerings largely mirrored those found to be successful in the randomized evaluations in India and Kenya—they continue to deliver tailored agricultural information to smallholder farmers through two-way SMS and voice communications and to aggregate information via mobile phone platforms. The content and delivery is customized based on the agricultural conditions, the characteristics of the farmers involved, and the weather and pest risks that farmers face, as well as the priorities of the partner, among other factors.

PAD now partners with organizations spanning the public, private, non-governmental, and multilateral sectors to leverage insights from research and to scale effective ideas through two streams of work. As one approach, PAD designs, builds, and scales mobile extension services on behalf of partners, while generating evidence on best practices for implementing mobile extension and helping its partners to apply these best practices and adopt a culture of evidence use. As a second approach, PAD works with partners to improve their existing mobile extension services by iterating and optimizing through the use of rigorous experimentation and data analysis. Iterating and learning through farmer feedback and rigorous research are core to PAD's operating model, and PAD shares the learnings of this research as public goods.

Since its launch in 2016, PAD has rapidly expanded into new geographies and widened the scope of information that it provides to smallholder farmers. As of the end of the third quarter of 2020, PAD served 3.56 million farmers across nine countries in Africa and South Asia in collaboration with 27 partners. The scope of PAD’s advisory services has expanded to address a range of challenges and opportunities in agriculture, such as improving soil health to boost productivity in India; improving Ethiopian farmers’ dairy and animal husbandry practices as a means of increasing their productivity and incomes; using digital systems to empower women and catalyze investments in nutrition in the Indian state of Odisha; and helping farmers in Kenya protect their crops from Fall Armyworm, an invasive pest that attacks maize.

With a goal of improving the lives of 100 million farmers, PAD is committed to innovation, iteration, and evaluation as it scales its services. Together, PAD and its partners assess different variations of information delivery and seek to understand what types of farmers benefit from different models. In addition to using randomized evaluations to measure the impact of its services on farmers’ adoption of recommended practices, yields, and incomes, PAD also regularly runs A/B tests and collects farmer feedback to create rapid informational feedback loops. PAD also emphasizes learning about cost-effectiveness: when delivered at scale, mobile information delivery is associated with much higher benefit-cost ratios compared to more intensive programs like traditional extension. In 2020, Givewell identified PAD as a “standout charity,” in part due to their commitment to ongoing research and transparency.

2Training & Visit (T&V) refers to a popular model in which field extension workers are regularly trained and visit farmers at their farms on a set schedule. For more information, see the FAO’s webpage on the “Definition of Several Extension Models.”