Belief Formation of Risks of Arsenic in Bangladesh

Policymakers have increasingly seen information disclosure and “labeling campaigns” as a low-cost way to help people avoid environmental exposures, especially in resource-constrained developing countries, yet, there is little evidence on how to present environmental health information in ways that best motivate health-improving behaviors. Researchers compared the effects of two types of arsenic risk information on households’ choice of their primary drinking water source. Providing households with more nuanced risk information about arsenic levels in drinking water had no effect on whether they switched to use a safe well.

Environmental exposures like contaminated groundwater have led to widespread health problems in many countries. Policymakers have increasingly seen information disclosure and "labeling campaigns" as a low-cost way to help people avoid environmental exposures, especially in resource-constrained developing countries. If contaminated sites are clearly labeled "unsafe," and people choose to avoid them, information and labeling campaigns could potentially improve their health. Yet, there is little evidence on how to present environmental health information in ways that best motivate health-improving behaviors. Are campaigns that provide more complete, yet complex information about environmental risks more effective than those that give simple safety thresholds?

The natural occurrence of arsenic in groundwater is an important public health concern in Bangladesh, where it is has been estimated that between 35 and 77 million people are at risk of drinking water containing unsafe levels of arsenic, primarily from shallow tube wells. Exposure to elevated levels of arsenic in water is associated with cancer, developmental effects, cardiovascular disease, skin lesions, deficits in childhood cognitive and motor function, and mortality. No known level of arsenic exposure is completely safe. The most common option to avoid arsenic poisoning in Bangladesh is switching to an uncontaminated well, followed by the construction of deep tube wells. Other options such as piped water systems, rainwater collection, and arsenic filters are used by a very small portion of the population due to their high cost.

The magnitude of the arsenic problem in Bangladesh became evident after almost five million wells were tested by the Bangladesh Arsenic Mitigation and Water Supply Program (BAMWSP) beginning in 1998. The results of the BAMSWP arsenic tests were used to label the wells using a binary system. Wells with arsenic levels in excess of the Bangladesh health standard (50 micrograms per liter) were labeled "unsafe" and painted red, while those with arsenic levels below 50 micrograms per liter were labeled "safe" and painted green. While it has significantly increased well-switching throughout Bangladesh, the binary system may prevent people from making the healthy choice to switch from a highly-contaminated well to a less highly-contaminated well if there is no safe well nearby. Research has shown that health benefits can result from any decrease in arsenic exposure, yet the binary system only encourages switching from a red to a green well. 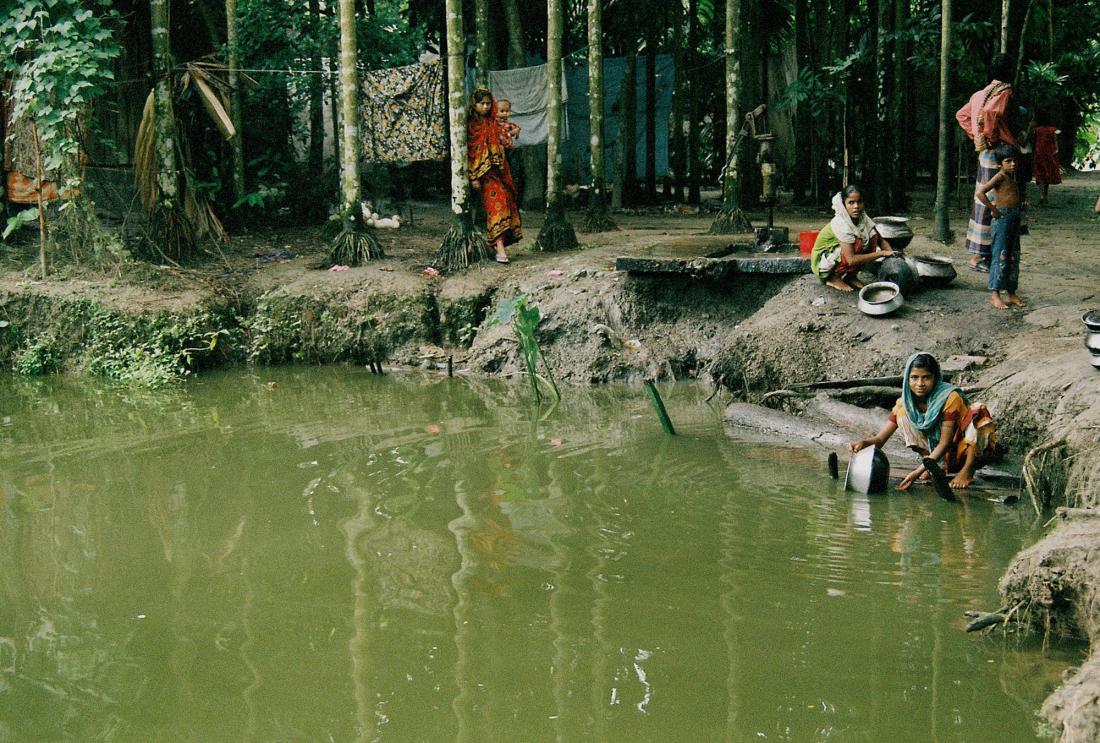 Researchers compared the effects of two types of arsenic risk information on households' choice of their primary drinking water source. In early 2008, wells in 43 villages in Araihazar sub-district were tagged with laser-engraved aluminum plates displaying a pictorial representation of whether the well water was suitable for drinking. The plates show a hand holding a drinking cup that is covered by a large cross when the arsenic level is above 50 micrograms per liter. It also indicates the year when the water sample was collected and the specific arsenic concentration detected in the water tested from that well. Villages were randomly assigned to receive one of two additional information treatments.

Status-quo villages:Received information similar to the information delivered by BAMWSP. Survey staff told households in these villages that, "The federal government says drinking water with more than 50 micrograms arsenic per liter is not safe. When possible you should seek to fetch drinking water from a well that is labeled safe."

A follow-up survey was conducted in November 2008, between seven and nine months after the information was first delivered.

One primary policy implication of this finding is that messages conveying richer information on arsenic risks, while inexpensive and easy to scale, are unlikely to be successful in reducing exposure relative to the status-quo policy of providing a simple indicator that a well is safe or unsafe. However, a more sophisticated presentation of the risk spectrum on the aluminum plates installed on wells, showing gradients that represent the level of arsenic in the well relative to others in the village, may have greater potential to induce well-switching.