In many contexts, citizens often lack important information about their elected representatives’ policy platforms. This is a particular challenge in political environments where politicians buy or bribe voters. Researchers evaluated a nationwide debate initiative in Liberia designed to solicit and rebroadcast policy promises from legislative candidates. By encouraging debate participation more strongly in some districts than in others, researchers evaluated the impact of debate participation on citizen political engagement, voting behavior, and candidate electoral outcomes. Results indicated that when leading candidates participated in debates, citizens were more engaged and informed. Electoral benefits accrued to incumbent candidates, who were better at self-selecting into debate participation than their less experienced challengers.

In strong democracies, if a politician makes a promise and fails to keep it, citizens have the power to vote that person out of office or to exert other forms of pressure to encourage better performance. In many contexts, however, a lack of willingness among politicians to commit to policy promises can negatively impact democratic accountability. In clientelist systems—wherein politicians offer goods, services, or money in exchange for votes—candidates have limited incentives to make promises to their constituents that could restrict their ability to deviate once in office.

One particularly effective way to enhance accountability in these settings may be to encourage political candidates to participate in debates in which they must publicly commit to policy platforms. Participation in such initiatives is a strategic decision by candidates, who prior to the event may face uncertain or possibly negative returns to engaging. Particularly when scaled up, these participation decisions might have important effects on the overall effectiveness of debate initiatives in informing and empowering voters. Researchers, in partnership with USAID and Internews Liberia, sought to understand how increasing the supply of policy promises from candidates, through debates where candidates self-selected into participation, impacted citizens’ political engagement, voting behavior, and, ultimately, candidate outcomes.

Since its emergence from civil war in 2003, Liberia has held three House of Representatives elections. In October 2017, a total of 984 candidates from 26 different political parties ran for office in each of Liberia’s 73 electoral districts, with anywhere from three to 28 candidates per district. Candidates generally came from Liberia’s elite class, were more educated on average, and were predominantly male.

Candidate campaigns broadly lack policy platforms, focusing instead on non-credible promises of local development delivered through on-the-ground campaigning and vote buying. Vote buying occurs often in Liberian politics—a 2015 USAID survey indicated that 35 percent of respondents received money in exchange for their vote. Once in office, legislator performance is often poor. Dissatisfaction with incumbent performance is widespread, with 68 percent of citizens in 2015 disapproving of their representative’s performance, and 38 percent believing that their representatives never listen to what citizens say. 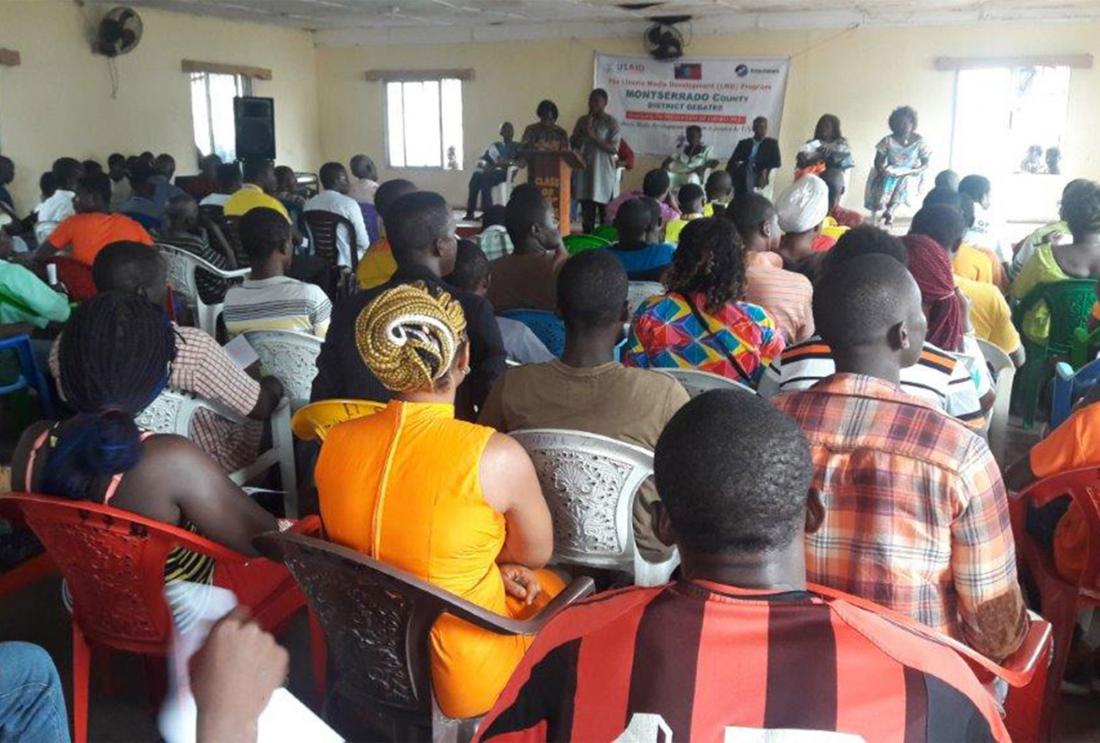 Researchers conducted a randomized evaluation to understand how increasing the supply of policy promises from candidates, through invitations to participate in public debates, impacted citizens’ political engagement, voting behavior, and, ultimately, candidate outcomes.

The international media NGO, Internews, partnered with several Liberian journalist associations to organize and broadcast debates across Liberia, intended to encourage candidates to make policy promises in public forums. A total of 129 debates took place in Liberia’s 73 districts from mid-August to mid-September 2017, prior to the October elections. Researchers randomly varied the intensity with which candidates were encouraged to participate in the debates. All candidates received an invitation to participate, but approximately half were randomly assigned to receive multiple invitations.

The debates were broadcast to the electorate by at least one of 43 Internews-selected community radio stations. Radio stations are a potentially important source of access to political information in Liberia: radio ownership is high at 83 percent, and 62 percent of Liberian respondents reported listening to news on the radio every day. Researchers estimate that nearly 90 percent of the population was covered by a signal from one of these stations. The majority of citizens who listened to the debates tuned in during one of the rebroadcasts in the days leading up to the election.

The invitation intervention led to an increase in the share of candidates attending the debate, particularly among leading candidates, and improved citizen exposure to and knowledge of candidate platforms. This heightened exposure led more citizens to demand political information and discuss their vote choices.

This suggests that democratic initiatives designed to enhance competition and shift the political environment away from clientelism should ensure that candidate incentives are aligned towards participation and that less experienced candidates receive additional training to create a more level playing field.

Candidate Participation in Debates:The invitation intervention led to a 7.7 percentage point (14 percent) increase in the share of total candidates participating in the debates in high-effort districts, from a base of 54 percent in low-effort districts. The intervention had the largest effect on incumbents and the most viable challengers (previously identified as having a genuine chance of electoral success). Researchers found no effect on the participation rates of non-incumbent and less viable challengers.

Internews will use the lessons from the evaluation to inform the design of future electoral debates in Liberia. This includes an increased emphasis on training candidates for debate participation, improving mechanisms to encourage their participation, and rethinking the relative intensity of radio rebroadcasting to use. The system used to verify the debates’ radio airplay has subsequently been used for other program activities. The intervention’s structure also created new opportunities to monitor a candidate’s performance once in office: standardized debate questions and transcripts are being used to track the implementation of promises made by candidates in the debates. These ongoing efforts, in partnership with the Daily Observer newspaper, are online at liberiapromisetracker.com.